HomeLatest NewsChristmas Lottery: Which Michelin restaurant to eat if I get a pinch?
Latest News

Christmas Lottery: Which Michelin restaurant to eat if I get a pinch? 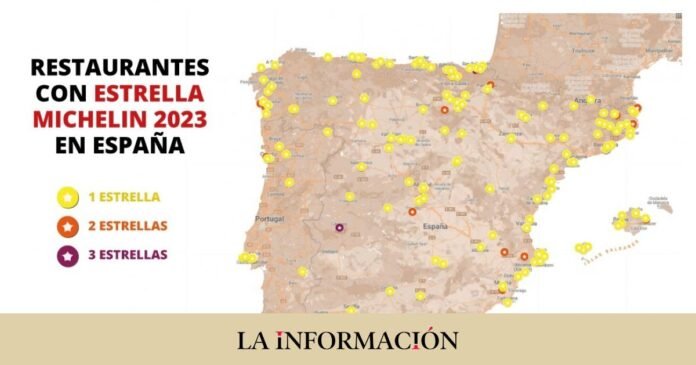 This Thursday, December 22, the day of the Christmas Lottery, it is easy to predict what we are all doing: some with their faces glued to the television screen, others will have the radio at full volume for the entire office to hear and There will be some even following the draw on Twitter, each and every one waiting for luck to fall on our tenth, or all of us who have wanted to play. Although the best Christmas gift we receive is to win the Gordo, and thus have the check for €400,000 per tenth in hand, the chances of winning it are 1 in 100,000, according to a study by mathematician Daniel Pérezático.

It is true that when you invest in a tenth, you always do it thinking big, fantasizing about spending €400,000 on a home, a car or even going around the world. However, if the jackpot has already come out, we remind you that 2,520 million euros are distributed in this extraordinary draw. So nothing to turn off the television if you do not win the jackpot or the second or third prize.

But the prizes do not end with the jackpot, the fifth prizes are divided into 8 different numbers, €6,000 that you could win only with the payment of 20 euros that costs a tenth. And if not, you can always be lucky enough to get a pinch with a stone (€100 per tenth) and let’s not forget the approximations of the first three prizes, with which you can also win another €100.

And what to do if you get a pinch of the Lottery?

From here we offer you a list of the best restaurants in Spain with Michelin stars where you can give yourself a tribute and drown the disappointment of not having been a little more fortunate.

Dabiz Muñoz is the genius behind DiverXO. After his visit to other acclaimed restaurants such as La Viridiana, Catamaran and Chantarella. In 2007 he opened his own restaurant that was instantly successful due to his peculiar proposals. DiverXO offers complex fusion cuisine, with various techniques and products from different cuisines.

How much does a dinner cost at DiverXO?

DiverXO offers complex fusion cuisine, with various techniques and products from different cuisines. There is only one menu ‘La cocina de los cerdos’ on the menu for a price of €365, if you also choose to taste the pairing add another €300. To start a parade of appetizers under the name ‘The roller coaster of DiverXO’, five dishes inspired by Southeast Asia.

At the end, up to 20 main dishes begin to arrive at the table, such as the roasted Iberian lamb churrasco with vine shoot embers, fried lamb milk and stewed cheek with spectacular truffle or its most artistic dish, the ‘Galician lobster dawning on the beaches of Goa ‘ Served in three parts, roasted with buffalo milk skin and flowers, with Indian salmorejo with lobster claws and with vindaloo head with huacatay. To finish, a dessert of your choice, such as the ‘Toasted butter risotto with black truffle’. Of course, if you want to go to DiverXO, we recommend that you book well in advance.

For those who are not devoted to such formality and exquisiteness or who have not been lucky enough to win even a stone, we remind you that Muñoz opened the local StreetXO in 2009, in the Gourmet Experience of El Corte Inglés on Calle de Serrano, a proposal more casual than DiverXO.

How much for Dani García’s BiBo Madrid brunch?

Dani García is known for combining in the same dish the products of his land, Andalusia, together with the techniques and ingredients of the most international cuisine. He began his career in the kitchen at the hands of Martín Berasategui and has already achieved up to 3 Michelin stars in the many restaurants that he has opened.

In 2016, BiBo Madrid opened in the Paseo de la Castellana, which became popular for its brunch menu priced at €75 for two people. The menu includes dishes such as oxtail brioche or smoked salmon and spiced béarnaise egg benedictine, it also includes a dessert that he calls ‘Nutella to die for’ for those with a sweet tooth. This experience is only available on Saturdays and Sundays from 11:00 a.m. to 11:30 a.m. with a duration of 1h30m.

How much does a menu cost at Celler de Can Roca?

The Roca brothers’ restaurant, located in Girona, is a project that is constantly evolving, with menus specifically designed for each year. This 2022 we find 2 options: the tasting menu or the festival menu. Of course, if you choose this restaurant, be prepared for a meal lasting at least 3 hours. Also, if your mouth is already watering and you have decided what you are going to spend your prize in this restaurant, keep in mind that it closes from December 23 to January 17, 2023.

The Tasting Menu consists of nine dishes that pay homage to the sea and the mountains and are made from products as original as plankton. Dishes such as ‘Toda la prawn’ which consists of a prawn marinated in rice vinegar, crispy legs and seaweed velouté, the Pularda Pithivier with summer truffle and fresh herbs sauce or the dessert of white elderflower, acacia, orange blossom , soursop, lychee, green apple. All this for the price of €215.00, per diner.

Share
Facebook
Twitter
Pinterest
WhatsApp
Previous article
The Kremlin reacted to Rogozin’s injury: “Yes, there is a risk. But officials are required to travel to new territories.”
Next article
Ramzan Kadyrov’s son will make his MMA debut on December 23 in Moscow KXan 36 Daily News