HomeLatest NewsChristmas movie calendar: what to see during the weekend in January
Latest News

Christmas movie calendar: what to see during the weekend in January 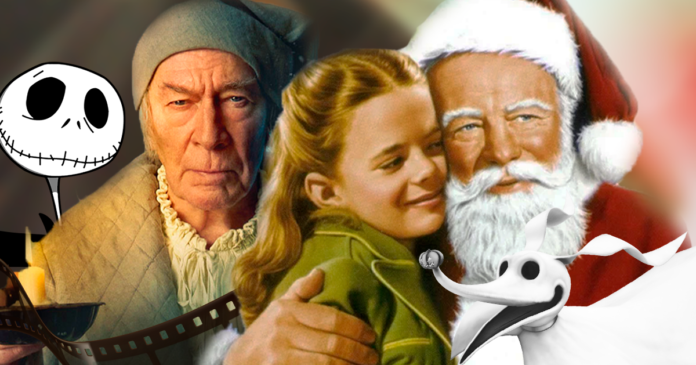 For everyone, the main New Year’s film is their own. Some people can’t imagine the festive atmosphere without Love Actually, some need to rewatch The Irony of Fate on December 31, others organize a multi-day Harry Potter marathon. We will master the undisputed New Year’s classic without prompts. But for those who want to dilute the standard film program, BURO. together with Tele2 they prepared a list of films of eight different genres for each day of the festivities.

Everyone strives to spend the first day of the year as lazy as possible. Wake up at noon, stay in your pajamas all day, eat yesterday’s salads while watching a good light movie. For these purposes, an animated musical by the gloomy narrator Tim Burton is perfect. The protagonist of the cartoon Jack rules the kingdom of Halloween nightmares. In it, monsters and freaks spend all their time coming up with ideas on how best to scare people on Halloween eve. But one day, Jack accidentally ends up in Christmas Town. An atmosphere of joy and goodness reigns there, and the inspired hero decides to rethink his mission and also bring happiness to people. To do this, he tries to recreate the Christmas atmosphere of his city, whose inhabitants are not at all used to good deeds.

After recovering from the New Year’s celebration, the girls want to treat themselves. Throw a bachelorette party, try new beauty products with friends, chat over a glass of sparkling wine. Under such a mood, watching a New Year’s romantic comedy is perfect.

Kate works as an elf in a store, abuses alcohol, constantly makes wrong decisions and seems to have given up a long time ago. Her family and friends are unable to convince her to take control of her life. But on Christmas Eve, the girl meets a boy who manages to get close to the main character and help her remember her dreams.

The holidays are the perfect time to sit down and spend your days in front of a screen watching your favorite and new movies and series. Visiting parents, at the next dinner with friends or just on a date with yourself – now Tele2 subscribers have the opportunity to watch movies anywhere and anywhere. You can include home Internet services in your usual mobile communication tariff and watch tons of movies and TV shows on the Wink video service, even on the road, even on a computer, even on a big screen.

The third day of vacation is the perfect time to get a group of friends together, order pizza, and watch an old-school horror movie together.

A horror comedy directed by Steven Spielberg and Chris Columbus about hilarious furry creatures that turn into little monsters when mistreated. On Christmas Eve, the protagonist receives an unusual animal named Magway as a gift, which quickly becomes a family favorite. However, there are three rules: lovely ears must be protected from sunlight, do not get wet and do not feed after midnight. Having broken one of the rules, the protagonist attracts a crowd of little gremlins to his town, who turn Christmas into a nightmare.

In the middle of the holidays, I want to spend time more actively. Skating rinks, exhibitions, walks through snowy parks. An ideal end to a busy day will be an afternoon watching a good and witty movie. Like a comedy thriller directed by Martin McDonagh.

Having failed their mission in London, two professional assassins, Ken and Raymond, move to Little Bruges on the eve of the holidays. There they plan to sit quietly, awaiting further instructions from the boss. Ken sees this respite as an opportunity to relax, visit museums and cathedrals. However, his young colleague, who is depressed, is not encouraged by the beauty of the city. Therefore, Ken and Raymond argue and tease each other constantly.

When it’s snowy and cold outside, the best idea is to wrap yourself in a blanket, make tea or hot chocolate for the whole family, and rewatch classic episodes of your favorite sitcoms together. On this day, you can turn on New Year’s specials from The Clinic, The Sopranos and House MD to see how the heroes of the series celebrated Christmas and they will cheer you up.

At least one day of the January weekend should be set aside for yourself, to arrange a quiet evening alone with you and a great movie.

Psychological drama and last film by the mythical Stanley Kubrick, whose events take place on the eve of the Christmas holidays. The Harford spouses revolve in the highest circles of New York society and from the outside they seem to be an ideal couple. However, in their relationship there are quite a few reluctances, resentments and regrets. A closed masquerade party, which a husband and wife attend on New Year’s Eve, gives them a reason to open up to each other from a new side and start talking frankly about their desires.

Christmas dinner is a wonderful occasion for the whole family to come together. In the meantime, the preparations are being made and the salads are being cut, you can put a kind and bright Christmas movie in the background to cheer you up.

On Christmas Eve, a large department store organizes a parade, the central character of which, of course, must be Santa Claus. However, shortly before the start of the holiday, it turns out that the actor playing the grandfather is completely drunk. The event organizer, Doris, has to improvise and take on this role as the first bearded old man to come across. She fits perfectly into the image, and he is taken to work in the store. There he soon meets little Susan. The girl does not believe in Santa Claus, since her mother explained to her a long time ago that the bearded man who brings gifts to children does not exist. However, she will have to discover that it was him she met face to face in the store and he will be able to help her realize her most intimate dream.

The weekend is coming to an end, and before the start of the working week a last charge of positive energy is needed. As the final film of the Christmas marathon, a life-affirming comedy is perfect. For example, the New Year’s almanac directed by Garry Marshall “Old New Year” with a galaxy of Hollywood stars such as Robert De Niro, Halle Berry, Til Schweiger, Zac Efron and many others.

New York on New Year’s Eve intertwines the lives of the main characters: an old man who dies in a hospital, a secretary who decided to keep her promises to herself, the producer of the famous New Year’s show, a person who generally hates these Vacations. In just one day, from December 31 to January 1, their lives change drastically.

Tele2 customers can choose where and on which device to watch their favorite movie. And you can also organize a family movie at home: everyone together choose a movie, make themselves comfortable, stock up on popcorn and connect a good Internet connection at home. Tele2 can definitely help with the latter, offering the opportunity to add it to your regular rate.

THE MATERIAL IS PREPARED