HomeLatest NewsChristmas trees after the holidays will be fed to cows, sheep, monkeys,...
Latest News

Christmas trees after the holidays will be fed to cows, sheep, monkeys, lions and leopards for fun KXan 36 Daily News 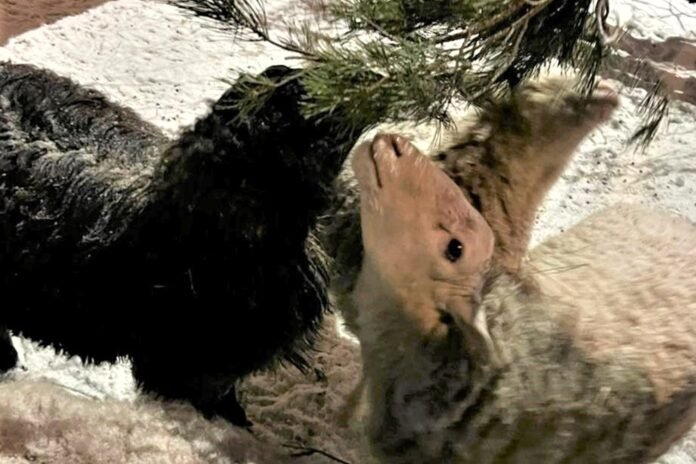 In Khabarovsk, from January 10 to 31, the Sysoev Amur Zoo opens three reception points for coniferous beauties. They will be placed in the mall and in the zoo itself. And in Komsomolsk-on-Amur, eating from January 9 to 15 is organized by the Piton Zoo. “We will open two reception points,” said Olga Galaneva, head of the cultural and educational department of the zoological center.

In Yaroslavl, the local zoo has been accepting “used” Christmas trees for several years. A campaign to collect these trees is usually announced towards the end of the New Year holidays. And the residents of Yaroslavl are very active in responding to this.

“Coniferous trees contain a lot of vitamin C and are used as an additive in the diet of animals,” said Nazyrkul Dautkulov, official representative of the Yaroslavl Zoo. In Pyatigorsk (Stavropol Territory), the freshest and greenest needles will be prepared for shipment to one of the zoos and a horse shelter in the Grachevsky district.

And in Ulyanovsk, even one of the regional operators responsible for the disposal of solid household waste was engaged in “animal feed”. A year ago, the company agreed with the zoo. And now, for the second time, you will provide a variety of diets for local pets with the help of a coniferous menu. “We are constantly looking for ways to dispose of waste for the benefit of the environment,” says Olga Maryeva, director of Ekostandart Management LLC. “This year, the Ulyanovsk Zoo administration met us halfway. They are ready to accept a large lot of pine trees for their pets. Such an interaction is beneficial to both parties.”

There are more than 120 species of animals and birds in the Ulyanovsk Zoo. “Artiodactyls eat pine needles with pleasure, in addition, we use pine branches to build shelters for birds: pheasants, eagles, owls,” said Denis Savrandeikin, director of the zoo. We gladly responded to the regional operator’s proposal to bring us several carts of Christmas trees and pines at the same time”.

The Perm Zoo will also start accepting Christmas trees. They take them for food and other needs. Only here the zoo accepts those Christmas trees that remained unsold in the markets. They are not taken from private dealers, as they are clogged with remnants of jewelry. Every year, after the New Year’s hype, the Christmas tree markets bring unsold trees by whole cars to the Yekaterinburg Zoo.

In Tomsk, coniferous trees go to cows. Here every year there is a collection of Christmas trees and pines left by the townspeople after the New Year holidays. The trees are sent for the manufacture of vitamin meal to feed young and pregnant cows. The ecological action “Christmas trees for cows” will take place for the eleventh time. Up to three thousand dismantled coniferous trees are harvested for vitamin feed for animals.

In Penza, the zoo accepts about a thousand Christmas trees after the holidays. Here the branches are mainly used as covering material for aviaries. But some trees are put in the snow, to the amusement of the beast. Even monkeys rejoice at Christmas trees and jump on them no worse than on palm trees. Leopards, lions and other cats sharpen their claws. And the goats feast on the bark and even prickly needles.

Also in the Penza region, large livestock farms take away Christmas trees. They advertise pickup and collect them independently at bin sites. After grinding, the needles are used as complementary foods.

How to prepare Christmas trees for animals

Before delivery, the coniferous tree must be cleaned of tinsel and New Year’s toys.

It cannot be treated with fragrances and chemicals.

Yellowed or fallen spruce, fir and pine are also not suitable, since they cannot be used as animal feed.

Branches, sawdust and shavings from processors are also accepted, but only without fragments of fiberboard and chipboard and other artificial additives from furniture industries.

However, some experts doubt the benefits of the Christmas tree diet for animals.

“Feeding animals with Christmas trees is a dubious story,” says Vladimir Kozhevnikov, director of the Stavropol Botanical Garden. “I don’t know of any animals other than deer or elk that eat needles. According to him, there are other ways to get rid of Christmas trees: “The only option that will not harm anyone is to cut down Christmas trees, make crumbs (mulch) that can be sprinkled on the paths and cover the ground where the trees grow. . the practice is possible in parks and squares”.

By the way, this is also done in the regions. As for the usefulness of the Christmas tree diet, judging by the fact that the collection of coniferous trees for zoos and farms takes place for several years, the animals do not complain.