Cities of the future: incredible metropolises appear on the world map 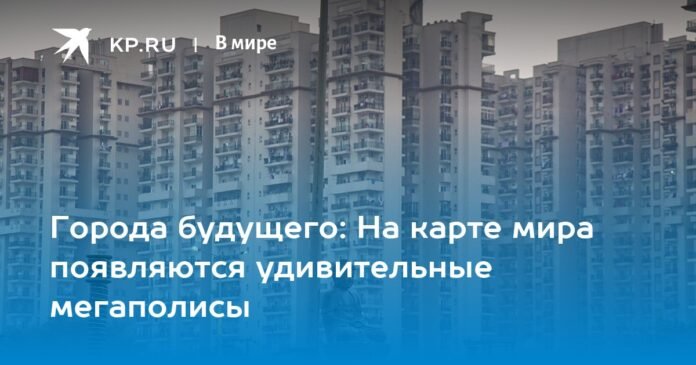 Noida has gradually turned from a city of the future into a large commuter community of Delhi.

Since ancient times, many people have preferred to live in cities. The oldest of them on Earth, according to various sources, are Syrian Damascus, Palestinian Jericho, Greek Athens, Egyptian Luxor.

It is easier to live in cities: it is easier to access education, healthcare, various services and entertainment in them, and the job market is more diverse in cities. In the end, the city is simply more comfortable and safer.

Rural-to-urban migration has repeatedly been a driver of economic growth in all parts of the world: newcomers need more housing, cars, infrastructure, and jobs; All this causes positive changes in the economy. And many cities have turned into huge multi-billion megacities, and Singapore, for example, has turned into a city that has occupied the territory of an entire state.

But something has changed in the modern world, and in the usual ranking of the largest cities in the world, in which until recently everyone would like to move, the main megacities began to dramatically lose their positions. People are fleeing New York because of the explosive growth in crime, Singapore because of the unbelievably high cost, Los Angeles is occupied by the homeless and drug addicts, London by refugees; the Chinese have gone overboard with coronavirus restrictions in Shanghai and Guangzhou, and not-so-clean Cairo has never been a draw for connoisseurs of city life.

The palm in the field of attractions and prospects of the Big Apple City, Dubai and Tokyo has already been intercepted by other points on the world map.

The new financial center of India, located between the capital of the state of Gujarat, Gandhinagar and Ahmedabad, does not yet have a name. An oasis made up of skyscrapers that shine in the sun is called GIFT-city. The largest banking conglomerates from around the world have already opened their representative offices here, and the amount of capital attracted here is 33 billion dollars.

The new financial center of India, located between the capital of the state of Gujarat, Gandhinagar and Ahmedabad, does not have a name yet

The Government of India conducted an experiment by opening a free economic zone, which is reportedly the fastest growing economy in the world with a turnover of 3 trillion. dollars and did not need. Critics, among other things, predicted the failure of GIFT-city, if only because in Gujarat, which is the birthplace of Mahatma Gandhi, the sale of alcohol is prohibited. And financiers call vodka, wine and whiskey the lubricant for almost all transactions. But GIFT-city, the foundation stone of which was laid in 2014, is growing at a record pace: branches of not only hundreds of foreign banks have opened here, but also campuses of prestigious universities, stock exchanges, branches of the best clinics, offices of insurance companies and stores of prestigious brands. Indian President Narendra Modi gave this city a special place and said that “India’s vision of future is associated with GIFT city”.

The “occupation” of GIFT-city by those who wish to live and work in this city is advancing at such a record rate that one of the most sought-after services in it is the charter of private planes that transport expatriates and their families here. . with all his assets. Foreigners say that this city has everything for successful work: the presence of a clear development plan and the almost complete absence of bureaucracy. There is everything for a beautiful life: many restaurants, cinemas, sports clubs and shops for every budget.

The construction of GIFT-city is not the first attempt by Indians to build a city of the future in their country.

The capital of India, New Delhi, can claim the title of the least standard in the world. And all because it is only a part of the city of Delhi. But it is in New Delhi – government offices, foreign embassies and all the other attributes of the main city of the country. But the overpopulation of the Delhi agglomeration (now more than 18 million people live in this city) began to be felt back in the 70s of the last century. And it was decided that a new, modern settlement will appear in the metropolitan suburb of Okkhle. There was no need to choose a name, since the sound of the acronym NOIDA – “New Okhla Industrial Development Authority (New Okhla Industrial Development Administration)” – everyone liked, and it was decided to call the new city Noida.

It seemed that Noida’s infrastructure was carefully thought out and was supposed to become the standard of modern urban planning. But the explosive growth of the Indian economy in the 1990s led to a massive migration of rural residents to the cities, and to cope with the influx of people, Noida is gradually turning from the city of the future into a huge residential district of Delhi. . where the vast majority of Noids go to work every day, creating havoc on the roads.

It was not the coronavirus that became the main reason for the peculiar redistribution of the popularity rating of American megacities, but the emergency behavior of the authorities in New York, San Francisco and Los Angeles. They so zealously pledged to care for the poor and homeless, putting them up in expensive hotels during the pandemic and providing them with everything, including free laptops, that mayors and governors had no choice but to dramatically increase taxes. Surprised by such “care”, the representatives of the middle class began to massively exchange one city for another.

American urban planners, analyzing such unexpected migratory flows, were sure that Miami or Houston would become the new “New Vasyuki” in the United States. But this did not happen: the meteorological factor intervened. The coasts of Florida and Texas are regularly tormented by hurricanes. Living there is comfortable, but to some extent unsafe: humanity has not yet learned how to deal with hurricanes.

Austin is one of the few American cities where the vast majority of the population is still white and the crime rate is very low.

Texas Austin, located far from the seas and oceans, had no hope of a rapid influx of population, if not for Elon Musk. The billionaire, whose corporate headquarters were located in California, said he was tired of the chutzpah of the Golden State governor, who kept raising and raising taxes. Musk decided to move to Austin and urged everyone to follow his example. The town, whose population, together with the entire conurbano, barely reached 900 thousand people, in the blink of an eye became a millionaire.

Musk’s choice was not accidental: Austin has always been considered the center of American liberalism. It’s also one of the greenest cities in America, and in recent years has also become a major competitor to Silicon Valley, the world’s high-tech hub. Musk never talked about it, but everyone knows that Austin is one of the few American cities where the vast majority of the population is still white and the crime rate is very low.

city ​​of the future

A couple of years ago, it was out of the question to see the beauties of Saudi Arabia at least with one eye – some visas to visit this country were issued only to diplomats and Muslims performing Hajj. But with the strengthening of power of Crown Prince Mohammed bin Salman Al Saud, who recently headed the kingdom’s government, a lot has changed. Now foreigners can come to Saudi Arabia as tourists and will soon have the chance to become residents of the Saudi city of the future. The prince is sure that Neom will be many times more beautiful and attractive for life than neighboring Dubai.

As envisioned by the architects, the city of Neom will eclipse the glory of all the wonders of the world combined. More than 5 million people will live in it, and the first stage of construction will be two parallel skyscrapers. The buildings will continuously stretch for a record 120 km. They will have everything: apartments, offices, shops, even a football stadium. It will take 15 minutes to get from one end to the other on a high-speed train. All of this will cost an incredible $1 trillion. dollars, and it will be put into operation very soon, in 2030.