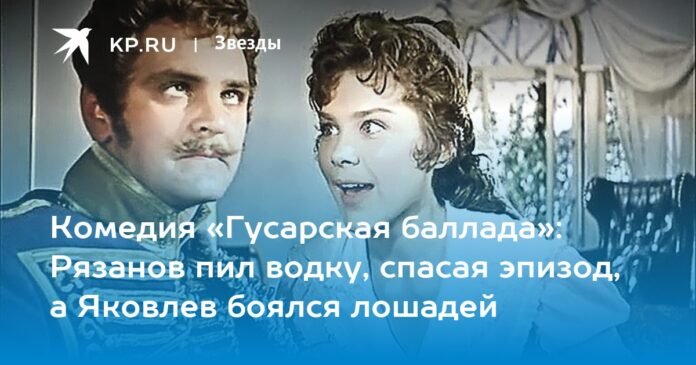 – I will ask you one more question: do you like to cry? – Three thousand devils!!! Photo: Still from the film.

In 1962, the film by Eldar Ryazanov “The Hussar Ballad” was released. The actors who played the main roles woke up famous, phrases went to the people, and folklore was enriched with anecdotes about Lieutenant Rzhevsky.

The ballad in the film is 60 years old, but Alexander Gladkov’s play “A Long Time Ago”, which became the basis for the film, is much older. It was written in 1940, and in 1941 it was staged on the stage of the Central Theater of the Red Army. But the play was not successful in the theater. Eldar Alexandrovich, who had a special gift for hits, shortened the text a little, redid something and made a wonderful film.

For the main role of Shurochka Azarova, the director planned to take Alisa Freindlich, she came to Moscow several times to audition, and no one doubted that the role was in her pocket. However, at the last moment in Shurochka, the director approved the unknown GITIS sophomore Larisa Golubkina, for whom this was the first appearance on the screen.

The director apologized to Alisa Brunovna: “Your indestructible femininity is not good for me. I need… a boy! And he promised to take it off in another photo. Needless to say, I didn’t cheat.

In order for the image of the young cornet to be reliable, Golubkina was forced to walk all day in a men’s suit and develop a man’s gait. Larisa Ivanovna herself admitted that she received great pleasure from the filming process and horsemanship training. Of course, she became an expert in horseback riding, but her professionals did the tricks for her. Do you remember the scene when the heroine Golubkina jumps into the carriage in which the captured general is being transported? This trick instead of the actress was performed by the circus rider Vasily Rogovoy. In the roles of other hussars, members of the equestrian group of Mikhail Tuganov, who was the director of the equestrian scenes, stood out.

Comedian for the role of Kutuzov?

– A girl would be more beautiful… Photo: Still from the film

Difficulties also arose with the approval of Igor Ilyinsky, the famous comedian, for the role of Kutuzov. Shortly before the “Ballad” he played the little tyrant Ogurtsov in “Carnival Night”. Eldar Ryazanov recalled:

– Minister of Culture Ekaterina Furtseva was outraged after the first show: “When Kutuzov appears on the screen, the audience laughs! We have to reshoot all the winter scenes!”

But Eldar Ryazanov is not one to give up quickly. The cunning director decided to show the picture to Alexei Ivanovich Adzhubey, the editor-in-chief of Izvestia and at the same time Khrushchev’s son-in-law. The trick worked – a laudatory review was published in the Nedelya newspaper supplement, in which Ilyinsky’s work was especially singled out. After this, no one thought that these scenes should be reshot with someone else.

The close-ups of the hussars singing the song “A Long Time Ago” were not filmed on horseback at all. The actors sat in the truck and jumped to the beat, as if they were jumping. And at that very moment, Ryazanov, who was in another car, noticed how the actors, who had played their scenes, generously poured a glass of vodka to Nikolai Kryuchkov, who had not yet entered the site. A bright picture instantly arose in the director’s head, how it could all end. In the blink of an eye, he jumped out of the truck, rushed to Kryuchkov, snatched the glass from his hands and shouted: “Your health, Nikolai Afanasich!” -and he drank its fiery contents in one gulp. The stage has been saved.

Eldar Ryazanov admitted: when the actors were auditioning for the role of Rzhevsky (Vyacheslav Tikhonov, Sergei Yursky and Alexander Lazarev, Sr. also claimed it), he asked Yuri Yakovlev if he knew how to ride a horse. The actor assured: yes, I was born in the saddle! And now it is necessary to remove the attack, he took a horse to Yakovlev.

– From the way he looked at her, I knew I was seeing her for the first time! And there, in the episode, it was necessary to ride not even at a gallop, but at a quarry (the fastest movement of a horse. – Ed.)! – recalled Eldar Alexandrovich.

But in fact, there was nowhere to go, Yakovlev, with the help of his colleagues, climbed into the chair. The first experiments were not very successful: several times Yakovlev ended up on the ground. But after a couple of days, the actor decently kept in the saddle and, I must say, perfectly played the scene of a furious horse attack.

The film crew of “Hussar Ballad” poses in full force in the interiors of the landlord’s estate created from scratch. Photo: personal archive

Great difficulties arose for the film group with the search for the old estate.

– Some of the events took place on the farm of a poor landowner. Oddly enough, finding a suitable nature turned out to be quite a difficult task, Eldar Aleksandrovich wrote in his memoirs. – After a long search, we came across a forest of centuries-old linden trees. The grove was home to a ruined church and a pond covered in duckweed. We decided that we would rebuild the church into a stately building, the century-old linden trees would become our park, we would clean the pond, install sculptures, break up flower beds, plant flowers, erect fences and get a beautiful elegant patrimony of the elder Azarov .. The artists Mikhail Bogdanov and Gennady Myasnikov handled it admirably.

True, I had to work from dawn to dusk, but the viewer, looking at the picture, would never guess such changes.

PHRASES GONE TO THE PEOPLE

“I don’t like actors, firstly, and secondly … I forgot, pour it!”

“I saw the bottom of many, many bottles.”

“I really couldn’t pull back when she was almost ripped out of her dress!”

Share
Facebook
Twitter
Pinterest
WhatsApp
Previous article
Nutritionist Kruglova: Tangerines should not be eaten for problems with the gastrointestinal tract, allergies and children under one year – Rossiyskaya Gazeta
Next article
A centenary of families from La Palma once again spend Christmas away from home