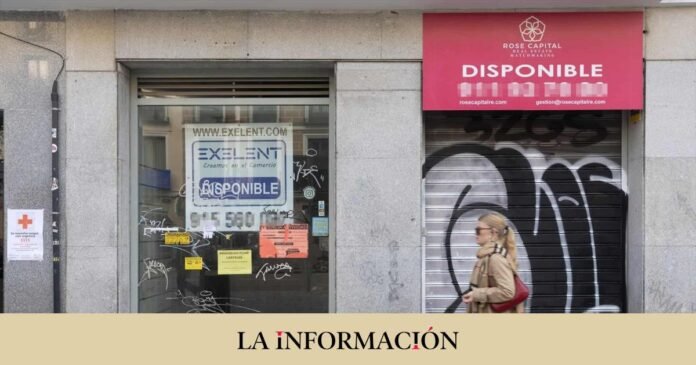 The storm caused by inflation, the war in Ukraine and the ongoing increase in financing costs has swept away a good number of small businesses and hospitality businesses in the last year. The Social Security affiliation data published this week confirms that these are the two sectors where the most self-employed have been forced to close their businesses, in a year in which the tailwinds of recovery after the covid gave activity came to a sudden stop in the second half of the year, coinciding with the warnings from international organizations about the impending crisis and with the turn of the helm of the European Central Bank (ECB) in its interest rate policy.

In a single year, a total of 19,699 businesses and 3,367 hospitality businesses have been lost in Spain, according to the figures handled by the Union of Professionals and Self-Employed Workers (UPTA), and which paint a panorama of business closures that are usually Frequent to all autonomous communities. Both activities, which are a gateway to self-employment, show a “disproportionate” level of registrations and withdrawals from the system, warns Eduardo Abad, the organization’s general secretary. Proportionately, “there is more labor turnover in these sectors than among employed workers,” he laments.

This problem is especially serious in the case of commerce, where the destruction of companies affects especially the smallest cities. They are merchants and hoteliers who have not been able to pass on the sharp increase in costs that they have been suffering. Both the disproportionate increase in energy prices frequently caused by the Russian invasion of Ukraine, and the sharp rise in products at source. Small entrepreneurs who have less room for maneuver and for whom the increase in the cost of credit lines that they have to renew periodically probably puts them out of business. Even more so when many of them hold family businesses.

According to the calculations of the employers’ association Cepyme, small and medium-sized companies have had to support an increase in their costs of 20% on average over the last year. In the organization headed by Gerardo Cuerva, considering that the coming months will be highly conditioned by the difficulties that the company is going through in the midst of a context of enormous international uncertainty. A context in which inflation (which moderated to 5.8% in December, according to the National Institute of Statistics) will continue to be high and in which the underlying resistance to lowering (leads the general rate and is already at 6.9%) consumption could last in the first semester.

Remember, also, that this year the charges will increase further, either through new taxes, the increase in social contributions (they have increased the contribution bases for more than 5 consecutive years) and now, in addition to the interest rates for part of the ECB. Meanwhile, the self-employed associations warn that the bad affiliation data that the sector has registered in 2022 are only the prelude to what can happen in the coming months with the labor market in general.

If the data for average affiliates are taken, the number of self-employed workers remains stable in relation to the previous year, with only five more self-employed workers in December than in the same month a year ago… five. If what is considered are the data at the end of December, RETA contributors have fallen by 1,204, which represents their first negative record in the last decade -the last time was in 2012, the year in which the The Spanish economy fell by 3% in the middle of the debt crisis and with the banks recently rescued. The total number of self-employed stood at 3,324,048 at the end of last year.