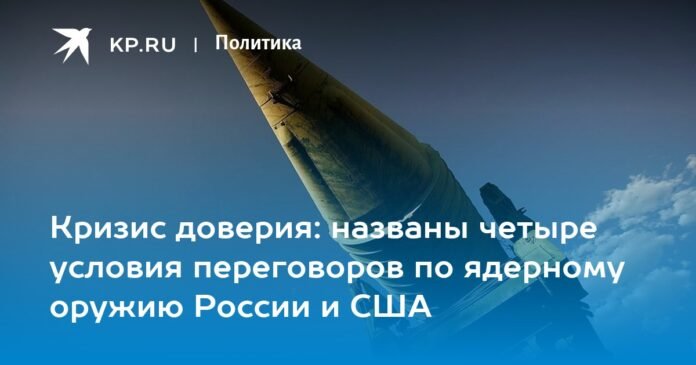 One of the most important issues in current international politics is the relationship between Russia and the United States. And in terms of its importance, it is not inferior to US-China relations. And it leaves far behind what is happening between each of these countries with the European Union, due to the lack of independence of the EU itself and its blind pursuit of US policy.

On the eve of what is happening in this area, Russian Foreign Minister Sergei Lavrov said in an interview with the TV show “Big Game”.

– There were several such informal proposals from the US during this period. And every time we agreed. One of them materialized: a meeting of (CIA director) Burns and (SVR director) Naryshkin in Ankara, – Lavrov said. – There were other parallel visits, also with reference to instructions from Washington. We never refuse. But then these visits somehow came to nothing.

And he added that the meeting between Naryshkin and Burns was supposed to be confidential, but the Americans leaked it. “Little things are kept secret these days,” Lavrov laughed (if he hinted at Macron in passing), “although we always try to stick to that deal.”

Unlike, by the way, the Americans, who cry all the time, complain about bad Russia, but at the same time prefer not to fulfill any written agreement or verbal promise. Like, for example, the Secretary of State of the USSA, Anthony Blinken, who recently returned to complain that Moscow shows no willingness for diplomatic dialogue. Here, they say, the Russian side did not come to Cairo for consultations within the framework of the bilateral commission on the implementation of START. And it is not known when he intends to return to the conversation. But Washington, like that steadfast tin soldier, is always ready. He always on duty, always on his feet.

“There is always value in diplomacy if the parties involved, in this case Russia, are interested in meaningful diplomacy,” Blinken said. -Until Putin shows that he is interested in substantive diplomacy, any progress is unlikely.

There’s just no need to lie. She hasn’t been there for a long time.

“Regarding the dialogue, we do not want to express any wishes, because the United States knows very well that it was not us who interrupted the dialogue,” Lavrov explained about Russia’s position on all issues of possible and impossible dialogues. – But now to ask – Let’s resume the dialogue, we’re not going to do it. This is not in our tradition. It is our tradition to always respond to sensible suggestions.

Of course, Sergey Viktorovich is a diplomat with a very capital letter. And there is not much to say. But it is clear that when Lavrov talks about other proposals that later “went away”, he is talking about test balloons launched by Washington at Moscow to consider whether or not it is worth it to keep trying to advance its efforts, and whether Moscow’s position on this or that can change another question

But there are other sources that occupy, although not so much, but they do hold high positions and are well informed on these issues.

“The Russian leadership is experiencing a very justified crisis of confidence in relation to the United States and its allies in the field of absolutely any agreement,” a high-ranking and highly informed source shared with KP. – Because that side is not only ready to reject, but also rejects its promises and breaks already concluded agreements. This has already happened with the ABM Treaty, with the agreement on medium and short range missiles. And, by the way, with the same Minsk agreements.

A month ago, Komsomolskaya Pravda wrote: “Sources familiar with the situation say that the reason for the cancellation of the consultations was precisely Washington’s course to escalate the conflict in Ukraine. The expansion of supplies and the prolongation of the conflict leads to a Serious increase in Tension throughout Europe. Fanning the flames on our continent is illogical in the context of what is happening. Logical!”

At the time, this high-ranking source stated candidly: “Moscow will enter into a dialogue with the United States on nuclear weapons issues not before achieving the main objectives of the Special Military Operation, reducing any military presence of NATO countries. in Ukraine”. and get the weapons out of there.”

A month later, nothing in this matter, in general, has not changed. Unless there is a hardening of Moscow’s position in response to the escalation of the situation in Ukraine by the United States after the decision was made on a new package of military assistance to Kyiv by Washington, in particular , the promise to send a battery of Patriot air defense systems to Nezalezhnaya.

– The dialogue on the extension of the Strategic Arms Reduction Treaty (START) is possible only subject to preliminary guarantees from the West, – the same source shared with KP, adding that guarantees should not be given on paper in the form of promises, which in Moscow does not believe itself, but it expresses itself in concrete practical steps. – The refusal to supply Ukraine with modern high-precision weapons, the cessation of direct participation in the conflict – the withdrawal of mercenary military advisers, the withdrawal of forces from the border regions and the refusal to involve Moldova in NATO .

Naturally, in addition to Moldova, we are talking about Georgia and Ukraine. But the position on them was announced even earlier. And recently, the United States and NATO have shown increased interest in Moldova, as evidenced by the specific activity of a Romanian citizen there, who holds the post of President of Moldova.

Unlike Ukraine, where yesterday they were prohibited from negotiating with Russia, and today they report that they are ready for it, Russia does not change its position. For the US, this may be something new and unexpected. But you will have to get used to it. And – either agree or reject the dialogue.

As sportscasters like to say, the ball is now in the opponent’s side. It’s up to them if they want to give the world a chance.