HomeLatest NewsCriteria and the State strengthen their shareholding control in Caixabank to 49.6%
Latest News

Criteria and the State strengthen their shareholding control in Caixabank to 49.6% 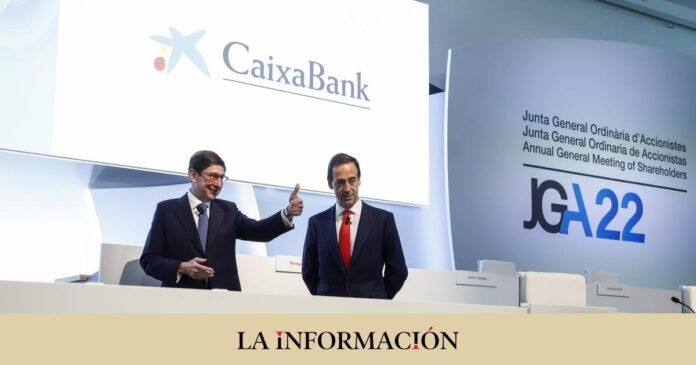 Caixabank is preparing to carry out its great operation in 2022 before the end of the year chimes. The financial institution run by José Ignacio Goirigolzarri and Gonzalo Gortázar is registering a capital reduction equivalent to 6.92% of its capital in the Iberclear and Mercantil securities register, which will mean the redemption of 558.5 million shares.

The cost of eliminating these titles exceeds 2,040 million euros at current stock market prices and will cause a shareholding reorganization that will give more power to the current owners of the bank. Specifically, the hard core formed by Criteria Caixa and the Government, through the FROB, will increase their shareholding weight by almost 3.5 percentage points, from 46.1% to 49.6% of the capital, according to data estimated by ‘ The Information’.

This is an automatic adjustment derived from the capital reduction and amortization. The number of shares into which the property of Caixabank is divided will drop from 8,060 to 7,502 million as of this week, which is why with the same number of titles the current shareholders have a greater proportional and percentage weight in the bank.

In the case of Criteria, the holding company of the La Caixa Banking Foundation, its 2,419 million titles go from representing 30.01% of the capital to 32.2%, while for the semi-state FROB, which has 1,299 million titles, their percentage will rise from 16.1% to 17.3% of the capital. This is a movement that this newspaper already advanced in June 2022.

The bank’s third largest partner is the US manager Blackrock, which will increase its weight from the 3.2% declared to the supervisor to 3.46%. For its part, Capital Group will raise its percentage this week from 3.11% to 3.34%, while the Norwegian sovereign wealth fund, the fifth most prominent shareholder, will have 2.5%, two tenths more than before.

The increase in captive capital (in the hands of stable shareholders) to more than half of Caixabank occurs a few days after the advisory committee of the Ibex 35 index has surprisingly raised the contribution of ‘free float’ (free shares on the stock market) for the bank from 80% to 100%.

In this way, the unofficial body of BME is transferring an order to the index funds to increase their weight in the bank, which is currently the fifth value with the most weight with 6.7%, only surpassed by Iberdrola, Inditex, Santander and BBVA. The Ibex 35 is banked even more this Tuesday with the incorporation of Unicaja to the selective.

Duel with Sabadell for leading the Ibex 35

In addition to the immediate effect on the distribution of shares, the decrease in the number of them causes an increase in the potential distribution of profits of each of them and in a basic valuation ratio that analysts use when valuing companies on the stock market: Earnings per Share (EPS). This indicator also rises effectively after the amortization of securities in the same proportion to the size of the corporate operation.

During the next four sessions, Caixabank is also at stake for an honorary stock market title among investor relations departments in Spain: being the best stock on the Ibex 35 in the annual course. The bank is measured with Sabadell for this crown with a technical tie to date between the two with an accumulated increase of around 60% on the stock market since January. Repsol (+49%) and Bankinter (+47%) are third and fourth in this annual list.

More time to sell for the State

The good moment of Caixabank on the stock market paves the way for the future departure of the State’s shareholders, which has been present in the bank since the merger with Bankia in March 2021. The Government will approve this Tuesday in the Council of Ministers an extension of up to two additional years in the divestment period of its stake, it announced on Friday. With this agreement, the deadline is extended until December 2025. It is the fourth extension of the term after those approved in 2016, 2018 and 2021.

In this way, the state has managed to multiply by more than two the value of its bank shares since the merger with Caixabank. Its 61.8% stake in Bankia was worth just over 1,950 million euros the day before the announcement of the merger with Caixabank. That percentage became 16.1% of the new bank and now rises to 17.3% this week. According to its price at the close of last Friday, that package is valued at 4,754 million euros, 143% more than in March 2021.

The impossible mission of recovering the 24,000 million euros in public aid that was injected into the BFA and Bankia in 2012 is still too far away, but it would only be a matter of time if the potential for a rise in the stock market and the collection of dividends are taken into account. . Counting on the last payment made in April 2022 (190 million) and that of 2021 (34 million), the public arcades have rescued almost 1,400 million this way since 2015.

To this figure we must add the income from the two large sales of shares made by the State in Bankia. In February 2014, the State gained 7.5% of the capital for 1,304 million; and another 7% for 840 million euros, a third of all the public money that the rescue represented a decade ago.

Share
Facebook
Twitter
Pinterest
WhatsApp
Previous article
For the first time in history, the importance of relations with Russia came to the fore in China.
Next article
“I want to prick my neck”: Lera Kudryavtseva quarreled with Sergei Sosedov on the “Superstar!” – Russian newspaper