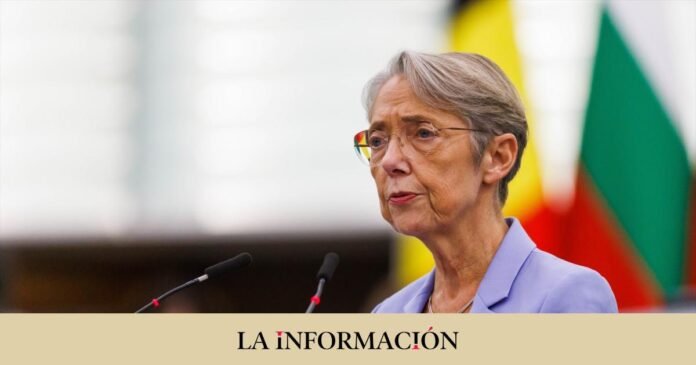 French Prime Minister Elisabeth Borne has backtracked on the halo government’s plans to raise the minimum retirement age. In her initial strategy, the French executive wanted to set the minimum retirement age at 65. Borne, who is starting a last round of two-day talks with unions and employers before presenting his reform in detail on the 10th, acknowledged in an interview with the radio station France Info -and collects Efe- that 65 years ” is not a totem “and that” the discussions fit and will continue.

He added that, in addition to raising the minimum pension age from the current 62 years, there are other parameters that are on the negotiating table whose modifications could help balance the financing of the pension system on the horizon of 2030. French executive is going to retire a controversial device to reduce the period for collecting unemployment benefits in the event that the unemployment rate fell below 6%, and which had provoked the outright rejection of all the unions. “Understanding that perhaps this point has not been the subject of enough discussion, so that we are going to withdraw it”, it is not possible.

The Executive of President Emmanuel Macron has published a decree to modify the conditions for the collection of unemployment benefits that will come into force on February 1 and is inspired by Canada. The principle is that unemployment compensation rules should be stricter when there are many unfilled jobs and more protective when unemployment is high.

Specifically, since the unemployment rate is now 7.3%, below the 9% threshold that has been set as a reference, the period in which the unemployed can receive the unemployment benefit will be reduced by 25%, with a minimum of six months. This means that those who are now entitled to 18 months of compensation will only receive it for 12 months.

But in addition, another more controversial device that came out of the decree, and that is now going to be eliminated, contemplated that the compensation period would be reduced by 40% if the unemployment rate fell below 6%. Borne said “our intent is transparent” for future rules.

The red lines that will not be crossed with this reform

The prime minister ruled out an increase in contributions, both employers and those paid by workers, and said that this is “a red line.” Her argument is that not increasing labor costs is what helped create a million jobs during Macron’s first term (2017-2022) and continue in the same dynamic in the second. “We don’t want to increase contributions, we don’t want to increase the cost of labor,” she stressed. On the justification of the reform, Borne referred to the reports and projections of the Pension Orientation Council (COR, an independent public body), which are subject to divergent interpretations by the Government of it and the unions.

“Our pension system has a structural deficit”

According to the prime minister, the COR figures “show that our pension system has a structural deficit and will continue to have it” and “we want to preserve the pay-as-you-go system” in which contributors at all times are the ones who pay the retiree pensions. She emphasized that the ratio between contributors and retirees is falling: it has gone from 2 contributors for every retiree in 2005 to 1.7 currently and will decrease to 1.5 in the future. For this reason, she insisted that “if we do not want to leave a debt for future generations (…) we have to work longer.”

A reform still at the mercy of parliament’s decision

The pension reform that the government of President Emmanuel Macron will conclude on Tuesday of next week will be adopted by the Council of Ministers on January 23 so that it can begin its parliamentary process at the beginning of February, with the aim that both chambers adopted during the first quarter, according to the Prime Minister’s schedule.

The problem is that his Executive requested the support of other political groups, since Macron does not have a sufficient majority, and the left-wing opposition and the far-right of Marine Le Pen are in direct opposition. In principle, the only partners seem to be the group of conservatives: ‘The Republicans’. But the greatest difficulties could be in the street, since all the unions without exception have demonstrated frontally against the delay of the retirement age and have promised mobilizations that will be announced in the coming days.