HomeLatest News"Crystal Turandot" 2022: who received awards and why
Latest News

“Crystal Turandot” 2022: who received awards and why 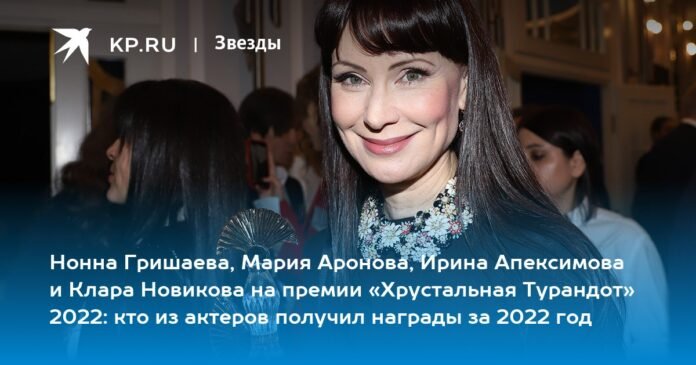 The 2022 Crystal Turandot Theater Award was awarded in Moscow. The 31st award ceremony was held at the Galina Vishnevskaya Opera Center. This year we decided to abandon the usual practice of awarding the achievements of the last theatrical season in several categories. In 2022, they left one nomination – the main one – “For honor, dignity and service to the viewer.”

The person in charge and founder of the award, director Boris Belenky, says that this is an atypical year, and that is why the ceremony is special: “And the most important thing here is not the skill of directors, set designers, etc. The most important thing is to reward people for their honor and dignity. Because today honor and dignity is what illuminates the public, the people…”

The prize of the Executive Committee of the CIS “For honor, dignity and service to the viewer” was awarded to the theater and film actor, People’s Artist of the Republic of Belarus, Vladimir Gostyukhin. 76-year-old Vladimir Vasilyevich is in excellent shape – he works. Gostyukhin was touched and even worried in front of his colleagues: “It is easier to go on stage, on the set, than now here. I’m shaking! I’m going to get another prize. It feels like they’re trying to…”

By tradition, all in black and in a trouser suit, Irina Apeksimova was a little worried: “When colleagues recognize you, this is the most important thing. It is very moving. This is great!” As always, the elegant Nonna Grishaeva was modest: “I always feel awkward, it is much easier for me to give than to receive.”

To congratulate Nonna Grishaeva, her colleagues from the Vakhtangov Theater, People’s Artist of Russia Maria Aronova and her son, actor Vladislav Gandrabura, took the stage. Aronova affirmed that since the year 90 she had not had a better stage partner.

Maria Aronova with her son, actor Vladislav Gandrabura, and the person in charge of the award, Boris Belenkiy. Photo by Ilya ZOLKIN

Distinguished artist Olga Kabo touchingly congratulated and presented the award to People’s Artist of Russia Valery Barinov: “Being a real man, only he can reliably carry such a fragile and incredibly beautiful princess like Turandot in his hands.”

Valery Barinov with his wife. Photo by Ilya ZOLKIN

Who was awarded in the 2022 Crystal Turandot Award

– People’s Artist of the Republic of Belarus Vladimir Gostyukhin

Composer Maxim Dunayevsky with his wife and daughter. Photo by Ilya ZOLKIN

Princess Turandot is the heroine of the fairy tale by Carlo Gozzi and the performance of the same name at the Evgeny Vakhtangov Theater. The laureates receive a glass figure with the image of her, which this year was made by craftsmen from Gus-Khrustalny.