HomeLatest NewsCut off from income and not allowed back. Dmitry Medvedev named...
Latest News

Cut off from income and not allowed back. Dmitry Medvedev named several points on how to punish traitors to Russia 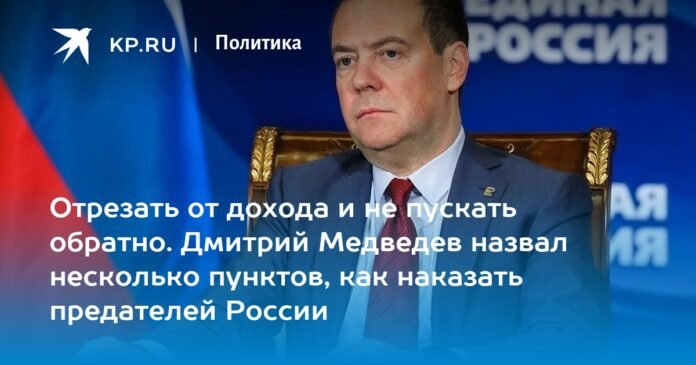 The vice president of the Security Council of the Russian Federation, Dmitry Medvedev, lashed out at citizens who first left Russia and then began to publicly wish the country’s defeat in the Ukrainian conflict. On his Telegram channel, the politician called such people traitors and listed three ways to punish them.

The president of United Russia recalled that such “non-systemic oppositionists” had already once led to the collapse of the Russian Empire, defeat in the First World War and a bloody civil war in which about 17 million Russians died.

According to him, modern traitors behave in a similar way, sending curses to the Russian authorities and “wishes for a speedy defeat” in the conflict, as well as expressing “unpretentious dreams of the destruction of present-day Russia.” There are those who directly want the death of the Russian military, says the vice-president of the Security Council of the Russian Federation.

“Apparently, they consider everyone who is now fighting or at least fighting for the victory over Ukrainian Nazism as people of the lowest degree, incapable of subtle emotions and an adequate perception of life,” Medvedev wrote. “Stupid human material and weeds . In short, they despise us all, of which the absolute majority in our country.

How to punish the traitors of Russia? The first way is to declare yourself enemies of society and the state.

Such actions must not go unpunished, the politician is sure. The President of United Russia believes that, first of all, traitors should be considered enemies of society and the state (hostis publicus and enemies of the state, the American style they love).

“This definition must be firmly attached to them,” Medvedev stressed.

Traitors must not be allowed into Russia until the end of their days and must be deprived of income in the country.

Public censorship is, of course, an effective method, but this is not enough, says the politician. According to him, the traitors should be forbidden to return to Russia until the end of their days.

Criticizing the Russian Federation in every possible way, some of them continue to earn good money in the country, being outside its borders, which is completely unfair, Medvedev writes.

“They must be completely isolated from the sources of income in our country, whatever they may be,” says the text of the publication.

Return to Russia – only through public repentance

Many rules have exceptions, so it is worth considering such a possibility even in the case of traitors, believes the Deputy Chairman of the Security Council of the Russian Federation.

According to him, it is possible to foresee the possibility of returning to the country if a person publicly and unequivocally repents for his deeds and, in appropriate cases, receives an “amnesty or pardon”. Still, it is better that they do not return, Medvedev concluded.

By the way, the Chairman of the State Duma of the Russian Federation, Vyacheslav Volodin, also said that the Russians who left the country after the start of a special military operation in Ukraine and the announcement of partial mobilization are traitors. He believes that such citizens have actually left their homeland.

Recall, Andrei Isaev, deputy head of the United Russia Duma faction, told reporters that the State Duma is developing a bill that provides that Russians who have left the country will also be deprived of the opportunity to work in the form of self-employed workers. as tax increases for individual entrepreneurs outside the Russian Federation.

As the KP.RU website previously wrote, Maksut Shadayev, head of Russia’s Ministry of Digital Development, told State Duma deputies that about 100,000 IT specialists will leave Russia in 2022. According to him, about 80% of “IT people” who left the country continue to work for companies of the Russian Federation, being in the territory of friendly countries.