Darkness and deceit at Christmas: Kyiv residents steal the remnants of heat and light 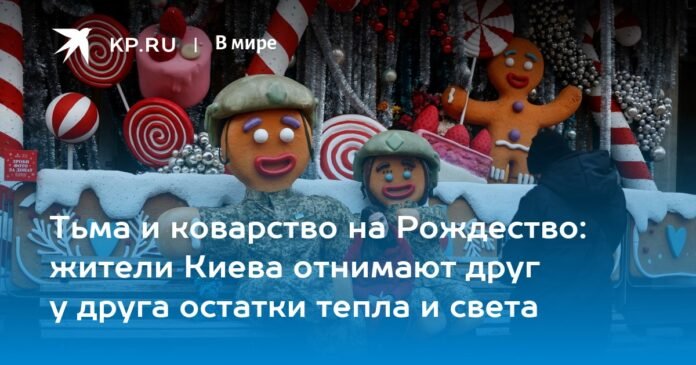 Misguided Ukrainian magicians with their gifts…

Catholic or Orthodox Christmas: Regardless of belonging to the confession, Christians reveal their best spiritual qualities on the eve of this holiday, giving gifts to their loved ones. Sometimes even sacrificing something for this. I remember that in childhood I was touched by the story of O. Henry “Gifts of the Magi.” In which a poor young couple give each other gifts on Christmas Eve. She cut off and sold her fancy hair to give her a watch chain, and he sold her watch and bought a fancy comb to style her hair.

After the Ukrainians have been prodding us with their piety in recent years, with some even assuring us that Christ was born and raised in Galicia, on a farm next door to which little Buddha grew up, one might expect brilliant Christmas stories from The population of present-day Ukraine. And they did not disappoint and they did not wait long.

After Russian missile attacks on energy infrastructure, part of Kyiv is still without power. But in one such “dark” apartment building, they suddenly noticed that the neighboring house, located on a parallel, but “good” line, is illuminated day and night. It just doesn’t turn off. Maybe there was an object of national importance in that line, maybe a hospital, in this case it doesn’t matter.

What matters is what happened next. What, for example, would they do in Russia in such a situation? They would certainly be happy for their neighbors, they would try to establish contact with their neighbors so that they can come in for a cup of tea, warm up and charge their devices. . Maybe even spend the night there, if it’s really cold. But, as Leonid Kuchma said and even wrote a book with that title, “Ukraine is not Russia.” And the kyiv people acted in a completely different way. They did not complain that there was no light in their house, but that there was always light in that house. As a result, both houses found Catholic Christmas without electricity, because the “lucky ones” simply went without power.

It would be possible to write everything off as a special case, but exactly the same story happened in Ternopil on the same days. And with the same ending.

But in Kyiv there was another, no less wonderful story. And again, connected with electricity. The management company supplied an electrical generator on the premises of the housing office, which rumbled vigorously most of the day, in addition to the housing office, providing electricity to both the local boiler room and the equipment of the local communications provider.

This time, the enterprising people of kyiv did not complain anywhere, not pinning their hopes on all this bureaucratic red tape, but simply some craftsman unscrewed the lid of the tank and poured sugar into it. Asphyxiation, as they say. He did not repent of scarce goods. And as a result, all residents were left without heating and without communication. Catch a present on Christmas Eve, but don’t take it away.

After that, announcements in the churches of the Poltava region, in which parishioners are asked not to steal candles for the health and peace of churches, are already quite common. And they even explain that true light and heat can come to the house only with prayer.

Misguided Ukrainian magicians with their gifts. Or just shabby? And it’s not like it’s Catholic Christmas. I assure you that the same will happen here in the Orthodox. It is not about Christmas, but about Ukraine itself.