Dasha fled, leaving Venik with four children: the first pictures from the shooting of the new “Daddy’s Daughters” 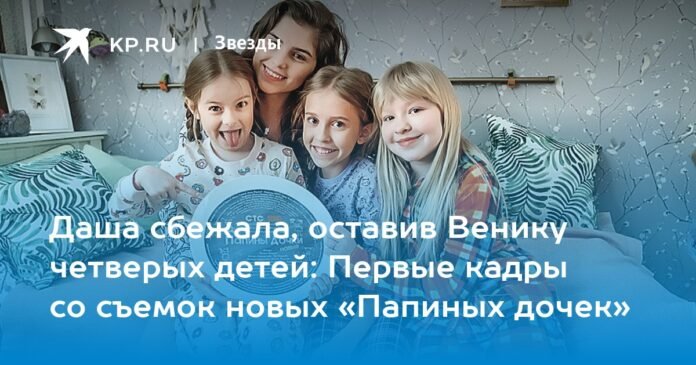 These girls will now be the protagonists (from left to right: Polina Ainutdinova, Polina Denisova, Vita Kornienko and Eva Smirnova). Photo: STS

TV channel STS has begun the revival of its flagship project “Daddy’s Daughters,” a heartwarming family series about a father raising five daughters while continuing to work. 10 years have passed since the completion of the twentieth (!) Season of the project. A lot has changed during this time, including in the lives of the main characters of the project. And yet, almost everyone went back to work. KP introduces new set images and explains what will happen to the characters now.

The father of the Vasnetsov family (Andrey Leonov) will leave the foreground. After all, the girls grew up and live independently. Now the plot will focus on the new dad.

Here he is, a new single dad! Benjamin, nicknamed Venik (Philip Pale), married Dasha Vasnetsova (Anastasia Sivaeva), not knowing that in the new episodes of the project the scriptwriters would put the entire plot on him. After all, the mother of her children suddenly left home and left her four daughters in charge: Lisa (Vita Kornienko), Diana (Eva Smirnova), Arina (Polina Ainutdinova) and Sonya (Polina Denisova). Almost the same as his mother did in her time.

A bunch of old heroes in place. A friend of the Vasnetsov family, the oligarch Vasily Fedotov, is still played by Alexander Oleshko. The wife of Sergey Alekseevich – Nonna Grishaeva. The good grandmother of the Vasnetsovs Antonina Semenovna, Olga Volkova, carefully kept the costumes of the heroine from her all these years, which she gladly brought to the set.

The performer of the role of Masha will also appear in the series – Miroslava Karpovich, who recently managed to become famous except for rumors about an affair with Pavel Priluchny. But the rest of the “daddy’s daughters” should not be expected: Daria Melnikova (in the TV series Zhenya), the ex-wife of Arthur Smolyaninov, admitted that the STS project has become “slavery” for her, so That does not go. to return, and Ekaterina Starshova (Pugovka) doesn’t move to live in England long before filming begins.

Despite the actress’s announcement on social networks about a break in her theater career for health reasons, the actress is doing well with “Las hijas de papá”. Yes, and in life too: the star of the series managed to become a mother, having given birth to her husband, figure skater and choreographer Ilya Averbukh, the son of Leo. In the project, she will continue to play the nerd Galina Sergeevna, who seeks to teach everyone to live correctly and accurately.

This year a new series of the project “Daddy’s Daughters” will premiere on STS, for the production of which the START platform is responsible

Share
Facebook
Twitter
Pinterest
WhatsApp
Previous article
Khodakovsky: under Ugledar managed to dislodge the enemy from the first line of defense KXan 36 Daily News
Next article
Mortgages seal the best November since 2010 despite having put the brake on