HomeLatest NewsDazn agrees to leave the Orange and Telefónica apps in January after...
Latest News 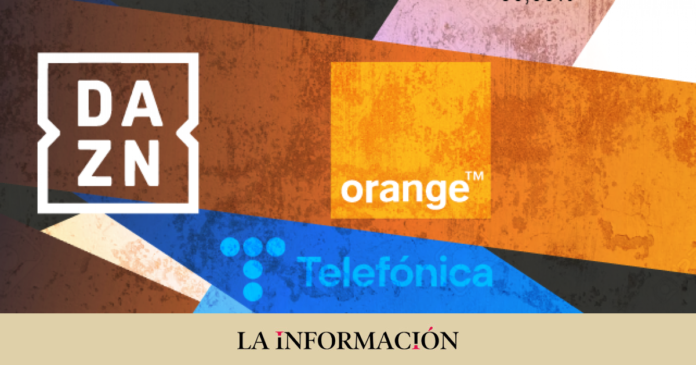 Six months later, Dazn returns to ‘independence’ from the mobile applications of Telefónica (Movistar +) and Orange for soccer. The streaming giant has agreed with both telecommunications operators to disconnect from their signal after months of behind-the-scenes work to secure their platform and avoid the problems of failed drops in the first two days of La Liga. In principle, economic claims will not be required, although everything will arise if on this occasion there are new technical incidents.

The trade agreement between the two parties implied a ‘tug of war’ not only relevant economically, but also technically. The operators wanted to control the signal not only through their TV decoder, but also through mobile applications (tablets and phones). The latter was not possible. The clients of both companies who had contracted all the LaLiga matches -Telefónica only had 55% of the matches, while Dazn bought the rights to the rest- would have to create an account on the platform. This ended up ‘exploding’ on August 13, with one of the matches on that opening day: FC Barcelona-Rayo. Problems accumulated on their servers. The process of creating accounts and identifying users and passwords failed and led to service drops and numerous complaints.

This led to an emergency measure proposed by the operators and which, in principle, was intended for those first days. Given the numerous complaints from their own customers, Telefónica and Orange assumed that signal in mobility within their applications, while in Dazn they worked to have a point on their platform. There was no specific deadline to return the signal to the British platform. Doubts began to arise as to whether the systems would hold or not. From the telcos it was demanded at least that it be after the World Cup in Qatar and thus give margin.

Now, six months after that convulsive start and with multiple internal tests and conversations with the operators, there is already a definitive date for Dazn to re-broadcast independently in mobile applications -which in some cases represent up to 20% of the reproductions of the pay television of the operators. It will be on January 16, when Telefónica and Orange customers are required to have their own account on the platform and connect through it. It will be after matchday 17 of LaLiga. They are already being informed to execute the change. Therefore, the first litmus test will be at number 18, where an Athletic-Real Madrid or an FC Barcelona-Getafe will be held.

At the time, Orange warned of the economic consequences. Diego Martínez, vice president of the Consumer division of Orange Spain, warned in October: “The fact that customers are accessing through our network or our platform or our CDNs ultimately represents an additional cost for us.” The possibility of demanding some kind of compensation from the two operators was considered. According to market sources, these claims will not be raised, although the two telcos will be attentive in case new incidents occur.

This is the relevant premiere of Dazn in Spain after years in which it has been offering more niche content such as MotoGP or Formula 1. The company, which burst onto the scene in the last auction of LaLiga rights as a ‘white knight’ ‘ of the club employers, committed 2,300 million euros over five years to offer 45% of the matches. The first season -which is the current one- will be the most complicated to make the 460 million profitable. He received 280 million from Telefónica to ‘resell’ his matches and around 100 million from Orange. Therefore, it had close to one hundred million to compensate both in its direct offer to the consumer (with a starting price of 18 euros) and with minor commercial agreements such as those signed with Yoigo and other telcos.

Its figures are unknown, since until now it is not obliged to make its figures public – it will be when this point of the audiovisual law comes into force. His bet is based on increasing the user base progressively to bring profitability closer in the coming years. That is why one of the demands of this type of operators was to increase the validity period of these rights to five years. The contract that was built with La Liga was for this period. But Telefónica is still pending authorization from the National Commission for Markets and Competition (CNMC), as it continues to be a dominant operator in pay television under the current regulations.

The commercial battle that arose between Telefónica and Orange to get the largest number of soccer customers intensified in the summer, with 25% discounts for six months and other offers. But far from the levels of past seasons. Already in November it will obtain a reduction in its promotional intensity after the celebration of El Clásico. The French company closed the third quarter with a 13% increase in its pay TV user base, while Telefónica cut it by 5.4% despite recovering customers with the “king sport” who left in June after the end of the season.

Share
Facebook
Twitter
Pinterest
WhatsApp
Previous article
In Canada, the town completely crystallized in ice from houses to cars after a severe winter storm KXan 36 Daily News
Next article
Goods in Russia have risen in price by 12% since the beginning of the year – Rossiyskaya Gazeta