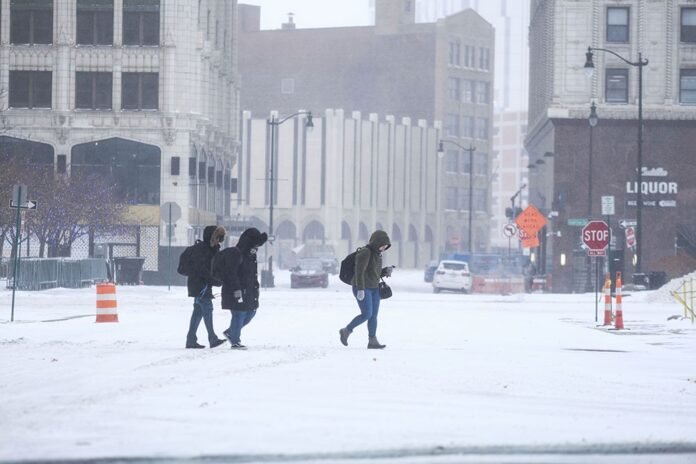 A rare winter storm in history has killed at least 41 people in the United States and the death toll is expected to rise as people are trapped inside and tens of thousands of homes and businesses lose power. across the country, notes NBC News. Deaths have been reported in 12 states: Colorado, Illinois, Kansas, Kentucky, Michigan, Missouri, Nebraska, New York, Ohio, Oklahoma, Tennessee, and Wisconsin. 10 people died in Ohio, including a utility worker electrocuted, six motorists were killed in crashes in Missouri, Kansas and Kentucky.

Elliot traveled from Mexico to Canada

The storm, nicknamed “Elliot” by forecasters, has caused thousands of flights to be canceled or delayed. According to the FlightAware tracking website, 1,707 domestic and international flights were canceled around 2 p.m. ET on Sunday.

The scale of the storm extended from Canada to the Rio Grande along the border with Mexico. About 60 percent of the US population has experienced dangerous winter weather watches or warnings, according to the National Weather Service (NWS), with temperatures plummeting below normal from east of the Rocky Mountains. to the Appalachians. “In some areas, being outdoors can lead to frostbite within minutes,” the NWS bulletin says. The service advised anyone traveling or going out to “prepare for the bitter cold by dressing warmly, covering as much exposed skin as possible, and packing winter safety gear in their vehicles.”

The Americans died after coming down with a severe, life-threatening cold. Winter storms ripped through various parts of the country on Friday, leaving a trail of devastation just hours before Christmas. Authorities continued to deal with massive damage over the weekend. In the United States, one of the hardest-hit areas was the city of Buffalo, where two days of heavy snowfall and strong winds created conditions that local authorities say were likely the harshest since 1977. In the city, the height of the Snow cover in some areas has reached 180 centimeters. “This storm will go down in history as the most destructive in Buffalo’s long and rich history, which has endured many major hurricanes,” New York Governor Kathy Hochul said Sunday. At least 12 people have died in Erie County, where Buffalo is located, according to the Associated Press. The city streets were empty, heavy snowplows stuck in the streets. In Niagara County, north of Erie, another man died from carbon monoxide after snow clogged his stove, the AP reported.

Bodies found in cars and snowdrifts

During a storm briefing Sunday morning, Erie County Executive Mark Polonkartz confirmed some bodies were found overnight in cars and snowdrifts, according to local news station WIVB-TV. “I know that some bodies were found in cars, and some were found on the street in snowdrifts. I express my deepest condolences to the families, some of them probably have not yet been notified of the tragedy,” said Polonkarts, who confirmed that as of Sunday morning, seven people were killed. Peter Anderson, an Erie County spokesman, told Newsweek Sunday that some people have died after heart attacks caused by shoveling snow and “there may be others not yet discovered.”

At the Canadian border on an icy road in British Columbia on Christmas Eve, a bus overturned, killing four people and injuring three dozen. The Royal Canadian Mounted Police said Sunday the bus crashed on Highway 97C east of Merritt. The regional health department specified that 36 people suffered injuries of varying severity. As of Sunday morning, eight people remained in the hospital, including two in serious condition and two with non-life-threatening injuries.

In recent days, the winter storm has also hit Ontario and Quebec, causing flight cancellations and school closures, as well as cutting power to hundreds of thousands of customers. National Grid, which serves customers in New York and Massachusetts, asked customers in Brooklyn, Queens, Staten Island and Long Island on Saturday to reduce their natural gas use through Sunday afternoon. Power was being restored across the country, but as of Sunday afternoon, more than 140,000 customers nationwide were without power, including nearly 70,000 users in Maine, according to the Poweroutage.us website.

The US National Weather Service called the current blizzard a “once-in-a-generation” weather event, saying it could set or break more than 100 daily low-temperature records in the United States.

The worst effects of Elliott are forecast to abate in parts of the country on Monday. The weather service said “weather conditions will slowly improve as the hurricane weakens.” However, cold winds “will continue to penetrate two-thirds of the eastern part of the country.”

The storm, analysts say, will once again draw attention to the issue of climate change, which likely exacerbated the conditions that caused the “bomb cyclone.” The US Environmental Protection Fund said on its website that “more snowfall during blizzards is an expected effect of climate change.”

Share
Facebook
Twitter
Pinterest
WhatsApp
Previous article
More expensive credit, new conditions… the company views the rate hike with suspicion
Next article
Unicaja will debut on the Ibex with the greatest potential of the bank after Santander