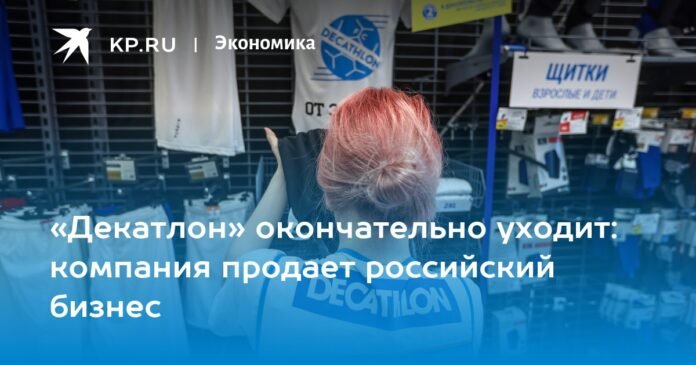 All Russian Decathlon stores have been “temporarily” closed since June 27. Photo: Stanislav Krasilnikov/TASS

The French sporting goods network Decathlon is finally leaving Russia. And he’s looking for buyers for what he owns. While this is known from unofficial sources. Which is not surprising: as the experience of other “outsiders” shows, the process of finding buyers can be long. On the website of the trade network, there is still a message that all stores and the online store are “temporarily closed”, “the site and the application work in catalog mode: products can be viewed, but cannot be to buy”.

To be honest, it’s a shame. Personally, I loved Decathlon very much because all the clothes I bought there fit my figure perfectly and emphasized his dignity a lot. (Did you think that women buy sportswear only after that, so that it is convenient to do sports?) For some reason, with sportswear of Russian brands, not to mention Chinese ones, such an effect is not observed.

All Russian Decathlon stores have been “temporarily” closed since June 27, after a sale, as was the case with Ikea. The official Telegram channel, however, remained even before September 1 – they gave advice on sports. And the products can still be bought in the markets; for example, there is a whole section on Ozon (more than 5,000 supposedly original Decathlon products). And with good discounts, which reach 50%. Although these are rather the remnants of the old luxury, mainly summer things are for sale, winter season things are mostly swept away.

Analysts estimate the rest of the French company’s business in Russia at 13-15 billion rubles. True, not everything is simple here. Decathlon carried out its main business activity through a subsidiary established in Russia: Oktoblu LLC. The real estate sector, that is, the commercial buildings themselves, including the purchase of land for them, construction and management, is carried out by Blue House LLC, where the Belgian company is listed as the founder. For 2021, both Russian Decathlon partner companies showed a good profit increase. But now the main buildings – around 20 hypermarkets in 13 Russian cities – are in fact idle.

How and what will be sold is still unknown for obvious reasons. But there is an important point. Now transactions for the sale of businesses owned by companies from hostile countries require permission from the Ministry of Finance. One of the conditions to obtain it is a discount of at least half of the appraised value.