HomeLatest NewsDeclassified documents confirm the connection of the assassin of President Kennedy with...
Latest News 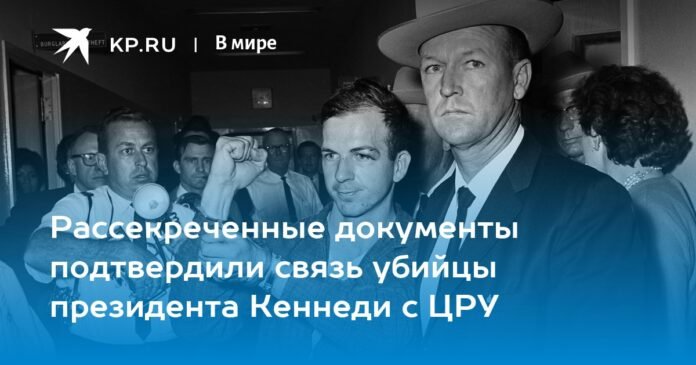 Oswald’s role, like that of the CIA, in the assassination of President Kennedy remains one of the great unsolved mysteries of American history.

A new batch of expired CIA documents released by the CIA confirmed the agency’s ties to Lee Harvey Oswald, an American believed to be the assassin of President John F. Kennedy.

Oswald’s work for the CIA has been discussed before. So this was written directly into the biography of former US intelligence director Allen Dulles written by David Talbot. Then the author suggested that during his military service at the American Atsugi base, located in Japan, Oswald became one of the Marines on whom American intelligence officers conducted LSD experiments. At the time, the CIA hoped that LSD would help spies and saboteurs thrown into the Soviet Union keep their mouths shut if they failed.

The declassified files now directly indicate that Oswald was hired by the Espionage Service. But the extent and nature of his relationship with the CIA remains classified information and, in accordance with censorship rules, is hidden in published certificates and protocols.

Oswald’s role, like that of the CIA, in the assassination of President Kennedy remains one of the great unsolved mysteries of American history. More than a third of Americans believe that Kennedy was the victim of a conspiracy, one of the main participants in which was the CIA.

The main version of the supporters of this conspiracy is the assassination in response to the removal of Kennedy Allen Dulles from the position of CIA director, signed by him after the failure of the US operation to eliminate Cuban leader Fidel Castro.

Tucker Carlson, a well-known American journalist and host of the Fox News channel, said that he had at his disposal some of the unclassified documents related to the assassination of Kennedy and that confirm the participation of the CIA in the assassination of the president of the country. To analyze the information and comments received, he invited the former CIA director, the former head of the US State Department, Mike Pompeo, to his program, but he declined the invitation.

Carlson, who is a close friend of Pompeo’s, expressed his bewilderment over the matter, noting in particular the fact that Pompeo “rarely turns down a TV interview.”

Former Marine Oswald lived in the USSR for some time. In the US, he was suspected of having ties to the Soviets.

He was arrested 40 minutes after the assassination of Kennedy, which occurred in the city of Dallas (Texas). During the interrogation, he denied his guilt. Two days later, while being transferred to the county jail, he was shot dead. The murder was broadcast live on one of the American television channels.