HomeLatest NewsDiaz questions the ability of the VAT reduction to alleviate the inflationary...
Latest News 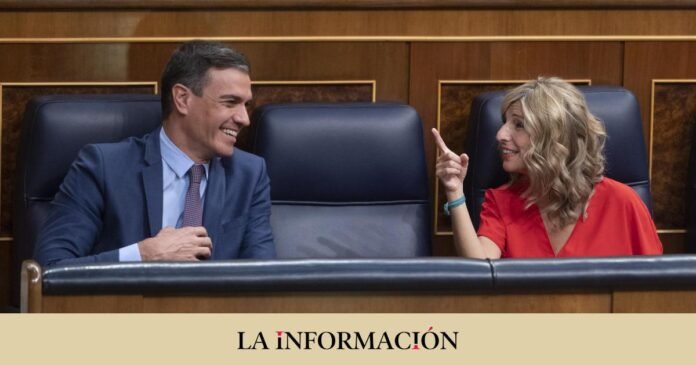 The Second Vice President of the Government and Minister of Labor and Social Economy, Yolanda Díaz, argued this Wednesday that the VAT reduction on basic food items “is not the measure that she believes can work” referring to the United We Can side of Executive Coalition. When asked about the parallelism of the measure with the Popular Party’s proposal, Díaz has defended that the priority for this sector of the Council of Ministers was to control and prohibit the extension of business margins, something that she defends has been guaranteed in the text by submitting it to the control of the National Commission for Markets and Competition (CNMC).

The head of the Labor portfolio has emphasized that the party led by Alberto Núñez Feijóo demanded a general lowering of this tax and has argued that it is something very different from what was finally approved in the third decree to deal with the crisis generated by the Ukrainian war. The Government has opted to eliminate VAT from a small list of food products, which until now had a tax rate of 4% and limit the profit margin of large distributors in order to prevent this reduction from not being translated into the affordable price for consumers.

However, it has not been in agreement with the formula approved in the royal decree. This has been the product of an intense negotiation between both government partners that was finalized late at night on the day prior to its approval by the Council of Ministers. As Díaz has highlighted, it was a kind of tug of war in which the socialist sector was forced to accept the freezing of rents for six more months and the purple side gave its approval to opt for the reduction of the tax applied to food basics

“It is a negotiation in which two different spaces are part. I think the same thing as two months ago and three days ago,” Díaz maintained when asked about her change of heart regarding the proposal of the ‘populares’. However, she has not wanted to specify why the Executive has not entered into assessing the expansion of the list of foods that leave out basic products for many homes such as pasta, meat or fish. Something that the Party leader has demanded

Díaz has also highlighted that the role of the CNMC will be key to ensuring that the measure reaches the pockets of the Spanish, since the unequivocal will of the entire Executive was that the large distributors could not expand business margins by taking advantage of this measure, has assured. As reflected in the text of the decree, the regulatory body will implement a system for monitoring the evolution of prices, without prejudice to the fact that it can carry out the actions that correspond to it within the framework of its powers.

In the press conference, called to carry out an evaluation of the effects of the labor reform on the labor market, Díaz highlighted the reduction in temporary employment and the milestone that one in two contracts has become indefinite in the last year. In addition, he has highlighted that a record has been broken with almost 9.5 million women employed and the work that remains to be done in youth matters, where temporary employment has been considerably reduced, but much remains to be done, in accordance with the instructions of Europe, for which reason it will launch a new youth employment plan endowed with 3,500 million euros.

Share
Facebook
Twitter
Pinterest
WhatsApp
Previous article
Vitaliy Korotich: Why do Americans hang out with us? They are worse
Next article
Kion presented a selection of the most popular Russian films of the year