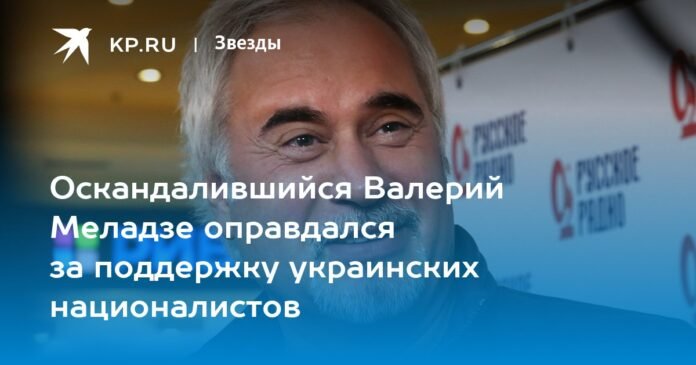 The singer feared the consequences of his sensational antics

The first “cancellation” of the year is gaining momentum: after a corporate party in Dubai, where Valery Meladze, who was drinking with fans, supported the slogan of Ukrainian nationalists, the singer must be recognized as a foreign agent, to be deprived of the title of Honored Artist of Russia and even citizenship of the Russian Federation.

Moreover, not only users of social networks, but also politicians and public bodies advocate the punishment of Meladze. So, with a categorical proposal to deprive the artist of a Russian passport, for example, Senator Elena Afanasyeva made.

The uproar forced the singer, who spoke out against the special operation on February 24 and then went silent for several months, to finally explain himself. In his social networks, Valery Meladze posted a short post, justifying himself for a trick at a corporate party in Dubai.

“People, I want you to listen to me and understand my words,” the disgraced singer wrote. – For 10 months, like many other people, I live with a feeling of heaviness and pain. It just so happened that the towns I love very much are in a conflict where people are dying. I CANNOT NOR WANT TO HATE ANYONE AND I DON’T TRY TO PLEASE ANYONE. I only dream that the antagonism will stop and harmony will be established between the nearby peoples. And for this I am ready to give all my strength.

It seems that the possible consequences seriously frightened the artist, who has been living and earning in Russia for many years. Meanwhile, public figures ask to check whether Meladze legally received a Russian passport, because for many years, since the mid-eighties, the singer herself lived in Ukraine. And her older brother Konstantin from her, for example, still has Ukrainian citizenship, just like his wife Vera Brezhneva – they left for Europe with the start of the special operation.

Meanwhile, Valery Meladze and Albina Dzhanabaeva are still in Russia: in 2021, the couple bought a luxurious mansion in the elite cottage village of Millennium Park in the Moscow region for 600 million rubles. Here, while her husband is traveling to corporate parties, the former VIA Gra soloist is raising common children from her – sons Konstantin, Luka and one and a half-year-old daughter Agatha.

Share
Facebook
Twitter
Pinterest
WhatsApp
Previous article
Ronaldo said that in Europe he won all the trophies KXan 36 Daily News
Next article
The Black Lady is back to grab your attention in this adorable Sailor Moon cosplay.