HomeLatest NewsDmitry Medvedev about the main results of the year. Main -...
Latest News

Dmitry Medvedev about the main results of the year. Main – Rossiyskaya Gazeta 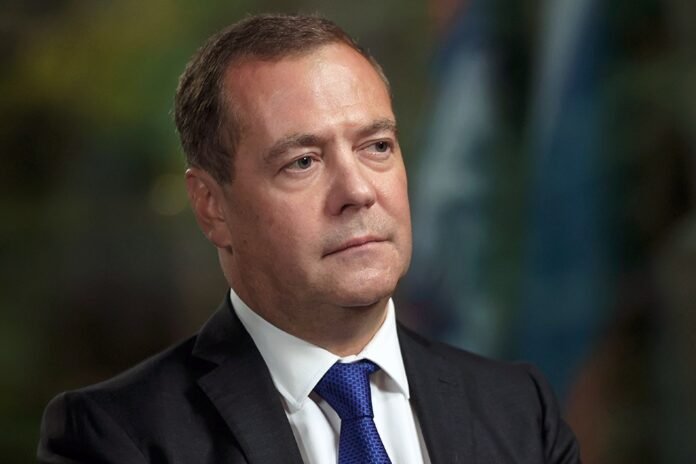 Result first. Nazism is near, but it will not happen

– The decision to launch a special military operation in February 2022 was a difficult and forced step under the pressure of circumstances. It was not only about protecting the fraternal republics of Donbass, but also about the security and sovereignty of Russia itself. It was impossible to delay it any longer.

– Fights in Donbass are not only about settlements. This is a continuation of Russia’s long-standing uncompromising struggle against “bastard neo-fascism and nationalism in all its manifestations.”

– The lessons of the Second World War have been completely forgotten by the Western states. Neo-Nazism has found support even in countries that have always declared their rejection of Hitler’s ideology, whose historical memory is full of pain, shame and anger.

– Russia will make the necessary efforts so that all the objectives of the special military operation are achieved, and the disgusting regime of the Kyiv nationalists ceases to exist.

Second result. No more illusions, today we are separated from the Western world by much more than we are united

– To talk and negotiate in the West now – there is no one with whom, there is nothing, and there is no need. The events of last year nullified the very possibility of a confidential and respectful dialogue with the representatives of this world “pole”.

– The Minsk agreements signed in 2014 were just a facade that concealed the true intentions of the West. They were started to “give Ukraine time to get stronger” and develop military power. That is, they were originally conceived to prepare for a bloody war.

– There is a general crisis of confidence in the so-called developed countries and in the legal institutions they have created. For the sake of political interests, it turns out that it is easy to dismiss the fundamental principles of legal relations. Such as the inviolability of private property and the rule of international law.

– For years, maybe decades, one can forget about normal relations with the West. We will do without them until a new generation of reasonable politicians comes to power there.

– And 2022, and at least eight before it, if we count from the “Crimean Spring”, passed under the sign of the growth of wild and irrational Russophobia in the Western world.

– In order to curry favor with the West, the Kyiv regime is desperately trying to “ban” not only any contact of its citizens and companies with Russia, but also any “Russian spirit”, Russian culture, even the one that has become legitimately in a world classic. .

– The West glosses over with delicate silence the actions of the Kyiv regime in the controlled territories, issuing in advance “an indulgence for all past and, most importantly, future torment and murder.”

– Some Western countries, which at some point gave rise to National Socialism and Fascism, are today responsible for the revival of Nazi ideology.

– It is impossible to trample Russia, and with it the “Russian World”, divide it or subordinate it to someone else’s will. The lewd hands of the Anglo-Saxons were short even in the most difficult moments for Russia. She won’t come out now.

Fourth result. The West has put itself in a cage. Let him sit in isolation.

– The world has entered a period of revolutionary transformations, and these are of a fundamental nature. New development centers are being formed that represent the majority of the world community and are ready not only to declare their interests, but also to protect them.

– There is a global ideological and philosophical collapse of the Western worldview, its model of world order. Under modern conditions, the West is generally unable to offer the world any new ideas that can advance humanity, solve global problems, and ensure collective security.

– The framework of traditional decency after the introduction of illegal and absolutely rude sanctions against Russia should no longer limit us in any way in the choice of methods of protection, including any use of the rights and property of economic entities of hostile countries. We have the right to do with your assets what we deem acceptable on the basis of our right.

– Most likely, several macro-regions will be formed in the world, each with its own internal rules and logic of development, but in general tuned in to partnership and dialogue, and not to confrontation. And the entire system of international relations will become not only multipolar, but also multistructural, based on the principles of benevolent non-intervention.

– The new world will be ready to cooperate with the West, but only on the principles of equality and mutual respect. Sovereign states no longer accept attempts to impose on them the principles of a world order modeled on American patterns.

– The fiercest rivalry between the West and the rest of the world will continue to grow. Russia will have to occupy its own special place in the new world, relying on the new rules of association and cooperation with friendly states.

Fifth result. Until the apocalypse

– Faced with serious threats, Russia has stressed more than once or twice that it is not fighting against the Ukrainian people, but against the Nazi bastard who has settled in Kyiv, who seized power as a result of a coup.

– The only thing that stops the enemies of Russia today is the understanding that our country will be guided by the Fundamentals of the State Policy of the Russian Federation in the field of nuclear deterrence. And if there is a real threat, it will act on them.

– New agreements on disarmament are currently unrealistic and unnecessary. The sooner the maximum security guarantees that are convenient for Russia are received, the sooner the situation will normalize.

Result six. Russia does not “survive”, but lives. evolve and win

– The main result of the outgoing 2022 can be called the great changes that are visible today in Russia. Now almost everything depends on the people, on their constancy and solidarity, patriotism and confidence in victory, maturity of thought and firmness of spirit.

– The process of maturation of Russian society is going steadily and is irreversible. The year forced our society to mobilize in the full sense of the word. Military, mobilized, volunteers, volunteers are true patriots of the Homeland, its pride and glory.

– Enemies failed to destroy our economy. In the economic sphere, a lot of work is now being done to reactivate the most important industries that guarantee the security and defense of the country.

– The State fully complies with its social obligations: salaries and pensions are indexed, all benefits are paid.

– The task of Russia in the near future is not only to protect the new territories in its composition, but also to make their life prosperous, safe and comfortable.

– The state will do everything possible to ensure that life in a large Russian family is normal and prosperous, it will give millions of people the opportunity to gain confidence in the future, it will always uphold the protection of their rights and freedoms, language and culture, faith and hopes.

Share
Facebook
Twitter
Pinterest
WhatsApp
Previous article
Rogozin announced the upcoming operation on December 26 to extract fragments of the KXan 36 Daily News column
Next article
In the Leningrad region, a drunken neighbor set fire to an apartment with children because of music KXan 36 Daily News