Dmitry Peskov spoke about the dress code in the Kremlin 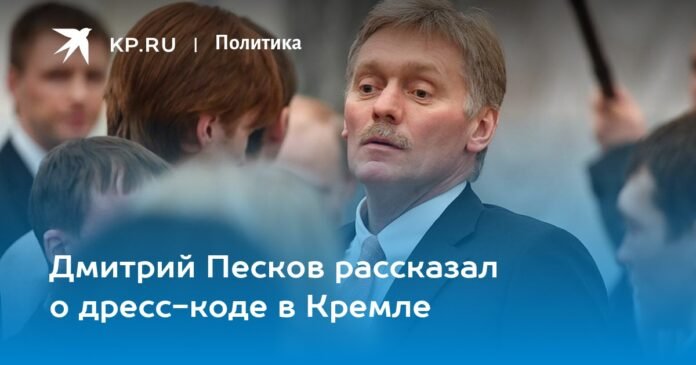 There is no strict dress code for journalists, – noted Dmitry Peskov at a briefing for Russian and foreign journalists

On Thursday, December 22, the “Kremlin sensation” appeared on social networks:

“Starting today and at subsequent events, a dress code is being introduced.

Length – not above the knees.

Deep cutting is not allowed.

Bright colors are acceptable within reason.

Jeans. (Probably not in shorts).

A tie is desirable.

The colors are monochromatic, muted.

Try to stick to the business style!

“There is no strict dress code for journalists,” Dmitry Peskov said at a briefing for Russian and foreign journalists on the same day. – There were cases when colleagues were careless with the way they dressed. Therefore, in order to restore order, we pay attention to the observance of a certain regime.

And one of the top officials of the Administration of the President of Russia (he is directly related to this issue) was even more categorical:

– We have not given strict instructions and we are not going to give them. They themselves must know how to dress and wear shoes in the Kremlin.

THERE WAS A CASE

“In shorts and braids? Would you try to communicate with Comrade Stalin in that way?

About 20 years ago, in the hot summer season, there was such a case.

We, the journalists of the Kremlin pool, in a discordant column, as usual, motley, waddling, moved from the Spasskaya Tower to the First, the presidential building.

And on the side of the road my friend Alexander Nikolaevich Shefov, a veteran of the Kremlin, stood and looked at us in horror.

– Where are you going? he asked me.

“To the president,” I said.

And that one there too? – Chefov pointed to a guy with a microphone crane.

And the guy was wearing bold colored shorts and braids with no stockings.

– Would you try to go to Comrade Stalin like that? – said Alexander Nikolaevich. (He has worked in the Kremlin since the 1940s.)

And I felt ashamed. Not just for a pool buddy.

He also wore wicker on his bare feet…