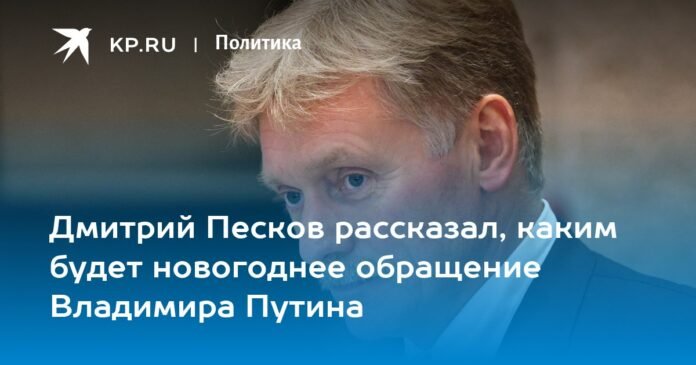 Press Secretary of the President of Russia Dmitry Peskov

… – Dmitry Sergeevich, tell us how the preparations for the recording of Vladimir Vladimirovich Putin’s New Year’s speech are going. – with this question, a journalist from Komsomolskaya Pravda began a conversation with an official representative of the Kremlin on Wednesday, December 28. – And will the current Call be different from the traditional ones? Well, it’s always different. But let’s just remember that on May 9, on Red Square, there was a completely different deal. That is, there, taking into account the conduct of the Armed Forces of Ukraine, the head of state, the Supreme Commander-in-Chief reminded those who are now in the line of fire. How will it be now, what will we hear and do we need help from Komsomolskaya Pravda?

“We are grateful for the offer of help, but thank God we have managed so far,” Peskov said. – This is the first.

We never say how and when the President’s New Year greetings are recorded.

I can only say that the head of state traditionally at midnight will turn to the Russians and congratulate them on the upcoming New Year.

The spokesperson, however, also commented:

– Each New Year’s speech of the president, of course, carries the imprint of the past year and contains some basic phrases, basic messages for the year that has begun.

So it will be this time…

– Usually we see the president against the background of a peaceful Kremlin, – I decided to continue the topic. – But during the course of the special military operation, Vladimir Putin visited military units and met with volunteers, and the other day we saw him in a combat vehicle. Maybe the interior will now be replaced or changed in some way?

– No, – answered Peskov, – no changes are planned.

– It’s probably good. Thanks a lot.