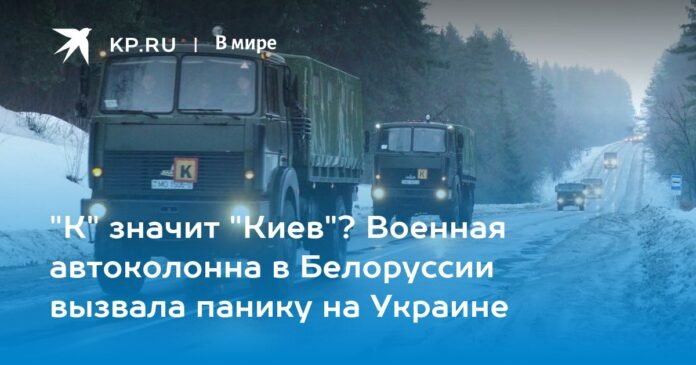 Trucks with the letter “K” scared the Ukrainians. Photo: Ministry of Defense of the Republic of Belarus

“Nightmare! Horror! Two dictators have agreed! Columns of military equipment are moving along the roads of Belarus, on the machines of which the ominous letter “K” is marked! This means that the army Russian and, probably, Belarusian continued A campaign against Kyiv together with them! Dear Nenka! – such moods now reign and disperse in the Ukrainian media and in the private public, citing as evidence photographs in which Clearly military trucks are driving the roads of Belarus these days.The military sit in the cabs and each truck has an insignia with the letter “K” in a yellow square on the radiator.

New hysterical cries have already been heard demanding from the allies to hand over additional tranches of money and weapons in connection with the emergence of a “new threat” to the Nezalezhnaya capital. Ukrainian military experts saw here a clear resemblance to the letters “Z”, “O” and “V”, which were applied to Russian military equipment at the time of the start of a special military operation in Ukraine. And they decided that “K” stands for Kyiv. Logically, what else can it mean in this case. Russophobia seems to have eaten away or conquered the remains of their last brains.

Because the coffin in this case opens not simply, but very simply. This letter in this version of writing and placement on a car means nothing more and nothing less than a statement of the fact that this vehicle is moving as part of an organized caravan. This is, of course, a warning, but only for motorists on the same road, so that they pay increased attention and do not show an excessive tendency to all sorts of maneuvers. For example, to overtake, especially in the “in the opposite direction”.

Traffic rules must be taught, Svidomo!

I will calm someone down now, I will surely annoy someone, but this whole story has absolutely nothing to do with Kyiv and, moreover, with its alleged upcoming assault. As for the military, no one hides the fact that the Russian military, including the mobilized ones, were trained in the training camps of Belarus under the combat coordination program.

So, gentlemen, Ukrainian analysts cannot appeal to the European and American allies with a request to send more money and weapons, showing these photographs as confirmation of a new threat.

It will not work.