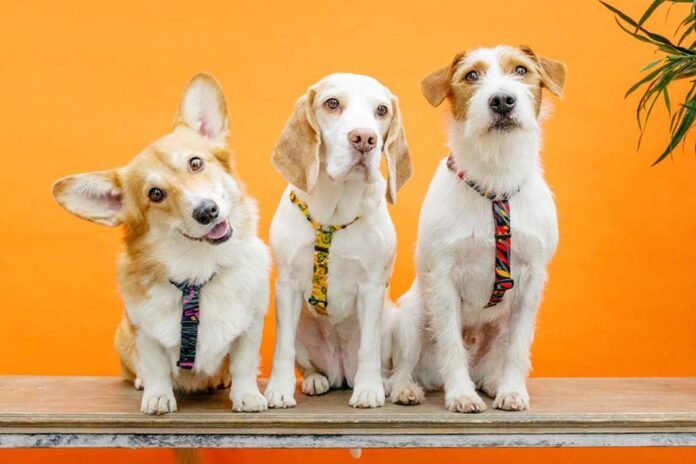 IPQuorum spoke with Sergei Lapenok, the founder of dog harness brand Bender&Frai, whose company has been producing beautiful and convenient collars, leashes, lanyards, address tags and other accessories for our four-legged friends for six years. For those who are especially agile, they have a Houdini harness and a martingale collar in their arsenal.

⎯ What is the difficulty of a dog’s life in a big city?

⎯ The city ⎯ is always stressful for both humans and animals. But it’s even harder for dogs. First of all, they need their habitat, and in the metropolis they are severely limited. Again, there is a lot of danger here: cars, salt, a huge number of different sounds, many of which sound threatening, like, for example, the same fireworks. In addition, a dog is an active creature, it needs to lose energy, and in the city it is difficult. Not all owners have equipped playgrounds nearby or a park within walking distance, where the dog can frolic to the fullest. Yes, and over time, people are tight. Most work all week. It is clear that the dog gets used to living at the pace of the owner, but that does not mean that she is comfortable.

⎯ How did you start dealing with ammunition for dogs?

⎯ Our company was founded in 2016. December 17, we just celebrated the 6th anniversary. But it all started, hackneyed as it was, with the fact that I had a dog and she needed ammunition. The assortment on the market was rather meager: unpretentious, but Chinese, or good, but European and expensive. Original products could only be found in private workshops via social media. Then my colleague and I came up with the idea to make something cool for our dogs and give it to others. What is difficult: buy material and sew? We show what happened to friends, acquaintances, subscribers of our dogs on social networks. The first orders began to arrive, mainly from acquaintances and friends. The first models were woven. They were made of ready-made materials, inspired by the experience of foreign colleagues. Then we add our developments, experience, ideas and launch the first collection of necklaces with our own prints. It turned out unusual. Not to say that we broke into the market and “broke” everyone, but among our dog lovers and the established community, this caused a resonance. Little by little we began to have clients and things were going well. We start to develop. We wanted to make products that will be used, so that they are functional and original. We didn’t succeed the first time, but over time we learned how to make things that meet the requirements for safety and durability, and at the same time also look good. When people ask me what we have achieved over the years, I always say this: the main thing is that we managed to prove that a dog can have beautiful, visually pleasing, high-quality ammunition that lasts for several years. In addition, we were able to present several fundamentally new models for Russia.

⎯ We were the first to launch the mass production of martingale collars in our country. What are its advantages? Firstly, the design is very reliable and does not allow the dog to run away. Secondly, unlike a choke collar or half choke collar, it allows you to restrain the dog without causing him any harm. In a relaxed state, the “martingale” simply hangs on the neck, but when pulled, it squeezes tightly. In this case, the load is evenly distributed around the entire circumference of the neck, which does not create the effect of strangulation. And thirdly, this necklace does not have a clasp (it is made up of two parts, where one pulls on the other). And if there is no bra, then there is nothing to break. The only way to spoil it is to chew it. This happens to our furry customers.

We also launched the production of Houdini harnesses. This model has an additional fixing belt, which prevents even the most agile dog from twisting, even when he is scared and really wants to run away. The belt is removable (if the need for it disappears, it can be easily unfastened).

⎯ What are your products made of?

⎯ We were looking for a material that would be durable and at the same time suitable for printing prints. This is one of our chips. Today we have a huge number of different patterns. Any owner will find something interesting for himself. As a result, we decided on a synthetic material with a rubber impregnation. It keeps its shape well and does not fade, does not lend itself to drying out or to the influence of temperature changes.

For the harnesses we use a polyester sling. And we have a lot to be proud of here too. Until recently, we brought a sling from the USA, since there were no high-quality analogues for it. But after the next sanctions package, this became problematic. We have traveled to many different industries. The search lasted from May to October, but in the end we managed to find a company that agreed to release the necessary material for the sake of the experiment. Initially, the production was released specifically for us. The composition is unique for Russia. In some respects, the material even surpasses the American one. And there are three reasons to rejoice. Firstly, now all our products are completely Russian and we have created opportunities for ourselves for further work, secondly, new high-quality material has appeared in Russia, and thirdly, money does not flow abroad.

⎯ It can be divided into two directions. There is a constructive fashion, created by specialists – cynologists and zoopsychologists. So, theories periodically appear that it is more correct to wear harnesses or collars with a clasp, that one type of collar is shown to a certain race, etc. For example, the re-sewing craze appeared because some people like to walk their dog hands-free. But this is purely our “dog business.”

And there is fashion in a broader sense. And it’s more of a human story. We are talking about design here. For the most part, a dog doesn’t care about the color of the collar. And a person chooses what he likes, what suits his image. For example, sometimes I choose a necklace that matches the color of my current clothes, the interior of the car, or just according to my mood.

⎯ Now let’s talk about impressions. How do they develop?

⎯ First there was a global business challenge ⎯ to create enough prints to meet market demand. Here it was important to take into account the colors that are associated with today’s fashion and the color of the most popular dog breeds. Then we start to take into account the so-called media fashion, that is, everything that people find in the media space. For example, this is how the collections dedicated to Harry Potter and superheroes appeared. Of course, there is also a certain seasonality. In spring, cheerful colors are better perceived, in winter – less bright and easily dirty. For winter 2023, four new patterns were released: “Polar Bear”, “Christmas Star”, “Fairy Fox” and “Sheregesh”.

⎯ The first three are more or less clear, but what is Sheregesh?

⎯ This is a charity patron. Sheregesh is a mountain resort in the Kemerovo region, it is loved by skiers and snowboarders from all over Russia. It is there that stray dogs find refuge in the husky park under the patronage of volunteers. Resort staff help them find first temporary and then permanent housing. When they contacted us, we decided not only to give them our products, but also to make a separate print that would convey the character of Sheregesh. Initially, we did not plan to release it for sale, but when the photos hit the net, we realized that it was in demand, which means that it could benefit homeless pigtails. We transfer 10% of ammunition sales with this print to Sheregesh. I think it’s great when, by buying a collar or a leash for your dog, you can help those who are still looking for their home and their person.

⎯ It’s not even a New Year’s tale, but a Christmas tale. But if I understand correctly, huskies are your personal story?

⎯ Yes. Each person has their own race. my husky why? It’s hard to answer. It seems to me that this is the best breed. This is a great companion dog, and they are quite independent, which I like. Also, his temperament is similar to mine. Between the owner and the dog there must be a certain correspondence of characters so that they can live in harmony.

⎯ Of course. Also, by raising a dog, a person emotionally and mentally changes his character towards the dog. And the dog affects the person.

⎯ Is your pet’s name also encoded in the Bender&Frai name?

⎯ No. My Austin only works as a model for our brand. The title contains the names of my dog’s father and uncle. We started the business together with my partner, who has these two dogs. We liked the sound of the name combination and made it our trademark.

⎯ As an entrepreneur with six years of experience, what advice would you give to aspiring entrepreneurs?

⎯ Probably the first and most important thing is to do what you like. Because if you set only profit as a goal, then success in terms of money and the company itself is not obvious.

Second, don’t be afraid. When I say that there was a niche that we wanted to break into, that there was no product on the market that we liked, it does not mean that there were no competitors. It was not entirely clear if we would find our place. We had a real chance of losing money. But interest overcame fear. Therefore, to run a business, it is important not to be afraid of losing money to run a business. If it doesn’t work, it means it won’t work, but if it’s successful, you can get a real deal.

The third, perhaps, is to carefully select partners and trust them.

This article and many other materials are published on the ©IPQuorum website, the first publication in Russia on creative industries and intellectual property. IPQuorum is a new format for the work of an international brand that organizes all the brightest events in the world of intellectual property and creative industries in Russia, including the LegalTech market and development institutions. IPQuorum professes an evidence-based editorial policy and demonstrates with reliable facts and destinies that innovations today arise at the intersection of different ideas and industries.

Share
Facebook
Twitter
Pinterest
WhatsApp
Previous article
Amediateka named the most popular series of 2022
Next article
Danila Kozlovsky, who did not receive money for the Karamora series, obtained almost 700 million rubles through the court and bought the rights to the project.