Don’t wear armor, don’t wear pink and don’t Sinatra: The most ridiculous laws in the countries of the world 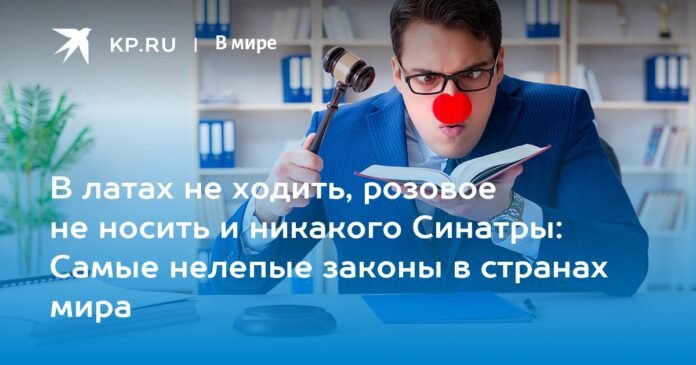 “Komsomolskaya Pravda” recalled the most ridiculous and incredible bans that work in different countries of the world.

Agree, sometimes it seems that people’s deputies in Russia are competing to come up with a more ridiculous law. It will be proposed to cancel alcohol for the New Year or a license to fry barbecue will be introduced. Another thing is that such bold initiatives are almost never approved in the end. But in the West, stupid, and quite valid, laws cost at least a dime a dozen. And some of them have been around for centuries.

“Komsomolskaya Pravda” recalled the most ridiculous and incredible bans that work in different countries of the world.

“I will split the clouds with my hands”

In Australia, in the state of Victoria, citizens are legally prohibited from wearing pink pants on Sunday afternoon. In theory, the rest of the days there should be no problem with pink pants, but who knows. In the same state, they can be sentenced to 10 years in prison for trading and corresponding with a pirate! Curiously, the law has been in place since 1958. Since 1967, it has been illegal in Australia to create rain clouds, with the exception of qualified amateurs, per. Also in the country it is impossible to change a burnt-out light bulb on your own. If you are caught doing this, you may be fined A$10. Another paradoxical law prohibits citizens from being in the same house with thieves. And all in the same law on vagrancy there is a note that you can be sent to prison for a year if you are near or inside a house that is being robbed. I wonder if they will soften the sentence if the thieves entered your house.

Despite the fact that France has long been a republic, the royal laws of the 18th century have been preserved in the country. For example, a light within a radius of five kilometers is not allowed to illuminate the king’s bedroom. For this reason, no projectors have been installed in the stadium of the Versailles football club. Because of this, the team is unable to play all its home games, for example, the match against Toulouse in January 2022 was moved to the opponent’s ground 700 km away. In the city of Châteauneuf-du-Pape, in the south of France, it has been illegal to fly or land UFOs since 1954. And in the municipality of Briollet, mosquitoes are abolished, there they are prohibited by local law. But the most beautiful prohibition is this: you cannot get drunk at work, unless you drink wine, beer or cider.

Britain has daunting bans that go back centuries. For example, normal quadrupeds cannot mate with royal family pets. By the way, until 1965 the death penalty was imposed for this crime. The royals clearly don’t believe in love at first sight between animals. Almost seven centuries have passed since the adoption of this law in 1313, and members of parliament are still not allowed to appear at meetings in armor and armor. With such a ban, King Edward II wanted to disarm the aristocrats who sat in parliament. In Scotland it is illegal to deny a visit to the toilet to people (even strangers) who knock on your door.

The scourge of motorists

In the United States, each municipality has the right to establish prohibitions that are not contrary to the constitution. What the mayors of the city actively use. In Denver, Colorado, it is illegal to drive black cars on Sundays. The reason for this ban is unclear. In Clinton, Oklahoma, it is illegal to sexually abuse a car, whether it is yours or your neighbor’s. Well, in Alabama, for its part, it is forbidden to drive a car blindfolded. So for the joke that usually follows the phrase “look as good as I can” in Alabama, you can get a ticket. There’s also an original automatic ban north of the US border: In Canada, you can’t get into a taxi with bad breath.

The Chinese have the most daunting prohibition. In the Celestial Empire, time travel is prohibited at the legislative level.

In 2011, the Chinese authorities said that science fiction, where characters are transported to the past, offends history, the laws of physics and banal common sense. Like, all that’s impossible in the real world is prejudice. There is a nuance: the ban applies only to cinema and television. But in theater and literature they allowed stories about “fallen”.

We have collected the most ridiculous and incredible bans that work in different countries of the world.

hymn of a lonely man

In the Philippines, it is strictly forbidden to perform the legendary song My Way by Frank Sinatra in karaoke. And there is a whole story behind it. At one point, the news was widely spread that after the performance of this song, 12 karaoke artists immediately took their lives in a short time. Let’s just say that a ballad about a long and difficult life path of a man excites such deep strands of the soul that many cannot stand it. Some Philippine journalists believe that the real problem is that this song is very fond of the Philippine mafia. And for the unsuccessful performance of a composition in karaoke, a person can easily be maimed or even sent to the other world.

chewing gum – in a basket

For decades, chewing gum has not been allowed in Singapore. Why chew there? You can’t even bring it into the country. And those who nevertheless somehow smuggle contraband, and then try to throw it out on the street, face a fine of $ 500 (35,000 rubles) or imprisonment for up to two years.

It is not known for certain what is the reason for such hatred of Singaporeans for chewing gum. According to one version, an unsuccessfully thrown rubber band caused a malfunction of the metro, which caused considerable damage to the country’s economy. Others attribute everything to the environmental awareness of the inhabitants of the city-state.

And in France, they thought of banning hunting on certain days: Sundays, holidays and school holidays. And by the way, according to polls, 78% of the French support this norm, even though hunting is an old and beloved male ritual in many rural regions of the country. Recently, however, various episodes of random killings of people on the hunt have had a great resonance. It was after this that the authorities announced that the hunters would be prohibited from drinking alcohol and on some days they would be completely free from the old fun.

By the way, in Great Britain the ban on hunting on Sundays has existed since 1831. In Italy it is forbidden to carry a gun on Tuesdays and Fridays, and the Portuguese can only hunt animals on Thursdays and Sundays. Hunters have complete freedom in Germany and Spain.