HomeLatest NewsDuring the concert, Yuri Bashmet “fucked” Tchaikovsky and admitted that he was...
Latest News

During the concert, Yuri Bashmet “fucked” Tchaikovsky and admitted that he was no longer a soloist 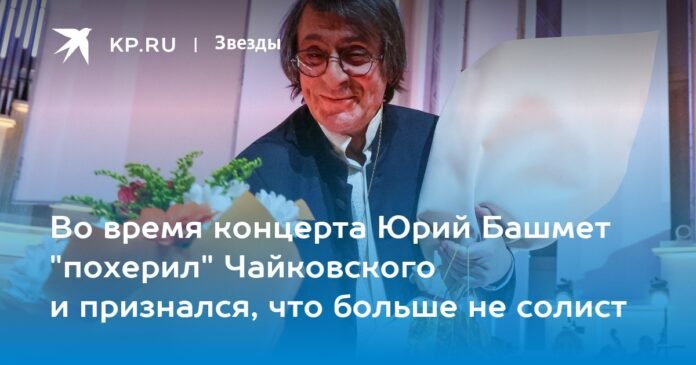 On January 24, Yuri Bashmet celebrated his seventieth birthday. On this occasion, the maestro gave a concert in the Tchaikovsky Concert Hall. One of the knowledge of the concert is its technical solution. Several screens were hung from the ceiling, on which photos of Yuri Abramovich were broadcast, and between performances of musical works, the birthday man himself appeared on the screens and told something interesting from his life. As you know, Bashmet is known as a collector of stories and skillfully poisons them.

This time, the teacher’s stories puzzled the fans.

“I’m Probably Not a Soloist Anymore”

Talking about the first concert with the pianist Svyatoslav Richter, Bashmet recalled Richter’s words: “The soloist is the one who is on the stage.” With these words, Richter, who was sitting at the piano, gave the main role to a young man with a viola, madly embarrassed by the “little-little” himself and the “big-big Richter.”

As you know, for some time now, due to back and leg problems, Bashmet was forced to work and drive sitting down.

– Probably, now I am no longer a soloist, – said Yuri Abramovich sadly during the concert.

Fans noticed the second oddity towards the end of the concert. Bashmet spoke about his fellow musicians and his portraits appeared on the screens. At some point large crosses appeared on the portraits, which caused bewilderment among the public.

The guests of the evening did not immediately understand the idea of ​​​​the organizers.

However, the answer to the question why Yuri Bashmet “poher” (that is, he covered with a cross) the images of his friends quickly appeared. It turns out that in this way the musician “adorned” the portraits with the cloaks of the musketeers. The book “Three Musketeers” remains the teacher’s favorite work since childhood. Bashmet ranked the maestro Valery Gergiev, the composer Alexander Tchaikovsky, and the pianist Alexander Toradze among the musketeers.

Yuri Bashmet always celebrates his birthday on stage. A superstitious musician has long noticed that if he celebrates this holiday differently, the whole year goes wrong. Therefore, the seventieth anniversary of the violist was no exception. (more)