HomeLatest NewsEach strike is thousands of projectiles not launched by the Ukrainian Armed...
Latest News

Each strike is thousands of projectiles not launched by the Ukrainian Armed Forces: how Russia selects targets in Ukraine 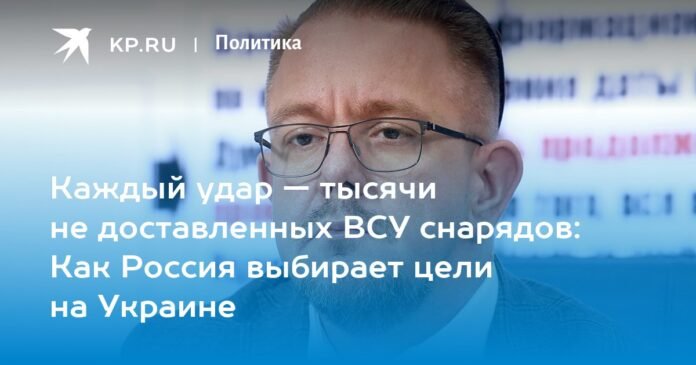 On Thursday morning, air-raid sirens sounded in Kyiv and Odessa, Kharkov and Nikolaev, and other independent regions.

On Radio Komsomolskaya Pravda on the air of Maria Bachenina, political scientist Alexander Asafov commented on the new attacks on the infrastructure of Ukraine.

– What does a new wave of strikes mean? Is this a harbinger of the next stage of the NWO?

– The Minister of Defense of Russia and other competent persons, including Surovikin, have said more than once why such attacks are carried out. It is necessary to interrupt the supply and support of the Ukrainian troops on the line of contact. This is largely due to logistics, aimed directly at supporting the activities of the Armed Forces of Ukraine. As well as control systems. Of course, we are also talking about energy infrastructure facilities. The tactics of bleeding units of the Armed Forces of Ukraine at the forefront – it is directly related to precise strikes on logistics and energy links. Each such attack means thousands of shells not being delivered to Ukrainian units and dozens of armored vehicles and artillery mounts not reaching the front lines.

– Is there a strike plan per day, per week – or do they continue to bomb depending on the situation?

– In my opinion, the reduction of Ukraine’s critical infrastructure is going according to plan. Moreover, we are talking mainly about objects that are predominantly not dual, but of a military orientation. It is strategically important to limit Kyiv’s ability to repair broken equipment and produce new ones. And also supply it with fuel. That is why they hit depots and fuel warehouses, repair plants. This all fits into one of the stated goals of the NWO. On the demilitarization of Ukraine.

– Do we want to completely destroy this infrastructure? And is it possible?

– It is difficult for me to give such an assessment. I am not an expert in military strategy and tactics. But I think that this story is not going in the direction of the whole, but in the direction of achieving goals for individual regions, for individual plants of the military-industrial complex. Strikes are held, their consequences are analyzed, the subsequent state of the Armed Forces of Ukraine is assessed, and the next strikes are planned. There is probably no 100 percent destruction goal here. What we are trying to convey must reach the Kyiv regime. We reduce the risks to our military personnel by minimizing the capabilities of the Armed Forces of Ukraine. At the same time, the media talks more about power plants and generators, and I would pay attention to the destruction of military facilities used to repair, manufacture and store weapons destined for the front line.

Voices from the interior of Ukraine: “People are angry, nerves are on edge. Everyone knows that Russia cannot be defeated, but they are not negotiating.”