Economic uncertainty forces families to park spending and save 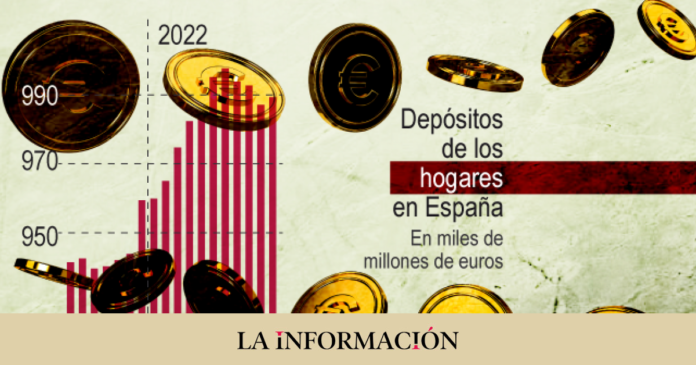 Families continue to demonstrate their preference for accounts and deposits to save despite their low pay. Savings on these products stood at 989.100 million euros in November, which represents an improvement of 4.8% year-on-year and once again has a shot at one trillion euros. As for companies, they will increase their positions in deposits in November by 2.2% to 312,600 million.

For both items as a whole, it means that savings stand at 1.3 trillion euros, according to data released by the Bank of Spain this Thursday (representing an improvement of 0.31% in the month).

Traditionally, household savings peak in July, to subsequently drop in the summer and return to the path of recovery from September. However, this year they have extended their spending, since this summer was the first to be lived normally after the end of the covid restrictions (only travel spending in the third quarter reduced by 25.8%, according to the INE ). Savings on these products in July set a record, standing at 997,000 million euros.

This expense lasted until October, when family deposits fell to 986.9 billion euros, to recover again in November, with 0.22% and 3 billion euros more. And it is that families face a quite complicated final stretch of the year. The rise in inflation, despite the fact that it has moderated in the final stretch of the year, is joined by the increase in the Euribor (and its impact on mortgage payments).

All in all, families still prefer to keep their money in deposits and accounts, despite the low remuneration offered by these products in Spain. This provides them with a cushion to face the uncertainty that plagues the economy as well as a possible recession due to the increase in rates by the ECB. Thus, if this trend contained in the Bank of Spain’s statistics continues, December could close with another record. And it is that from 2016 to November 2022 the money of families in deposit has gone from 771,000 million euros to 989,000 million, which represents an improvement of 28.29%.

Regarding company savings, which have a different evolution because it depends in many cases on their liquidity needs, they have also closed up in the eleventh month of the year compared to October. Specifically, 312,000 million euros, compared to 309,000 million in October. However, the record is held in December 2021 when company deposits ended at 323.2 billion euros.