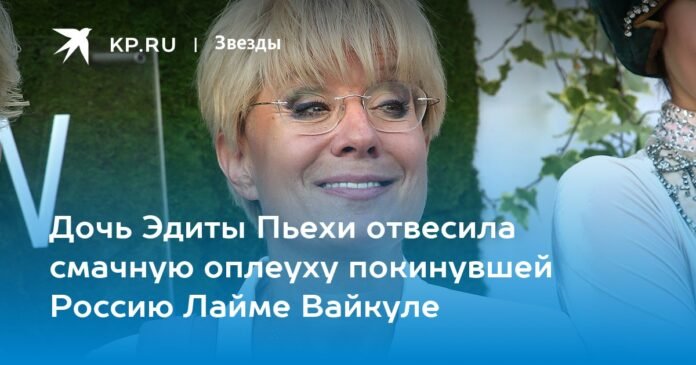 Social networks continue to discuss the words of the Latvian singer Laima Vaikule that she “supported the entire Soviet Union, and Alla (Pugacheva) supported all this Russia, which is now presenting her with something”…

68-year-old Laima Vaikule claims that, receiving 17 rubles for a concert, she collected stadiums: “Count how much money I brought to the state. For the disc released by Melodiya, which was sold in the USSR with a circulation of 20 million copies and sold for 2-3 rubles, I received 137 rubles.

She was supported by singer Maria Maksakova. Yes, yes, Maksakova said, Laima Vaikule “supported the Soviet Union.” And in general, “the Soviet Union owes you not only unpaid fees, but much more.”

Or maybe really, neither oil, nor gold, nor rockets, but our scenario fed the country?

We call People’s Artist of the USSR Edita Piekha. In the 50s and 70s, she collected rooms no less than Vaikule and Pugacheva in the 80s and 90s. Maybe she also “supported” the Soviet Union?

Edita Stanislavovna turned 85 this summer. The singer feels, as they say, because of her age. Instead, her daughter Ilona Bronevitskaya answered us.

– Of course, none of the artists, singers, musicians could support a country, especially such a big one like the Soviet Union or Russia. This is absurd! Edita (Piekha) would never have said that, says Bronevitskaya. – Yes, in the USSR, most of the income went to the state through the Lenconcert, Mosconcert, Gosconcert, the Philharmonic … But these organizations provided the artists with everything! It was an analogue of production companies. “Lenconcert” bought Edita and her musicians the best imported equipment, paid for clothing, travel, accommodation on tour. Edita and her orchestra had the best instruments. She was one of the first to receive (for free!) modern studio equipment with consoles, speakers… In fact, she had a self-contained studio. And the government paid for everything. Many things were free: apartments, education, all medicines… Today it is not like that.

– Laima Vaikule claims that she received 17 rubles for a concert. But these are pennies, even if the state sews you the best concert dress and gives you the best microphone…

– Lyme calls the “naked” bet. As far as I remember, the rate was not 17, but 19 rubles. But if there are two sections in the concert, then the rate is doubled. If it’s an outdoor concert, it rotates, then it doubles again. By skill – more … There were several concessions. Let me give you an example: at the rate of 19 rubles, Lyudmila Zykina received 300 rubles for one (!) tour concert.

Popular singers, which included both Alla Pugacheva and Laima Vaikule, earned decent money. Although this is not today’s 100 thousand euros for one performance, but still the Soviet system gave artists enough financial freedom, they lived in abundance. Laima Vaikule’s words about “she supported the entire Soviet Union” I take as an insult to my friend Alla Pugacheva. Well, the girls offended each other. Happens…

The duel happened in the family of Stas Piekha.