HomeLatest NewsEduard Uspensky: "I wonder why there is paper for publishing Brezhnev's books,...
Latest News

Eduard Uspensky: “I wonder why there is paper for publishing Brezhnev’s books, but not for my books.” 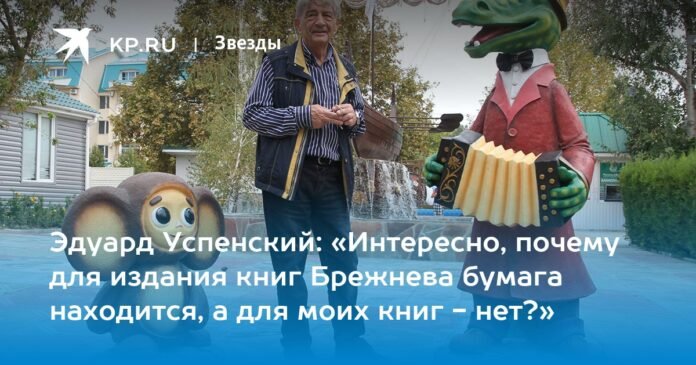 85 years of the birth of the great children’s writer

Eduard Uspensky died four years ago. Journalist Ksenia Rozhdestvenskaya later celebrated with a great article in which she wrote: “True storytellers don’t die. Eduard Nikolaevich Uspensky, who invented Cheburashka, continued to exist on August 14, 2018 at the age of 80 after a serious illness. He remains one of the most important writers in the Soviet Union and in present-day Russia.”

His work united and will unite for many years the most diverse inhabitants of Russia: liberals and statesmen, aesthetes and ordinary people. We all grew up on it. We memorized the phrases of his fairy tales and the cartoons that were based on them. “The young crocodile wants to make friends.” “We built and built and finally built.” “Oh, what an elephant it was, what an elephant it was!” “I don’t understand anything”. “It is I, the postman Pechkin, who brought a note about his son.” “My frizz has increased.” “You are wrong, Uncle Fyodor, have a sandwich” … The ingenious “Plasticine Crow” was also filmed according to its script. Like “Ivashka from the Palace of Pioneers.” What is there: even the cartoon “Baba Yaga against!” about how the forces of evil are trying to disrupt the 1980 Olympics, imprinted in the memory of those who are over 40 today. And there were also “ABVGDeika” and “Baby Monitor”, two programs without which one cannot imagine Soviet childhood. Or “Guaranteed little men”, who in the 2010s became the heroes of the hit series “Fixies” …

“THAT’S GOOD I’VE BEEN SICK – I COULD SEE USPENSKY!”

By education, Uspensky was a “technician”: he graduated from the Moscow Aviation Institute. It so happened that many of his graduates became famous in areas far from aviation. Musicians Armen Grigoryan (“Crematorium”) and Maxim Pokrovsky (“The leg cramped!”), satirist Mikhail Zadornov, director Elem Klimov, singer Maya Kristalinskaya …

Even in his youth, Uspensky made friends with graduates of other universities who were by no means literary, who were united by a love of creativity, for example, with doctors Arkady Arkanov and Grigory Gorin, builders Alexander Kurlyandsky and Arkady Khait. And also – another student of the Moscow Aviation Institute, Felix Kamov. The latter three eventually became the authors of the script for the iconic “Well, wait!”. Ouspensky was also offered to participate in the creation of the script. It didn’t work, but I already had a lot to do. With Kamov, they wrote pop and humorous numbers. In 1966, the collection “Four under one cover” was released (four are young authors: Arkanov, Gorin, Kamov, Uspensky).

And then a thin “solo” book “Crocodile Gena and her friends” was published – her first serious work. Of course, Ouspensky was not immediately called a great writer, but the author’s talent was obvious. Two years later, Roman Kachanov shot a cartoon based on the Uspensky scenario, and all the children of the country fell in love with the crocodile and Cheburashka.

Recently, a book about Uspensky “Once upon a time there was a writer” was published, which contains the memories of his friends. Some of the stories are amazing. The poet Yuri Entin says that Ouspensky once participated in a seminar at the Bolshevsky House of Creativity of Cinematographers. There arrived Filipp Bobkov, vice president of the KGB. He made a speech. He asked to ask questions. Uspensky got up and said: “I wrote six stories, they are on the table, they are not printed due to the lack of paper in the country. I want to ask you: why don’t we have paper? And why did the writer Leonid Brezhnev publish the book “Little Earth” and why was paper found for this? Could my six books be printed instead of this one?” Bobkov, turning purple, said “This is a provocation!” And left. And Uspensky was asked to pack up his things and leave the House of Creativity. But then he returned to the solemn banquet and said: “I want to proclaim a toast to the best friend of Soviet animators and comedians – Leonid Ilyich Brezhnev. And whoever does not drink now, I will write it down and send it directly to Comrade Bobkov! They all laughed. Entin recalls with surprise: “And he (and we) got away with it.”

And yet, for example, they say that Ouspensky’s favorite plant was a predatory sundew: in nature it feeds on insects, and the writer fed her doctor’s sausage at home. When she accidentally dried up, she forced her friend Alexander Semenov to go with him to the swamp and, almost drowning in it, she got another copy …

They remember Uspensky’s incredible energy and efficiency: “it bubbled, it burned, with a volcanic generosity it rained down” the ideas of those with whom he worked. How the children loved him. Once Uspensky, as part of a group of writers and actors, spoke in hospitals, boarding schools and orphanages, and one boy said: “It’s good that I got sick and ended up in this ward! I got to see the Ouspensky alive!”

By education, Uspensky was a “technician”: he graduated from the Moscow Aviation Institute.

“I WAS AT HOME, LIKE IN A CONCENTRATION CAMP”

With all this, Eduard Nikolaevich was a difficult person. And it will not be possible to keep silent about the fact that his life was not like a charming children’s fairy tale, and he himself did not always resemble a kind wizard.

For example, in the 2000s, Uspensky got into a rather ugly battle with the artist Leonid Shvartsman, who invented Cheburashka for the cartoon. That is, they created an image that we all know. At some point, Schwartzman noticed that the animal he had drawn appeared on various products, be it clothing or tubes of toothpaste. And he thought that he deserved to be paid royalties for this. But it immediately turned out that all rights to the character, including the image of him, belong to Uspensky, who registered Cheburashka LLC. Entrepreneurs turn to him for permits, and he gives them (naturally, not in vain).

It all turned into a painful legal battle. Shvartsman claimed that Uspensky, having handed over the script, did not take part in further work on the film, that the character on the screen is completely different from Cheburashka, as described in the book. Suffice it to say that he didn’t have big ears in the story. (In the introduction to the book, Uspensky describes a toy he had as a child that became the model for the hero: “Cheburashka was made in a toy factory, but they did it so badly it was impossible to tell who it was.” : a hare , a dog, a cat, or in general an Australian kangaroo? His eyes were large and yellow, like an owl, his head was round, hare-like, and his tail was short and fluffy, as is often the case with small puppies. “No Needless to say, the cartoon character’s eyes are not yellow at all, yes, and he doesn’t look like a rabbit…

Everyone, in general, perfectly understood that the truth was on the side of Schwartzman. The greatest animators and cinematographers stood up for him: Yuri Norshtein, Alexander Tatarsky, Nikita Mikhalkov. But the manufacturers of the very toothpaste in which Cheburashka was drawn calmly stated that they depicted the animal as Uspensky depicts it, and that the coincidence with the cartoon character was an accident. As a result, the artist recalled many years later, “the court made such a decision: Shvartsman could not prove his authorship. The court said that I am not the author of Cheburashka.” Ouspensky was quite satisfied with this result.

Another, much stronger scandal broke out after the death of the writer. His daughter Tatyana objected to the fact that the name of the “domestic tyrant” was called a literary award. The words “psychopathy” and “alcoholism” were used. In an interview with KP, Tatyana said: “The worst thing is that dad constantly criticized me. Googly eyes, bulging veins…he hit me a few times when I was in college my third or fourth year. He would hit me on the cheeks, in anger he would take me out into the street with my clothes in the cold… Towards the end of my stay in his house, my father yelled at me almost every day. No reason, just venting anger. At home, he was like in a concentration camp.

Even earlier, according to Tatyana, Eduard Nikolaevich handed her over, a girl, to a sect founded by a paramedic and pseudoscientist Viktor Stolbun; he firmly believed in the miracle of her methods. “My father said that in the Stolbun commune it would be fine, like in Makarenko, where there are “kind and exemplary people”. But I quickly realized that Makarenko was in a sect and did not smell. There were beatings and humiliation,” Tatyana told Komsomolskaya Pravda. She spent three years in the sect. And a few years later, her father took a dacha from him, which he himself presented: he settled the “stolbunists” there. It turned out that Stolbun slept with all the women of the sect, they gave birth to children to him, and Ouspensky knew about this and treated him quite calmly, “he covered all Stolbun’s depravity.”

After all this, speaking about Eduard Nikolaevich, a rare journalist will refrain from simultaneously mentioning the words “genius” and “villainy”. Of course, many try to justify it. They remember good deeds (there were many), tell how he defended his colleagues, how he helped young authors. His difficult character is explained, for example, by the fact that Ouspensky had a terrible relationship with his mother: she did not love him, he was happier for his son’s failures than for his victories. . Some say that life has taught him to trust people. Others, that he was spoiled by money, that he loved too much. The writer Andrey Usachev, who generally defended Uspensky, admitted: “he squeezed money where he could.” But at the same time he knew how to be generous and disinterested …

Be that as it may, it will definitely not work to “cancel” Ouspensky. In such cases, they remember with a sigh that Lermontov behaved disgustingly towards people, Mussorgsky became a complete alcoholic in his youth, and Caravaggio even killed two people. But we do not love them for this: the texts, music and images of the behavior of the authors did not get worse. So here. Magazines with heartbreaking articles will eventually be covered in dust, and Gena and Matroskin will remain for many years. Simply because in the entire history of Russian literature, few such wonderful children’s stories have been invented as fairy tales about a crocodile and a cat.

Share
Facebook
Twitter
Pinterest
WhatsApp
Previous article
RIA Novosti: In the Russian Federation created a “Korzina” simulator for precision bombing from drones KXan 36 Daily News
Next article
Caixabank will offset its higher costs with the strength of the Euribor