HomeLatest NewsEiDF breaks the ice in the park and prepares its OPS of...
Latest News 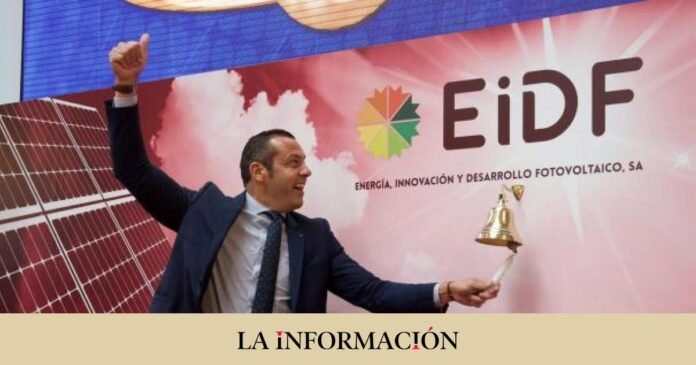 The cold winter in the markets has frozen the IPOs in Spain and abroad. One of the candidates to contribute to the ‘thaw operation’ is Energía, Innovación y Desarrollo Fotovoltaico (EiDF), the company of Galician origin specializing in photovoltaic solar energy installations. The company is completing the first steps to make the leap to the continuous market, in a move that will involve raising up to 200 million euros of new capital. It has already recruited the investment bank Lazard and the Gómez Acebo y Pombo law firm as advisers.

Tendam, Cirsa, Ibercaja… The brakes on IPOs in this troubled year 2022 have been repeated. The instability in the markets, with the long shadow of the macroeconomic situation, has led to a certain winter of premieres in the park. It is expected that 2023 will serve to arouse the interest of investors. EiDF is fully focused on making it so. The company has lived an intense year and a half in the BME Growth, where it accumulates a strong revaluation.

In this month of December he is completing the first steps to present credentials. On the purely economic side, he has confirmed the hiring of Lazard. And on the legal level, he points to Gómez Acebo y Pombo. This same Tuesday, December 26, he has also changed his auditor, approving at a general meeting the hiring of PwC for the next three years. According to sources from the advisors, the operation will involve a capital increase of up to 200 million euros. With it, it will be able to meet the requirements for shares in circulation (‘free float’) to join the continuous market.

The first steps to be able to jump from BME Growth (the former MAB) to the continuous market were taken last summer. In August it announced that it was going to propose to its shareholders the exclusion of this market in order to move to the stock exchanges. They gave it the green light in September. Now, the objective is to take advantage of the first big ‘window’ of departures that take place this spring, the same sources point out. Thus, the company’s goal of completing the transaction in the first half of the year is met.

The premiere at BME Growth was in the summer of 2021 and since then the growth has been amazing. It landed with a capitalization of about 75 million, which today reaches 1,600 million euros. The ‘rally’ started in April, when the company’s shares were barely trading at 10 euros. Today it remains above 27 euros. The rise of the photovoltaic sector contributes to this evolution, since its growth forecasts are very relevant.

On June 30, the company, with a staff of about 200 employees, approved to update the business plan for the next three years. The acquisition of the retailer Nagini, owned by the AC Solutions Group and which operates with brands such as NZWEI Energía, only ratified the need to review it. This new ‘roadmap’ forecasts revenue of almost 300 million this year with an adjusted Ebitda of almost 30 million. By 2025, it is expected to overcome the barrier of 500 million sales and 105 million in gross profit.

Since its premiere on the BME Growth in the summer of 2021, it has accumulated a strong revaluation until reaching a capitalization of almost 1,600 million

Founded in 2008, EiDF defines itself as a “vertically integrated photovoltaic solar platform”. In the self-consumption market for industrial and corporate clients, it claims a share of around 10%, after having installed 300 ‘megawatts’ in 3,000 projects. It has a line of construction and operation of its own generation parks to allocate energy to its marketing division. It has 152 ‘megawatts’ under construction. Regarding the supply of renewable electricity to the end customer, at the end of June (latest data available) it had 35,000 contracts and 1.2 terawatt hours.

The company’s shareholders are not very diversified, since total control of the company is in the hands of its founder, Fernando Romero, who, according to the latest data reported to BME Growth, owns 77% of the titles through his company Prosol Energia SL. The other partner that overcomes the 5% barrier is Alejandro Alorda Derksen, who holds 8.3% through the firm Mass Investments ARK 2021. The continuous market forces a significantly higher ‘free float’ than it currently has, due to which both will have to be diluted with the capital increase that is being prepared.

The brilliant evolution of EiDF on the stock market contrasts with the history of going public in the sector. This is the Navarra renewable Opdenergy, which began the race towards the park in 2021 with a valuation target of more than 1,000 million euros. Finally, he ended up lowering it to about 600 million. Banco Santander was the ‘court advisor’ for this premiere. Today the company’s shares are trading at 3.9 euros, with a 17% cut compared to the first closing in summer.

Share
Facebook
Twitter
Pinterest
WhatsApp
Previous article
Lavrov: Washington is thinking of attracting Ukraine to NATO “not by washing, but by rolling” KXan 36 Daily News
Next article
Board of Honor. Superhero teams that are changing the fashion in Russia here and now