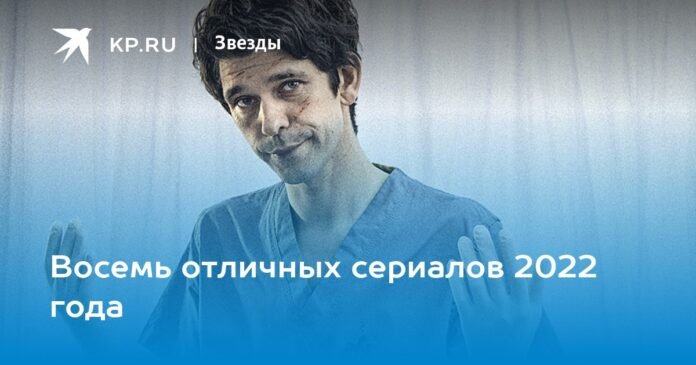 “It will hurt.” Photo: Still from the film.

So, all year you worked hard and did not have time for new TV shows. The Christmas holidays are a great opportunity to catch up. At least partially, of course.

Sister! Scalpel! Clamp! Do you like series about doctors? So don’t pass by. “It will hurt” differs from traditional medical procedures, which are built according to the scheme: “a small operating room, a small melodrama.” The fact is that this series is based on a book written by a popular British screenwriter, and once a practicing gynecologist surgeon Adam Kay. This is the truest truth about the disinterested and low-paid work of doctors, where blood constantly gushes from dissected uteruses. At the same time, the language does not dare to call the series too naturalistic. Every day they perform a feat that burns them inexorably from the inside… Incredible acting work by the lead actor and drama of the highest level.

Where to watch: Kinopoisk online cinema.

American Julia Child went to culinary school in Paris and fell in love with excellent French cuisine. It pains her to see how her compatriots eat all sorts of disgusting things and don’t even know what a real omelet is. And then a thought comes to her mind: what if we teach people to cook with the help of television? So she created the world’s first culinary show, overcoming the resistance of the producers: when they heard about the idea from her, they first sprained their fingers on their temples. And she became a legend. In each episode of the show, she proved that everyone is capable of cooking gourmet dishes.

American Julia Child studied at a culinary school in Paris and fell in love with great French cuisine.

The trick is that Julia Child really existed, she is an icon in the world of mass cooking. The names of the dishes are placed in the titles of the series – after each one, you just want to run to the kitchen and cook, cook, cook!

Where to see: Amediateka* online cinema.

“Wednesday”. Photo: Still from the film.

No, it’s not about Wednesday – that’s the name of a gloomy girl from the famous Addams family, where everyone has paranormal abilities (if you don’t know her, it’s not scary, this is not an obstacle to watching the series). Wednesday’s parents send Wednesday to Nevermore School, where they study paranormal children, but she manages to become an outcast among her own class. Wednesday doesn’t believe in love or friendship, but of course she will have to prove her wrong. And fight for her life: someone wants her death badly.

If we remove the mystical component, then an instructive and at the same time exciting story about the formation of a child in a team and relationships in a family will remain, which is useful for both adults and children to watch.

Where to watch: Netflix**.

The United States in the second half of the 19th century experienced rapid economic growth. In this context, the father of the young provincial Marian dies, leaving her penniless. A blue-blooded girl is forced to seek refuge with her arrogant aunts in New York. Pursing her lips, she still accepts her nephew, and a new life of hers captures her head. Lavish secular receptions, intrigues; mutual forks of tribal nobility and without a year a week of rich industrialists. And, of course, the first love.

The slow and ironic story of a provincial woman in New York is capable of capturing the attention not only of women, but also of men, who often turn their noses at period dramas.

Where to see: Amediateka* online cinema.

A young woman, Valeria, works in a clothing market for the Kyrgyz and is going to marry one of them. Even converted to Islam.

At the wedding ceremony, the groom’s brother is killed, a weird bastard. Valeria is considered the murderer, she is arrested. There is no chance of liberation, everywhere there are scum, perverts and indifferent people.

But this is not a drama, but a thriller: a morphine-addicted investigator, a hapless lawyer with cerebral palsy, an erotomaniac security guard, the head of the pre-trial detention center, a pervert and, most importantly, a mysterious series. . manic, they find themselves in a whirlwind of mounting suspense.

But that’s not all: Valeria’s past is riddled with terrible secrets, unknown to her at the moment. The main Russian thriller of the year, we don’t give a tooth!

Where to watch: Top-tier online cinema.

The drunken policeman Gosha, with a tragic face and a stutter, travels around St. Petersburg, turning on Bulanova’s songs to the fullest, and hating his partner, the rosy-cheeked Muscovite Vadik. At work, they meet the inhabitants of the night city: strange and different, but invisibly connected to each other. Gosha has almost no reason to live, and Vadik dreams of becoming a stand-up comedian: each thinking about their own, they investigate the theft of girls’ bodies from morgues. If he has long wanted to understand what is so special about St. Petersburg, the series will help him with this. It is about the fact that in the impenetrable darkness there is its own charm, if you believe that the dawn will ever come. Perhaps the best Russian series of 2022.

Where to watch: Okko Online Cinema.

High school student Alice will soon go blind and her mother keeps it from her. But the girl is already in the know, quietly angry with her mother, and she decides that since she will soon be disabled, she needs time to live to the fullest and see all the most interesting things with her own eyes. To get money, she tries to sell her virginity to a rich pervert.

This is not a smut, as it may seem, but a very smart and, despite all the drama, brilliant film that will help adults and adolescents to understand why it is so difficult for them to understand each other.

Where to see: Home online cinema.

The talented surgeon Kirill has a tumor on his head. He finds himself in a strange hospital, where conspiracies are heard in the operating room and amulets are used. But all this is not anti-scientific heresy, rather the opposite: almost all of us have some kind of evil spirit that makes us sick. All this has been studied and classified for a long time, the work of doctors is not easy, but necessary. Kirill becomes a patient and a doctor at the clinic.

Where to watch: Ivy online cinema.

*Also on other platforms that provide access to Amediateka (for example, Kinopoisk in the Plus Multi rate with Amediateka).

**This service officially no longer works in Russia due to sanctions. However, this did not become an obstacle for many Russians. Let’s call it parallel import.