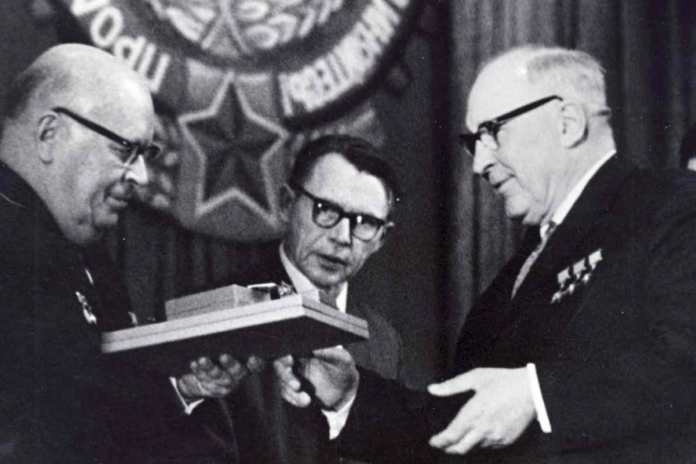 – The start-up of the new plant was a decisive factor in the worldwide increase in the production of enriched uranium, which made it possible to establish a strategic nuclear parity and guarantee the security of our country. Today, ECP provides stable and reliable production of enriched uranium for nuclear power needs, is active in the global market for stable and radioactive isotopes, and processes depleted uranium hexafluoride. High production rates and constantly growing demand for ECP products allow Zelenogorsk residents and staff to look to the future with confidence, says Alexei Likhachev, General Director of Rosatom State Corporation.

The decision was made to build a defense enterprise for the production of weapons-grade uranium in the Krasnoyarsk Territory, on the banks of the Kan River.

The first blocks of gas centrifuges were put into operation in the chemical cleaning workshop. ECP adopted one of the most innovative industrial technologies of the time.

The electrochemical plant reached its design capacity. By Decree of the Presidium of the Supreme Soviet of the USSR of September 15, 1970, the company’s personnel were awarded the Order of the Red Banner of Labor for the success achieved in the development of new equipment and advanced technology. ECP IN director Bortnikov was awarded the title of Hero of Socialist Labor with the Order of Lenin and the gold Hammer and Sickle medal.

In the ECP, several tens of grams of iron 57 isotope were obtained with an enrichment of 80 percent. Centrifuge technology has been successfully applied to separate isotopes of other chemical elements (other than uranium). ECP was the first company in the world to introduce industrial cascades of gas centrifuges to obtain stable isotopes. In 1972, the first batch of iron isotope was shipped.

The production of highly enriched uranium for the manufacture of nuclear charges has been stopped. ECP’s main product is low-enriched uranium, which is used to produce fuel elements for nuclear power plants.

The last gas diffusion units of the chemical workshop were shut down. Since then, ECP has been using only gas centrifugal isotope separation technology, recognized as the most advanced and economical method known in the industry.

The first uranium hexafluoride liquid phase transfer unit was commissioned. The overflow facilities themselves allowed the Electrochemical Plant to become a full-fledged participant in the world market for services for the separation of uranium isotopes.

The “W-ECP” plant was commissioned, the first plant in Russia and the third in the world to convert depleted uranium hexafluoride into uranium oxide, which is safer for long-term storage.

A cascade of gas centrifuges built on the basis of existing equipment was put into operation to produce a highly enriched uranium (HEU) product. This project enabled the production of fuel for fast neutron and research reactors.

A plant was commissioned to produce uranium oxide (UU) from enriched uranium product (EUP), a new marketable product for the company, one of the initial fuel components for fast neutron reactors.

At the ECP, a massive re-equipment of the main technological equipment with state-of-the-art gas centrifuges has begun. The commissioning of new equipment is being implemented as part of a program to modernize production facilities at the Fuel Division of the Rosatom State Corporation with a phased replacement of previous generation gas centrifuges until 2042.

Start of construction of the second “W2-ECP” plant, which will increase the volume of depleted uranium hexafluoride processing up to 20 thousand tons per year. The launch is planned for 2023.

Share
Facebook
Twitter
Pinterest
WhatsApp
Previous article
Putin signed a law extending state support for small bookstores until 2025 KXan 36 Daily News
Next article
Latest news on the situation in Ukraine on December 29, 2022: why Kyiv took up arms against Zhevago and when Zelensky dreams of ending the fighting