HomeLatest NewsEstonia blames "its" Ukrainian refugees for overexposure to Finland. why do...
Latest News

Estonia blames “its” Ukrainian refugees for overexposure to Finland. why do they do it 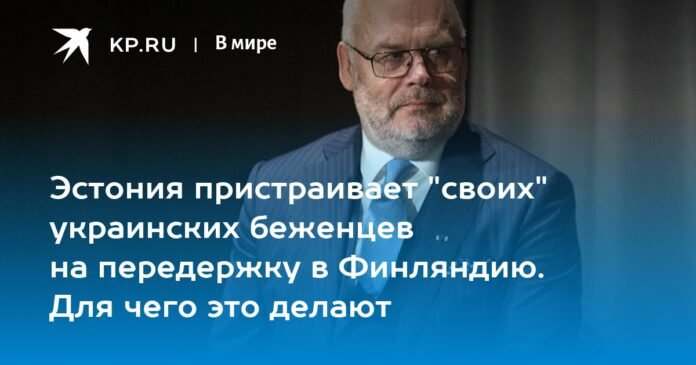 Alar Karis, as usual, blamed Russia for all the sins and expressed confidence that Estonia will continue to support Ukraine.

Something mysterious was Estonian President Alar Karis’s New Year’s address to his fellow citizens. No, he, as usual, blamed Russia for all the sins and expressed confidence that Estonia would continue to support Ukraine by sending woolen socks and mobile toilets to Kyiv: “May our government and civil society have the strength to continue to provide this support in the new year, because this evil does not go away immediately, but very slowly”. What bad, where does it go and where, and why is it very slow?

I would venture to suggest that the not very transparent allusion in this passage refers to Ukrainian refugees who have settled in Estonia. Because Tallinn is now negotiating with Helsinki, wanting to share some of the Ukrainian refugees with its neighbors. And the Finns don’t seem to mind, but they’re only prepared to welcome 50-100 people a week to their land. One teaspoon per hour. Even at the maximum of the year, Estonia will be able to transport a little more than 5 thousand people to Finland at this speed. And what should Estonia do with the rest? The situation is bad.

Judge for yourself: at first, 120,000 Ukrainian refugees arrived in Estonia, but many considered the Baltic republic a transit zone, and as a result, a little more than 65,000 remained in the country. For one million 300 thousand of its population, the figure is very worthy. But in neighboring Finland, where the population exceeds 5.5 million people, only less than 50 thousand Ukrainians can eat. So after all, not only the population is different sometimes, but the economic situation of the countries, to put it mildly, is not the same. In Finland there is no extra money, but in Estonia there is not only extra money.

According to Estonian Prime Minister Kai Kallas, “there are no more places in the republic to house new refugees from Ukraine” and, moreover, “they have access to the benefit system and therefore have a concrete impact on Estonian taxpayers.” . Such an impact that the country’s government is preparing the introduction of electronic supermarket cards for the poor. True, even here poverty comes out of all holes in Estonia – the amount of assistance to these categories from the government will not exceed 30 euros per quarter. 10 euros per month. With such an allowance, it’s only fair to stretch your legs.

However, the main concern of the Estonian government lies on a completely different plane: not economic, but humanitarian. Tens of thousands of Ukrainian refugees are a great risk to the growth of the Russian-speaking community in Estonia. Which is quite logical, given that the Ukrainians do not speak Estonian at all (at most – “hello, thank you, goodbye”), and the locals hardly speak the Ukrainian language. What’s left then? That’s right, the great and powerful, who is well known to both sides.

“We don’t want a new community in Estonia where they don’t speak Estonian,” Kallas admitted. – This is the course we took from the beginning.

He even asked the refugees to learn Estonian, but the call, to put it mildly, had little effect. And this is probably the main reason why the Estonian government wants to expel Russian-speaking Ukrainian refugees and send them to Finland, where they will have to learn Finnish whether they want it or not. Well, the economic benefit, of course.

And now the Ukrainians who did not have time (could/did) to learn Estonian will have to learn Finnish. The main thing is that it does not work, as in Latvia, where suddenly (after 10 months!) It turned out that Ukrainian children in local schools where they are taught in Latvian have very low academic performance. It turns out that they do not know Latvian! As a result, many schools have decided to abandon traditional assessments and focus on teaching their local language. But here another ambush was discovered – it turned out that many teachers also do not speak Latvian in a sufficient volume. Last year, 166 teachers were fined for such ignorance of the state language in Latvia, and in preschool institutions, according to the Department of Language Control (State Language Center, a state institution subordinate to the Latvian Ministry of Justice), the ratio of such “ignorant” offenders reaches 30% of the total workforce.

The right word, all these troubles could have been avoided if it were not for the persecution of the Russian language, generated by the Russophobia of all these actors. So, in general, there would be no refugees from Ukraine at all.

But they did not want to live in a simple and boring way without problems.

Share
Facebook
Twitter
Pinterest
WhatsApp
Previous article
Xi Jinping: Perseverance and solidarity will help win the new phase of the fight against covid KXan 36 Daily News
Next article
Likhachev believes that Dynamo will set themselves the goal of winning the Russian Cup