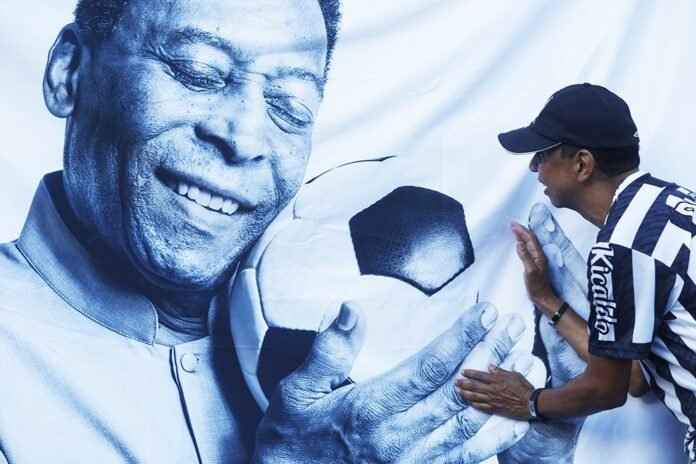 Along the way, people hung flags with Pelé’s image, jerseys with the number 10 on the back, fan scarves and banners. Despite the 30-degree heat, only in the first three hours about four thousand of their compatriots managed to say goodbye to the legendary footballers. According to the military police, it will take an average fan 2-3 hours to reach the coffin. However, nothing stops the Brazilians and, according to the Santos city council, the queue continues to increase systematically.

Earlier it was learned that the president of Brazil would come to say goodbye to Pelé. “The President of the Republic, Luiz Inácio Lula da Silva, will pay his respects and tribute to Edson Arantes do Nasciment Pele and show solidarity with his family at 9 am on January 3 in the city of Santos,” the press service reported. of the head of state. the state said in a statement.

One of those who said goodbye to Pelé was carpenter Roberio Batista Ferras, 52, who took four hours to get to Santos, and then another 2 hours in line for the coffin. “I will remember these six hours forever. I came to say goodbye and thank him for what he did for Brazil. Just thinking about being by his side, even in the coffin, moves me. He is a legend and there will never be another.” like him,” Ferras said.

The 29-year-old Brazilian lawyer has also come a long way to fulfill his moral duty to the King of Soccer. His young age did not allow Carlos Matiusso to catch a single Pelé game, but his father’s memories were enough to dedicate time to him and pay tribute to the legendary soccer player. “I heard my dad talk a lot about him when I was a kid. It was worth it facing the queue, the heat and the travel time. We will never see anyone play the way Pele played again. Eternal king!” – shared experiences Matiusso.

FIFA President Gianni Infantino, also present at the farewell ceremony, said the soccer organization will ask all countries around the world to name one of their soccer stadiums after Pele to commemorate the Brazilian athlete.

Let’s remember that Pelé passed away on December 29, 2022 from complications of colon cancer. At the time of his death, the footballer was 82 years old.