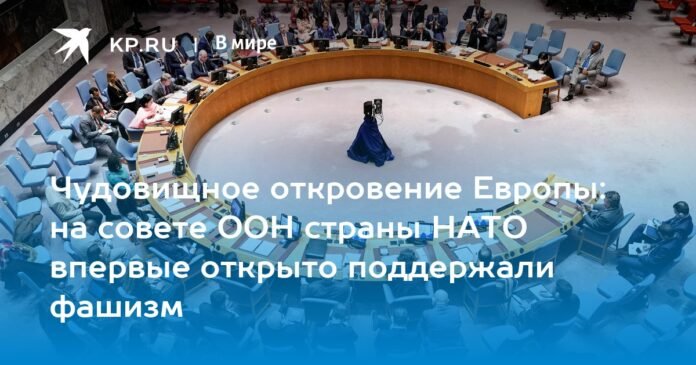 This time, 120 countries voted in favor of our resolution, 10 abstained and 50 opposed it.

On Thursday, the UN General Assembly adopted a resolution introduced by Russia to combat the glorification of Nazism. This document is submitted for consideration every year in December, and traditionally its draft is prepared by our country.

It recommends that states take specific steps, including legislation, to avoid review of the results of World War II and denial of crimes against humanity. It intends to condemn any propaganda of Nazism, neo-Nazism and other modern forms of racism and xenophobia.

Year after year, the resolution was supported “strongly” by an overwhelming number of UN members. Only two countries consistently voted against: the United States and Ukraine. The Americans justified themselves by saying that they supposedly have free speech and that nothing can be banned, not even swastika and torchlight processions by Hitler’s followers. Well, with Ukraine, then everything is clear – there the worship of Bandera and other Nazi henchmen has long risen to the absolute. The members of NATO and the European Union, for the most part, abstained from voting so as not to anger Washington. And the countries responsible for unleashing World War II – Germany, Italy and Japan – have always supported the Russian resolution. Furthermore, on the sidelines, the representatives of these states swore to their Russian colleagues at the UN that they would never “vote against a document that condemns the glorification of Nazism.”

But times change and oaths, as it turned out, are easily forgotten. This time, 120 countries voted in favor of our resolution, 10 abstained and 50 voted against, including all immediate EU members and candidates, as well as NATO members. Turkey is the only one of this alliance that has allowed itself some kind of opposition. Although it is part of NATO, it has traditionally abstained from voting.

But even an awkward zigzag in the position of Western countries is not indicative, which, having taken over the American command under the trump card, set out to “stab” Russia in this way. By the way, they even tried to include in our draft an amendment condemning the special military operation of the Russian Federation, but the relevant UN committee immediately rejected it as having nothing to do with the topic. It is shocking that those states that started the most terrible war in the history of humanity, and those that suffered from Nazism and even disappeared for a while from the political map of the world, openly opposed the document denouncing Nazism. And only thanks to the Red Army, its borders were drawn again. Austria got rid of the “Anschluss”, and Poland was reborn from the ashes of the General Government of the Third Reich. Than? Have you already forgotten or don’t want someone to remember? No wonder the Polish authorities are tearing down monuments to Soviet soldiers with such zeal. Soon, it seems, they will reach the cemeteries where they are buried. Or they will start erecting memorials in honor of local SS men, as is already happening in the Baltics.

And all these Romanians, Hungarians, Finns, Spaniards and God knows what fascists who spilled rivers of blood on our land, mostly raging on the civilian population, now you can also sculpt heroes out of them? After all, these countries voted against the Russian resolution. Yes, and those whom we freed in heavy battles, whom we always supported in the most difficult moments in their history, once again betrayed us with pleasure – Slovaks, Czechs, Montenegrins, “brothers”, Bulgarians … Yes, now Moldova is also in this system got stuck.

Of the Europeans, only Serbia remains next to Russia. Well, as always, the vast majority of states are from other continents.

The Deputy Permanent Representative of the Russian Federation to the UN, Gennady Kuzmin, speaking after the vote at a meeting of the General Assembly, printed his Western colleagues:

– By voting against, do you think that by doing so you have condemned Russia’s NWO in Ukraine? No. In fact, it has shown its true nature and the dominant views of the ruling elites. For you, the policy of revision and denial of history, the policy of tolerance of racist and xenophobic rhetoric, the policy of arrogant superiority, said our diplomat, is the norm.