HomeLatest NewsEurovision 2023 will restart: the collapse after the departure of Russia, the...
Latest News

Eurovision 2023 will restart: the collapse after the departure of Russia, the political manifesto of Ukraine and the new rules 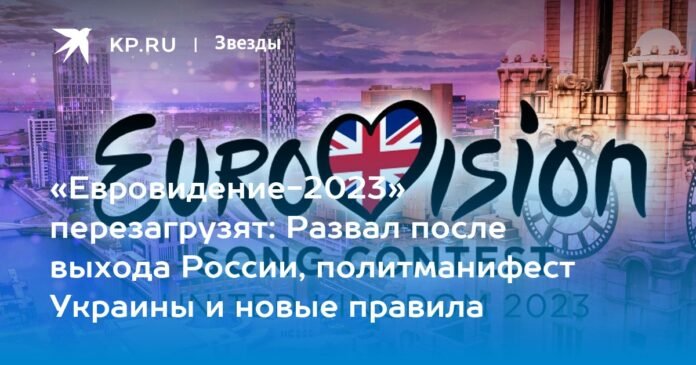 From May 9 to 13, 2023, the United Kingdom will host the Eurovision Song Contest, a song contest that has recently had purely political overtones. Since last year it was won by representatives of Ukraine, the show was supposed to take place on the territory of this country. But this did not happen. The project was taken from the winners and transferred to Liverpool. What to expect from Eurovision this year, KP is trying to think.

Rejection of Russia – minus half a million euros

As we already wrote, after Russia left the European Broadcasting Union (such a step followed after the country was eliminated from the competition), the Eurovision organizers lost about 500 thousand euros, which our country paid as a fee as the main participant. . What followed? The “hole” in the budget hung on all that remained. And therefore at least Montenegro, Bulgaria, Bosnia and Herzegovina and North Macedonia, for whom paid participation in the show is a heavy burden, have refused the competition so far. It turns out that already less than 20% of the participants. And this is only the beginning.

The EBU has already taken care of the problem. And they began to sprinkle ashes on their heads.

– The decision to exclude Russia was difficult, – admitted the organizer of the competition, Martin Oesterdal. – And now it’s hard. What Europe thinks has a very strong influence on competition. What is the mood and feelings in Europe? Such is the social context. When we say that we are out of politics, we must always defend the basic and highest values ​​of democracy.

The rules will change: Russia will be able to vote

It was after the strange victory of the Ukrainian group Kalush Orchestra in Eurovision 2022 that they decided to change the rules of the show. Now the public will turn on when voting already on the stage of the semifinals (previously this happened only in the grand final). Another innovation is that viewers from non-participating countries will now be able to vote online. Their votes will be added up and converted into points, as from a separate country, in the semi-final and final. No exception for Russian viewers is mentioned in the message.

In December, the national selection for the competition was held in the kyiv metro. And their duet won, which had already tried to qualify for Eurovision more than once – the Tvorchi group (translated as “Creative”) – Andrei Gutsulyak and Jeffrey Kenny. The musicians, according to legend, met “on the street by chance, when Andrei approached Jeffrey on the street to check his level of English and talk to him: the relationship turned into a collaboration in which the Ukrainian became became a music producer and the Nigerian became a songwriter and vocalist.” Both studied at the pharmaceutical faculty of the Ternopil National Medical University. They play electronics, the first album was released in 2018. And in Liverpool they will sing a song dedicated to… “the defenders of Azovstal”. No one can explain how this relates to the basic tenets of the show, in which political manifestos are strictly prohibited.

Do you already know the winner?

The participants of the next competition did not have time to submit songs (the national team was not even held everywhere), and the bookmakers had already brought Ukraine to first place. How is that? Very simple. Analysts believe that the chances of winning “Creative” – ​​20%, while the rest of the participants in the show – from 8% or less. The coefficient for the victory of the Ukrainian group varies from 2.75 to 3 (the amount of the bet will be multiplied by this figure in case of victory). Bookmakers put Italy in second place (from this country the winner of the Sanremo festival, which will take place only in February), will go to the competition. So far, the third place is occupied by Great Britain, apparently, due to the hosts. The top five favorites, according to the bookmakers, also included the Swedes and the Spaniards – they have approximately the same chances of winning.