HomeLatest News"Every house, every street is gnawed": why is it difficult to get...
Latest News

“Every house, every street is gnawed”: why is it difficult to get to the front line, and the cities are not taken in a hurry? 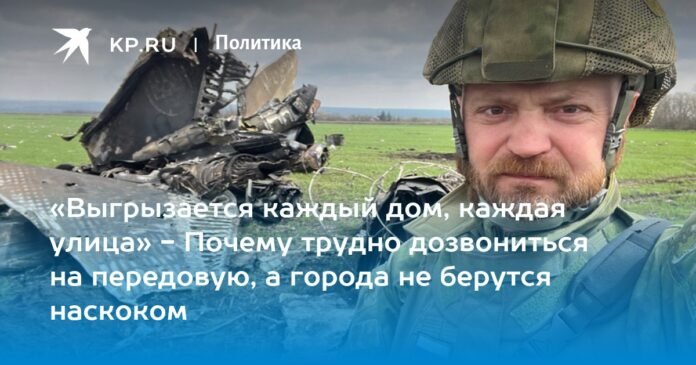 The military correspondent “KP” on the Youtube broadcast “Komsomolskaya Pravda” answered questions from readers of our newspaper.

WHAT DOES VOYENCOR “KP” DO IN HRC

– First of all, we congratulate you on your inclusion in the Human Rights Council under the Russian presidency. What is your activity in this Council?

– This is actually a consultative body that develops proposals for the president on the development of civil society and the protection of human rights. This organization does not work with citizen appeals. There is an office of the Commissioner for Human Rights Moskalkova, that’s where they deal with citizens’ appeals.

But in the CDH there are many representatives of human rights organizations (and not only) that are working with these appeals. For example, Tatyana Georgievna Merzlyakova, the Sverdlovsk Ombudsman, who traveled to the special operations zone several times, actually communicated with the fighters at the front. She entered the Council as a representative of the military corps. But there is no organization behind me, so I personally deal with citizens’ appeals, to the extent that I have the strength and time.

– Can something be solved?

– We did not have a field post office. Now it has appeared, but there are complaints about its work, some parcels are being returned, they do not reach the addressee. Not always some things happen because of the Ministry of Defense. I treated the case of a woman, whose two packages did not arrive. There are still shortcomings in the work of the Russian Post. Because it was the first time they met him. Now a lot of things are automated at the post office, I put a tick in the wrong place, and that’s it, the parcel is returned. These issues are currently being worked on. The connection of family members with fighters is very important. The family of a regular military man knows very well that if a husband, father or son does not communicate for a month, this is normal, it happens with a military man. And when people are civilians, a month ago his son worked in a factory, and now he is a soldier, and he has not been in contact for two weeks, people are already worried. There are places in the special operations zone where the connection does not pick up or where it is forbidden to go on the air, because the enemy will hit the cell signal right there. Therefore, I urge relatives not to try to get your child or husband to call you constantly. Sometimes a call from the front line is dangerous.

HOW TO DELIVER A THERMAL CAMERA

– We have the following question: “Who can I ask for help with thermal imagers? The husband is mobilized, he wrote to our governor, he said that big expenses … “

– It is necessary to look for volunteers in their regions. Or turn to those who have already proven themselves. There is no single center to call and they send you what you need right away. And, unfortunately, there is a saying: “For whom is the war, for whom is the dear mother.” There are cases when humanitarian aid, which is sent at the request of a fighter, is suddenly sold somewhere on the black market. Therefore, if I, for example, work with someone, then only at the request of the commanders of a particular regiment or brigade. Here the artilleryman comes to the chief of artillery of the regiment: “I need 3 helicopters, 2 thermal imagers.” He calls me. These are the ones I work with all the time, I can’t supply everyone. There are divisions with which we have established good relations, I help them.

This is also work: finding a supply channel. There is no such thing as here it is, the free market, choose a volunteer to work for you. But proactive commanders are building it all themselves. And where the commander does not want to do this, there is a little worse with the supply.

It is clear that now the activity of heavy machinery has decreased. Because the thaw has turned the fields into an impenetrable mule, and the driving of tanks on the asphalt is ruining the roads.

MOBILIZED SCHOLARSHIPS. AND THERE IS PROMOTION

– There was a popular forecast that the fighting would slow down with the arrival of winter. Winter has come, but our Artemovsk has been successfully pushed. There are battles for Soledar, Avdiivka…

– The Great Patriotic War was not interrupted by winter. Yes, and the capture of the Donetsk airport in 2015 or the battles for Debaltseve were also in winter. It is clear that now the activity of heavy machinery has decreased. Because the thaw has turned the fields into an impenetrable mule, and the driving of tanks on the asphalt is ruining the roads. At the same time, we see that the enemy is attacking the Swatovka line literally every day. But the attacks are repelled there. By the way, already our mobilized.

We see a “meat grinder” around Artemovsk, a step-by-step offensive is underway in the Ugledar region, a movement towards Avdiivka, heavy, stubborn, because every house and street is being gnawed at. The enemy is very strong. That is, there are positional battles, but with little progress. The workload of the Russian artillery has increased by an order of magnitude. In addition, the accuracy has increased.

– We have come to the conclusion that we are forming the same reconnaissance attack circuit, when the target of the scouts in front is transferred directly to the gun and opens fire in 2 minutes, you can instantly count it. And in such a scheme, the mobilized are already working successfully. I ask their commanders: “But how do they shoot?” To which he is quite serious to me: “Jewelry!”

“I DO NOT HIDE THE PROBLEMS. BUT THIS IS MY ARMY!”

– We have people who do not fully understand what happened to Kherson. Andrei Gribanovsky asks: “Why do you constantly talk about the successes of the Russian army, and then this army leaves Kherson?”

– I cannot be responsible for everyone, I am only responsible for myself and my reports. I am not writing that everything is fine with us, that there are no problems. I always talk about them. Maybe not as sharply as someone would like, because after all, this is my army. And the troubleshooting in it depends on me, among other things. I am participating in this, unlike those on the couches blaming our native Armed Forces. According to Kherson, there is no simple answer. There it was impossible to completely protect the supply lines. Therefore, unfortunately, we had to leave the city so that our grouping could take up the defense on already prepared lines.

Yes, it was a great legacy that General Surovikin inherited from previous commanders. It is clear that when we started the special operation, we had something else. But it turned out that the Ukrainian army was preparing for this conflict. It turned out that the population was brainwashed with Russophobia, and no one greeted us with cakes and flowers. For some it was a revelation. Unfortunately, many still lived with the 2014 notions of the Ukrainian army. But that doesn’t mean we lost. Here you can delve into the reasons for a long time, but the people who are fighting do not have time for this, they are doing their job.

– Zelensky said that there would be no talks until Russia withdraws to the 1991 borders. Where do all these statements come from?

– It is very difficult to suspect Zelensky of independence. If his curators want to force him to negotiate with Russia, he will be the first to run and say: let’s talk. Well, this is a person like a pregnant woman: she has a very unstable mood.

– We call on Kyiv to withdraw troops from Donbass – well, it is clear that they will not do it there. There are still forces to resist. And Zelensky is not even worried about losses.

– Why are Ukrainian weapons still quietly supplied from the West?

“Maybe because we don’t have enough intelligence?” There are logical questions: why haven’t we destroyed all the railway bridges and tunnels yet? First of all, they are very difficult to break. They were built under the Soviet Union to withstand air raids. The experience of the same Antonovsky bridge near Kherson proves this. To be clear, Russian light vehicles came out last night. Although there were 142 hits on this bridge by the American Hymars. They simply put thick sheets of iron on top of the funnels. And we drove. And what can we say about railway bridges! You need a lot of high precision weapons to take them down.

But let’s see how further attacks on the enemy’s critical infrastructure will be carried out, because this also has a great effect. Let it not be lightning fast, let it be cumulative.

– I have a dispute with the citizens of Ukraine in absentia about this. Listen, if you run out of electricity and water, Donetsk has been without water for several months. Kyiv has been killing the infrastructure of Donbass for eight years, but everyone was silent and silent. I see it here, but I don’t see it here. So it turns out? And electricity problems in social facilities are solved very simply – with diesel generators. They will ask their authorities why generators are not installed in their hospitals. Why is it more important for your authorities to spend money on shells with which they hit peaceful Donetsk neighborhoods? Ask about it.

OUR DEFENSE IS HERE WHO CAN BREAK THE CONFLICT

– Obviously, the main beneficiaries of the conflict in Ukraine are not even the West as a whole, but the United States. What has to happen for them to say: that’s it, enough, enough.

– They will stop at nothing. I assure you that they are not aiming for Ukraine to defeat Russia. They have one goal: to destroy Russia. To exhaust financially, to shake from within – this is the task of the Americans. Many may say that this is a stamp, propaganda. But not! This is the reality.

And therefore it seems to me that the main beneficiaries can be the Russian industry, the defense industry, science, which now, as in the Great Patriotic War, must grow by leaps and bounds and supply to the front what can break the conflict. . We have no choice at this time. When the United States is so close to its cherished goal – destroying Russia – they simply won’t give up on this goal.

The men mobilized in the trenches say: “We want to attack!” What is Russia waiting for?

“They rejoice like children when they hit targets”: how the mobilized Russians fight in the NVO zone