HomeLatest NewsFamous economist Roubini: "75 years of peace and prosperity are over"
Latest News

Famous economist Roubini: “75 years of peace and prosperity are over” 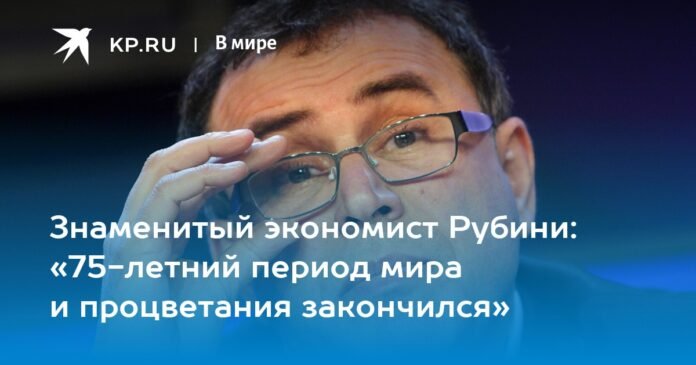 Roubini says 75 years of “prosperity and optimism” are over

The American economist Nouriel Roubini, who once predicted the global crisis of 2008, said that humanity will soon plunge into the abyss of wars, pandemics and famine.

According to Roubini, the 75-year period of “prosperity and optimism” is over and nothing good should be expected in the near future.

– Now is a different time, it is different from the last 75 years of relative peace, progress and prosperity, because before that the history of humanity was a history of famine, wars, diseases, genocide, etc. The last 75 years are the exception, not the rule, said the economist in an interview with the Financial Times.

Roubini believes that at this moment humanity has serious new threats that continue to accumulate, without receiving due attention from those in power. Roubini refers to such threats, for example, climate change, trade wars between countries, the spread of extreme views in politics and, oddly enough, artificial intelligence, which, by the way, according to the economist, will soon leave many blank. collar workers out of work.

To overcome these and other challenges facing humanity, according to Roubini, it will take “luck, global cooperation and almost unprecedented economic growth.”