HomeLatest NewsFlying people and Sergey Garmash in a fur coat: what happens on...
Latest News

Flying people and Sergey Garmash in a fur coat: what happens on the set of Pavel Lungin’s fairy tale 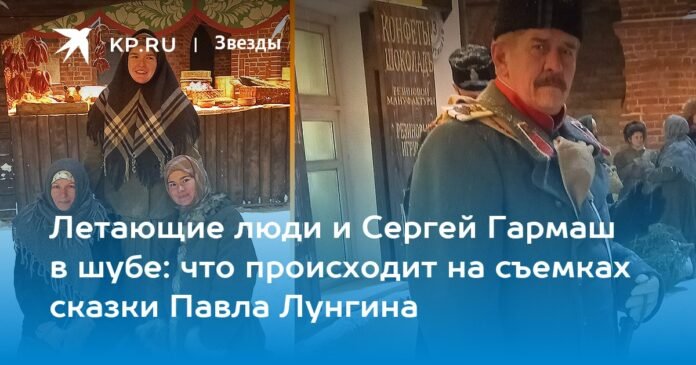 Director Pavel Lungin began filming the New Year’s block of his fairy tale “Vasilisa and the Queen of Likes.”

Pavel Lungin (films “Island”, “Taxi Blues”, “Tsar”, “Brotherhood”) began filming the New Year’s block of his fairy tale “Vasilisa and the Queen of Likes”. A KP.RU correspondent turned out to be at the December New Year shootings.

Fly not in a dream, but in reality.

– Miracles: people fly, – the servant of the Assumption Church winked at me and disappeared behind his door. Yes, I myself saw how a man rose above the ground and turned his head. The following is a lady with a child. And one girl who took off was completely thrown into a snow-covered New Year tree, from which the snow immediately crumbled …

Well, of course, all these people do not fly alone – they have cables behind their backs that descend from a cantilever crane. They are thrown upwards and then land awkwardly on springboards set into the ground.

“Breed carefully, this is not an ordinary person, but a child!” – commanded by the stunt coordinator. And another double “jumps” into the air.

Pavel Lungin creates a fairy tale in the Krutitsy Patriarchal Complex. The Christmas market is in full swing here!

There are old lanterns with a dim yellowish light in the square. Along the perimeter in height – multi-colored paper flags. In the center of the square is a huge living Christmas tree, decorated with painted homemade toys. The artists made special copies of old Christmas tree decorations for several months. The fairground carousel is rotated by hand with the command “Motor!”. Nearby is a high hill on crossed wooden legs. Shopping centers are strewn with food and all sorts of things: bagels, bagels, suckling pigs, pickled cabbage with lingonberries in barrels, samovars, scarves, whistles… Traders shout something, tie it up. Girls in headscarves pull a sleigh with a Christmas tree. Laughter, fun. Policemen, soldiers, gendarmes, townspeople, young and old – a crowd of people of all stripes, but of various ranks, dressed in fur coats and hats, or simple peasants.

Pavel Lungin creates a fairy tale in the Krutitsy Patriarchal Complex. The Christmas market is in full swing here!

Outgoing December 2022 is on the calendar, and here at the Krutitsy Compound is a 1900’s New Year’s Fair!

The illuminators thought of lifting a huge ball of air that glowed from within on wires above the set to provide light. They put a lighting fixture as a wall. Bonfires were lit in the corners. Near one, my son froze, stunned by such a fairy tale.

– What is the name of the story? – I ask the policeman who took me to patronize with a saber.

– Vasilisa and the Queen of Likes.

– According to the plot, there are several realities: both fabulous and mystical, and the realities of the past, which are being filmed now. In general, everything is intertwined in this fairy tale: both the witchcraft of the past and the modern magic of bloggers…

– We shot the second plan. Call the children! shouts the second director.

A group of guys rush onto a snow covered patch. They play tag, throw dolls…

Lungin’s story is filmed right at the foot of the Assumption Church. He, by the way, is active, and during the day, while the fair was being filmed, he worked, the service was performed. But with one correction: under the muffled ringing of the bell. It is now clear why Lungin’s shooting does not start in the morning, traditionally, but after mass and in the late afternoon. Usually there is a nervous atmosphere on the film set, but here everyone is relaxed, and the shooting went on as usual, like in a fairy tale. And the filmmakers near the Assumption Church behaved somehow peacefully, harmoniously, no one cursed or yelled … In the dead of night, the temple was closed, and on the contrary, filming under its walls was gaining impulse.

– I pass carefully, you see, the hoses of the fire truck, – the fireman tells me. An hour ago it was easy to walk here in the backyards of the “fair”, and now there is water under your feet, in some places you fall into artificial lakes up to your ankles.

– What do you have here? I am amazed when I see a fire truck.

“Fire,” says the man in the fire helmet.

At that moment, there was a girlish squeal, screams. running around. I look, the people of the fair who recently walked calmly rushed in alarm, pandemonium. I see the flame.

The fire is put out by firefighters.

– Do not step on the wires, today is a difficult stunt shot. We set fire to the pyrotechnics, – says someone from the film crew.

– Let’s rehearse the path of fire, – offers the pyrotechnician to Lungin, who has emerged from his cabin. In front of my eyes, they stretched the wire, sprinkled it with snow, as if it did not exist. “Set fire,” ordered the pyrotechnician. A path of fire ran the length of the cable, invisible to the naked eye, and at the end it burst into flames. It extended to standing men in sheepskin coats. They began to shake and fall.

– These are specialists, – a stern man briefly explains to me.

“Do not torture the animal”

– Children, do not torment the animal, stay away! – shouts the assistant director as in a zoo to a spokesperson. I look, they brought a sleigh with a skin and a real deer with huge antlers. And on lungin to the deer, the symbol of the old New Year, with all the “here you are.” And straws, it seems, were thrown away. And the acting children, like flies, are scared away from the horned artist. “Don’t get close, he’s going to get angry, he can kick”, the employee of the film crew got more angry than a deer. It seemed that the artiodactyl demonstrated an Olympian calm. And in the frame he behaved indifferently. Looks like Santa was supposed to arrive on a deer sleigh, but I couldn’t find him. The transport with Santa Claus horns was turned away from the children. He buried his nose in the snow with interest. “Where is the deer from? From private dealers,” the girl from the film crew tells me unfriendly and with a suspicious look. Irritation was brewing in general in the group: the extras obviously strained the filmmakers. And where to go You don’t make a single good movie without extras, you have to put up with it and treat it with respect.

Santa Claus with a beard, but not cotton

As you know, in a movie, not all the frames are shot sequentially one after the other, but they are intercut. Having sent the extras to warm up with tea, the cameras on the rails went to the icy house, from which a girl in a white dress, resembling a fairy, peeked out. He did not let the main character, the girl Vasilisa, enter the threshold … The director’s assistants, grabbing plastic shovels, piled snow against the wall of the house, and the artist Vasilisa was sitting on this snowdrift. And they began to film how she froze, poor thing (make-up artists skillfully covered her with powder and even whitened her eyelashes, like Marfushechka in the fairy tale “Morozko”).

Finally, the extras screamed again. Once again, the round dance of people was spinning merrily. The Krutitsy Complex revived and cheered up. My son sat by the fire and refused to say goodbye to him, really, and not pretending to be warm (all in favor: he finally agreed that it was time to replace the fashion-forward sneakers with regular boots). So, roughly speaking, he warmed himself by the fire, as in the fairy tale “Twelve months.”

– Eh, but not a single famous artist, – loudly annoyed.

– Why, Sergey Garmash is walking. Yes, there, in a fur coat and a sable hat. He plays the role of Santa Claus.

I didn’t recognize Garmash at all. In this outfit, the face of a famous artist is hard to see. And in this segment of the shoot, he didn’t do anything special in the frame. He walked near the Christmas tree like a gentleman.

– He plays that girl’s grandfather, the main character, – experts explain to me in general terms. By the way, in this role, Lungin was going to shoot Pyotr Mamonov, who played in his “Island”, but the actor, unfortunately, died, they found a replacement.

… Garmash did not leave his cell phone and it was apparently out of order. He did not want to be photographed. He quickly froze and puffed up in disgust in a separate personal make-up, he just looked at it. I was about to go on guard, but two “deuces” clicked on the clock, and the shooting did not even think to end. “Midnight is divine and they leave it later, but they pay extra for processing,” the extras say with resignation (in these shootings, the foremen did not salivate their fee for extra artists, giving each 2,000 rubles per shift plus 200 rubles per hour of work). prosecution). “Soon the fairy tale is told, but Lugin’s fairy tale is not over soon! After all, a meticulous master!”, – they explained to me.

Meanwhile, Garmash sat in his trailer, just in time to yell, “Grandpa Frost, come out!” Afraid that at midnight I would turn not into a pumpkin, but into an icicle, I gave up. The son also confessed: “He froze, they rolled Sivka-burka.” And we went home to warm up, and the master of fairy tales Pavel Lungin continues the “magic” from him. He says it’s time for fairy tales.