HomeLatest NewsForeign cars in showrooms left for a month. Then what?
Latest News

Foreign cars in showrooms left for a month. Then what? 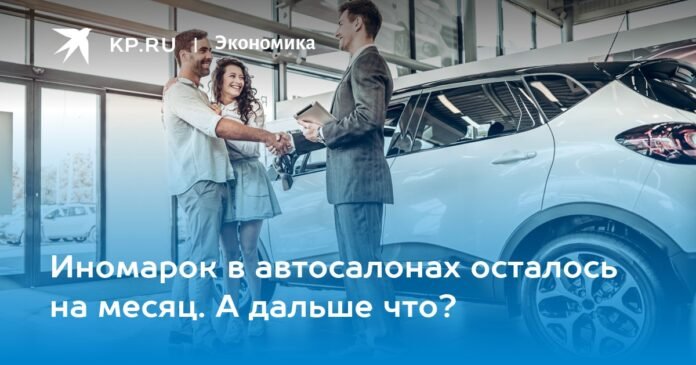 Despite the fact that almost all Russian car dealers have established deliveries of new cars through parallel imports, their volume is not enough to cover the needs of the market.

The automotive world is sounding the alarm: according to the Association of Russian Automobile Dealers, new foreign cars are left in warehouses for no more than a month.

“We are talking about cars from leading European, American, Japanese and South Korean brands,” Yang Haytseer, vice president of the National Automobile Union, told kp.ru. – The manufacturers of 46 car brands announced their withdrawal from Russia or the suspension of production, and this loss will be difficult to compensate.

However, according to the expert, the “car counters” will not be empty: Russian and Chinese cars, as well as products from parallel imports, will take the place of those who left.

– But all this does not compensate for the loss of the auto industry, – said the interlocutor. – We see that sales volumes are falling, many distributors stop their activities. But if in quantitative terms there is at least something – the products of the Chinese or domestic auto industry, then in qualitative terms the losses are irreplaceable. If earlier, coming to a car dealership, a buyer could choose a car for every taste and for any task, now there is no such variety. Car dealerships, in order not to close, raise prices to unthinkable heights, but our consumer is still not used to the fact that an economy class car cheaper than 2 million rubles is no longer found.

The fact that the automotive industry is going through difficult times was confirmed by the dealers themselves.

– The Avtodom company has more than 50 Audi, BMW, Mini, Mercedes-Benz, Porsche cars are available, Andrey Olkhovsky, General Director of Avtodom, told kp.ru. – This will be enough until the end of the year, and the rest will depend on demand and the general situation of the automotive market.

First of all, inexpensive foreign cars disappeared from car dealerships.

“So if someone needs a conditional Skoda Octavia, they should go to a car dealership as soon as possible, because it won’t be there soon,” explained Igor Morzharetto, an auto expert, partner at the Avtostat analysis agency. . – There have been no receipts from most stamps since March, so everything is going as expected: out of stock. First of all, this applies to budget brands KIA, Hyundai, Wolksvagen, Skoda…

WILL PARALLEL IMPORTS SAVE?

We rely on parallel import, why not save?

– Parallel import works, but there are about 5,000 cars a month, says Morzharetto. – This is very little: at least 30,000 new cars are sold in Russia per month.

In other words, it turns out that parallel imports do not cover more than 15 percent of the need.

“Despite the fact that almost all Russian car dealers have established deliveries of new cars through parallel imports, their volume is not enough to cover the needs of the market,” Denis Migal, executive director of the Fresh Auto automotive market, confirmed to kp. . Ru. – Basically, expensive models are imported by the piece, which were not supplied to Russia before. And in order to mass import large numbers of foreign cars, it is necessary to eliminate difficulties with logistics and customs clearance, otherwise their delivery will be unprofitable either for the dealer or for the final buyer.

Still, the effect of parallel imports is notable.

– Deliveries of cars and spare parts of the premium and luxury segment have been organized, – says Olkhovsky. – As part of the deliveries, both new and low mileage cars are imported. As part of parallel imports, the most popular models will be those that are not supplied through official channels. Now, thanks to such deliveries, dealers have new cars from Jaguar, Land Rover, Porsche, BMW and others. The range of electric vehicles, which are supplied as part of parallel imports, has also expanded on the Russian market.

But he does not have high expectations of the prospects of this direction.

– Next year, parallel imports will take no more than 10% of total car sales, – says Olkhovsky. – I think it will not have a significant impact on the general level of the market.

To expand the parallel flow, it is necessary to change the legislation, experts say,

“We have protective tariffs that were taken when it was necessary to protect the domestic auto industry from the pressure of cheap, high-quality imports,” Heitzeer explained. – But now the situation has changed, but the duties remain. Under such conditions, it is profitable to engage in parallel imports only for individuals, but they cannot provide large volumes of supplies. It is also necessary that it be profitable for legal persons; then parallel imports will make a more significant contribution to total sales volumes.

WE JUMP, BUT WE GO

And yet there is hope. First of all, it is associated with the domestic auto industry.

“AvtoVAZ has announced that it will produce more than 400,000 vehicles next year,” Morzharetto said. – This is a lot if you compare with the result of this year – it is expected that 180 thousand cars of this brand will be sold. Moskvich announced the release of 50 thousand cars. I expect a small, but an increase in parallel imports. Deliveries from China will continue, and I hope that these will not only be quite expensive crossovers that are now being delivered to us from there, but also cheaper cars, within 1-2 million rubles.

Newcomers, Iranian cars, may hit the Russian market next year.

– There are two large companies and several smaller ones that are interested in entering the Russian market, – said Morzharetto. – But in terms of technological level and quality, they are not higher than our VAZ. Iranian models are assembled, as a rule, on the platform of French cars of older and much earlier generations. But there are original developments in the bodies, that is, they look good outwardly. In general, there are no obvious monsters, but there are no breakthroughs either.

Iranian companies Iran Khordo and SAIPA have expressed their desire to enter the Russian market. The latter introduced the Shahin C-class sedan for this purpose.

However, according to the expert, Iranian cars will be bought only if they are not more expensive than VAZs. And the shelling taxes and shipping costs make this problematic. So our Lada will account for 1.5 million and the same, but Iran for 2-2.5 million, and who will buy it? Therefore, if we want to not only import Iranian cars, but also sell them, then we must organize their SKD assembly here.

In general, according to the expert, if 650,000 new cars are expected to be sold by the end of the year this year, next year sales will amount to 750,000 new cars, both foreign and domestic.

That is what will definitely become a lifesaver for Russian motorists – these are used cars. Sales grow every month. So, November did not disappoint: it turned out that 5% of those cars were sold more than in the previous month. In addition, according to the Avtostat agency, in November 2022, our people bought more than 460 thousand used cars – this is the maximum figure for this year.

Also, used foreign cars will not be those that circulated on our roads, but imported ones.

“Usually, the used car market is fed by the sales of cars previously purchased in the same country,” Morzharetto says. – We usually sold cars three years after buying a new one. But now people do not want to part with them – they will travel for 4-5 years and more. Due to this, a shortage of used cars is created in the market; therefore, they bring us even more cars and they will be brought from abroad. From Europe, the road is practically closed: used cars are now supplied mainly from Japan (so we will have more and more right-hand drive cars) and in the future, perhaps, flows will be established from China.

Share
Facebook
Twitter
Pinterest
WhatsApp
Previous article
In Kolyma, a case was opened after a video about child abuse appeared KXan 36 Daily News
Next article
How to eat and not gain weight on vacation KXan 36 Daily News