HomeLatest NewsGaramendi culminates his plan and snatches the lobby with Congress from Sánchez...
Latest News 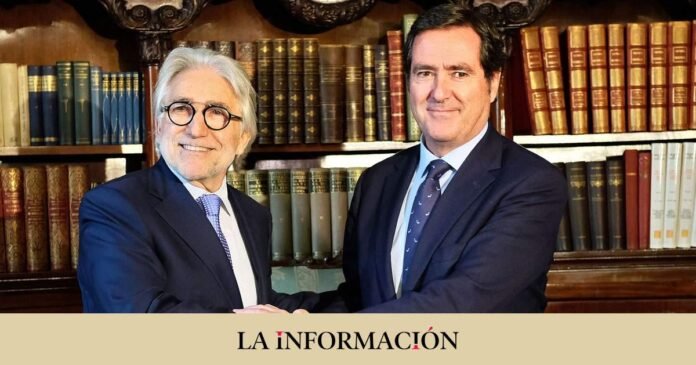 A slow and carefully measured maneuver. At least, thus definitely from within the CEOE the operation that has culminated in the ‘exile’ of Josep Sánchez Llibre. The president of the Catalan employers’ association Foment del Treball continues as vice-president in the new organization chart of the national business organization, but relegated to a second level, below the first vice-presidency with which Antonio Garamendi wanted to reward the leader of Madrid businessmen, Miguel Garrido, for his support in the elections. And he de facto loses the power of lobbying with political groups, which has been taken from him with the creation of a Commission for Relations with the Courts granted to the president of the Valencian employers’ association, Salvador Navarro.

In 2016, the then president of the CEOE, Juan Rosell, entrusted Sánchez Llibre with the business organization’s relations with Congress and the Senate. He had been a deputy for the Unió Democràtica de Catalunya – a party in which he had been a member since 1985 – in various legislatures between 1996 and 2015 and when he moved to the CiU federation he held various positions of responsibility. Before coming to Congress, he was a regional deputy in the Catalan Parliament, between 1988 and 1993, and in 1992 he was appointed senator for Catalonia. The former leader had extensive experience in relations with the courts, more than enough endorsement to “put on the suit” of a lobbyist and manage to place amendments to the laws in defense of business interests through the different parliamentary groups.

Since then, Sánchez Llibre has been developing this work from his position as vice president of the CEOE, with a ‘subtitle’ in the position of person in charge of relations with the Cortes. He has maintained fluid relations with the parliamentary groups and in the last stage, above all, he has maneuvered with the opposition to try to stop the legislative initiatives of the Government in economic matters that the employers have considered harmful to the companies. From the labor reform (which the CEOE supported with the rejection of Foment) to the tax on large fortunes or banks. These are issues that require intense lobbying activity and the Catalan businessman has been carrying it out. Although Garamendi began to strip him of these powers silently a long time ago.

The president of the CEOE had no objection to Sánchez Llibre presenting amendments to deputies and senators on behalf of the CEOE, as the person in charge of relations with the courts, however, at one point changing a decision was the first step to snatch this power to the president of Foment. Specifically, Garamendi gave the order that all the texts, before being presented in parliamentary instances, possibly go through the General Secretariat of the business confederation, a department within the organizational structure of the employers headed by José Alberto González-Ruiz Martínez . From that moment on, all the amendments must have the seal of the CEOE, which is a way for the Presidency to have control of the content and guarantees that the defense of the general business interest and not of particular interests or specific companies is complied with. .

A different thing is that Sánchez Llibre, as head of the Catalan employers’ association, can promote his own amendments. “He has a double card, that of vice president of the CEOE and that of president of Foment,” recall sources around him. In his trusted team, they downplay the fact that the Board of Directors, at the proposal of Garamendi, has created a new Commission for Relations with the Courts and has handed over its address to the president of the Valencian employers’ association. They talk about “noise”. “The president wanted to set up a technical-level working group for this area and we have no problem with this,” they say. “We are not worried about the parliamentary lobby because Josep maintains his own relations with the groups, the same as Garamendi with the ministers,” adds one of his collaborators.

Although Foment is officially disseminating the version of the ‘peace pipe’ -Garamendi opted for a conciliatory and inclusive management after the internal war that broke out on the occasion of the elections- sources from the business organization did not hide their discontent with the new structure of the CEOE, in which the Catalan employers’ association has been relegated to a second level in the ranks of the vice-presidencies. As a result of intense negotiations to tie up the votes of Madrid businessmen, Garamendi has ended up promoting Garrido to first vice president, an unprecedented position that implies that, for the first time, a territorial organization stands above the rest and the employers’ association of SMEs (Brush me). Sources from the CEOE leadership interpret that it is the way to ‘punish’ the wayward people who promote ‘Operation to unseat Garamendi’.

It must be remembered that both Sánchez Llibre, its main promoter, and Gerardo Cuerva, president of Cepyme, were involved, to a greater or lesser extent, in this operation to promote an alternative candidacy to the Basque businessman. Both have been critical of some of the agreements reached at the social dialogue table with the Government, such as the labor reform. Garrido’s name was also on the table, but the man from Madrid refused to take a step forward. In exchange, he negotiated with Garamendi to gain more weight within the structure of the national business organization. A negotiation that has culminated in his appointment as first vice president and the consequent degradation of the Catalan employers’ association and of Sánchez Llibre within the CEOE.

Share
Facebook
Twitter
Pinterest
WhatsApp
Previous article
President of VSS Ufimtsev: What will be the fine for the lack of an OSAGO policy and how they want to catch violators KXan 36 Daily News
Next article
The “communists of Russia” proposed to reduce the New Year holidays due to a special operation KXan 36 Daily News