HomeLatest NewsGaramendi puts the bank in the leadership of CEOE in the middle...
Latest News 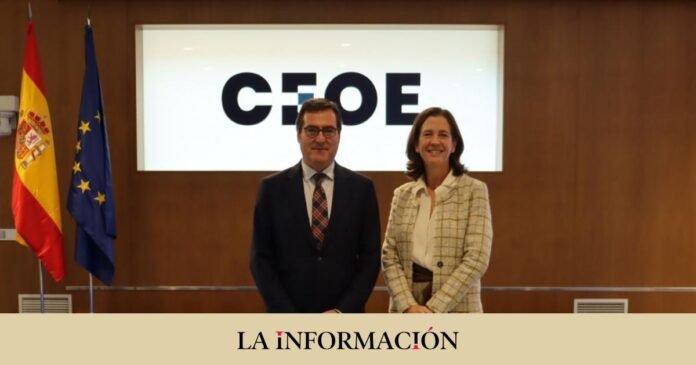 Antonio Garamendi’s rudder stroke. The recently re-elected president of the CEOE rearranges the organization chart of the business organization to face a new stage in relations with the Government. In a delicate economic context, in which the Executive is promoting a roadmap that is essentially contrary to the interests of large companies to protect the most vulnerable groups from the effects of escalating inflation, the Basque businessman places the banking employers at the top of the confederation. It is not a trivial movement, since the president of the AEB, Alejandra Kindelán, is the great promoter of the lobby of the sector against the new tax that the Government has created, approved that Wednesday by the Senate, and the main interlocutor with the economic vice president , Nadia Calviño, with whom he has closed important agreements.

The Board of Directors of the CEOE has appointed, at the proposal of President Garamendi, Alejandra Kindelán as the new vice president of the employers’ association. Together with María Helena Antolín, vice-president of Grupo Antolín, who also joins the vice-presidencies of the national organization, they come to reinforce the government and decision-making bodies, replacing the president of the employers’ association of the electric companies AELEC (formerly UNESA ), Marina Serrano, and the president of the pharmaceutical company Grupo Juste, Inés Juste. And they do so from two key sectors at the moment: banking and large industry, both immersed in crucial restructuring processes and fully affected by the environment of rising interest rates and the financial and energy costs of companies.

The rise of banks in the structure of the business confederation is seen as a success in the sector. Garamendi has always extolled the figure of banks as drivers of the economy and has defended their essential role in public-private collaboration with the Government since the outbreak of the pandemic in procedures as relevant to companies as ICO credits. And the employers of the sector have to better understand the needs of the economy and companies in different sectors”, as well as to reinforce “the ability to support the real economy”, in the words of Kindelán herself.

The head of the country’s main banking association has also highlighted in a statement that Spain, through times “marked by uncertainty and continuous change” and, in this context, has opted for “being united to continue contributing, from the private sector, sustainable economic growth and job creation”. “I cannot imagine a better place than the CEOE to help companies, large, medium and SMEs, the self-employed, and ultimately Spanish society to find solutions to their challenges. This has always been and will be the reason for being of the banking sector”, concludes the brief letter from the already vice-president of the business confederation at the national level.

The rise of the president of the AEB in the ranks of the employers’ leadership coincides with the prelude to the legal battle that the banks are already preparing against the Government for the new tax that will tax the benefits of the entities for the years 2022 and 2023. The bank employers have been pulling strings in the CEOE for months to try to stop the government initiative. And also through BusinessEurope, the European employers’ association, which at the beginning of the parliamentary process came to address a letter to community authorities in which it warned of the impact on companies and the economic recovery of the extraordinary measures adopted in different Member States in tax matters, on which the representatives of European businessmen express their concern.

It must be remembered that the employers, beyond putting pressure on the Government to try to withdraw the measure, cannot appeal it in court because they are not a taxpayer, therefore, it came from the decision made by the banks. And some entities have already forcefully announced that they will appeal it, as is the case with Bankinter. “The day after paying it, we are going to appeal it,” its CEO, María Dolores Dancausa, has publicly assured. Others, such as Santander, Caixabank, Sabadell or BBVA have also positioned themselves in this sense to a greater or lesser extent, although without revealing their plans to date. The legal machinery is underway and at this time “all options are open”, indicate sources in the sector who clarify that “in any case, the appeal must be made when the tax is paid”.

Kindelán has defended the interests of the sector “in a forceful way” within the CEOE, as they stand out from within the business organization. A source from the Board of Directors recalls that in a meeting of the government bodies held last July, the representative of the sector raised the alarm about the tax and charged the Government for misrepresenting the benefits of the bank in its argumentation and use them as an excuse to raise taxes. According to this source, Kindelán explained in the top-level business conclave that the Executive cannot speak of extraordinary benefits to justify the fiscal saber because it is a normalization of interest rates that, on the other hand, does not ensure an improvement in the profitability and could be accompanied in the future by an increase in arrears, higher provisions and portfolio depreciation.

The president of the AEB has not only maneuvered inside and outside the CEOE to deactivate a tax that, considering that it generates a problem of double taxation, is contrary to the principles of equality and non-discrimination and would negatively affect the economy and employment. Kindelán has also been “very skillful” in dialogue with the Government and especially with Vice President Calviño, with whom she has reached important agreements. Sources from the business organization highlight the one signed at the end of November to help up to one million families to mitigate the impact of the continuous and accelerated rise in interest rates on the payment of the mortgage payment. “She is a great negotiator, firm and a good defender of the interests of the sector,” she highlights from the CEOE.