HomeLatest NewsGeneticists have learned to resurrect: the Earth will be inhabited by mammoths...
Latest News

Geneticists have learned to resurrect: the Earth will be inhabited by mammoths and saber-toothed tigers 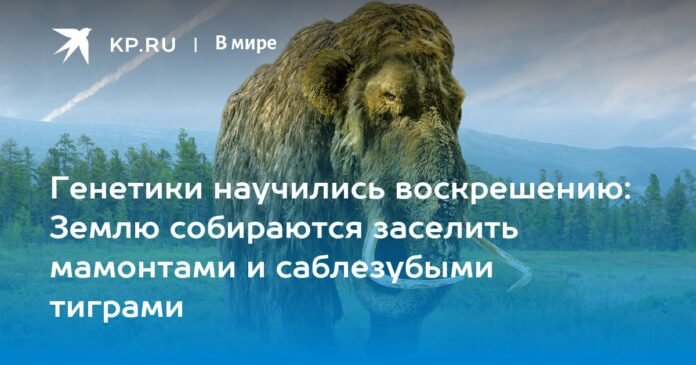 The Extinct Species Resurrection Program can bring extinct animal species back to Earth.

Experts say: we live in the era of the Sixth mass extinction. Although the human population is constantly growing. But the planet’s biodiversity is rapidly vanishing. According to UN forecasts, by 2050, about one million species of plants and animals will be on the verge of extinction. And we, the people, are the main culprits for this. We are guilty of destroying the natural habitat of wild animals and polluting the atmosphere. But we have a chance to redeem ourselves. Its name is the program for the resurrection of extinct species.

No, this is not some forgotten novel by HG Wells or Isaac Asimov. Nothing science fiction. These are real experiments that are currently being carried out in the world’s leading biolaboratories. First in line for resurrection is the marsupial wolf (another name is thylacine).

The marsupial wolf became extinct on most continents two thousand years ago. The only place on the planet where these individuals remained was the Australian island of Tasmania. As the only marsupial predator, the thylacine played an important role in the ecosystem. However, when European settlers arrived on the island in the 19th century, they immediately took a dislike to the wolf, accusing it of preying on livestock. Although in reality in most cases the culprits were wild dogs. Outsiders declared war on the thylacine and hunted it until the species was completely exterminated.

The last marsupial wolf named Benjamin died in 1936 in captivity at the Beaumaris Zoo. Despite the fact that at that time the thylacines were under protection, it was already too late: the species could no longer be saved.

The genetic project of Australian scientists consists of several stages. In the first, the researchers will compute the thylacine’s detailed genome and compare it to that of its closest living relative, Youngson’s narrow-legged marsupial mouse, to identify differences.

“We will then take living cells from a marsupial mouse and edit their DNA in all the places where it differs from thylacine DNA. Basically we are designing our dunnart cage to be a cage for Tasmanian wolves, explains Andrew Pask.

If this stage is successful, in the next stage, scientists will try to make the marsupial mouse into a surrogate mother for the future marsupial wolf.

“Our ultimate goal, through genetic engineering, is to return this species to the wild, where it has played a critical role in the ecosystem,” Pask emphasizes.

The marsupial mouse is several times smaller than the thylacine. Its length is on average 7-12 cm, and the Tasmanian wolf is about 50 cm, but as Australian experts explain, all marsupials give birth to small cubs, sometimes the size of a grain of rice. Therefore, even a mouse-sized marsupial animal can become a surrogate mother to a larger individual, at least in the early stages of development.

The main question that worries scientists is how the marsupial wolf will behave after rebirth. And this will require a separate study.

Many scientists around the world are following the success of the Australian company with bated breath. After all, if it ends triumphantly, many animals can come back to life. The American company Colossal has already received a $15 billion grant for research in the field of woolly mammoth resurrection (an Asian elephant should act as a surrogate mother). Other species that could be brought back to life include the saber-toothed tiger, woolly rhinoceros, short-faced bear, and giant sloth. And someone claims that it will be possible to resurrect even a dead-end branch of humanoid primates – Neanderthals. However, the question remains: is society prepared for such an intervention in the course of history?

FIVE ANIMALS THAT ARE ON THE EDGE OF EXTINCTION

1. Sumatran and Javan rhinos are among the rarest animals on the planet. Both species are conserved only in Indonesia. Over the past 30 years, the Sumatran rhino population has declined by more than 80% to fewer than 80 individuals. And Javanese – less than 70. The main reason for the disappearance is poaching (the animal’s horn is used in folk medicine).

Due to poaching, the Sumatran rhino population has declined by more than 80% in the last 30 years.

2. In Russia, the Amur tiger is endangered, sometimes reaching three meters in length and weighing more than 200 kg. This frost-resistant predator is capable of withstanding -40°C, reaching speeds of up to 80 km/h and jumping the height of a two-story house. Their places of origin are the Khabarovsk and Primorsky Territories, the banks of the Amur and Ussuri. The peak of its decline occurred in the 40s of the XX century, then there were about 30-40 individuals. The reduction was influenced by hunting, which was banned in 1947. After that, the population gradually began to recover and now numbers 600 individuals.

Amur tiger in the Moscow zoo.

3. In 2005, according to various estimates, there were just over 10 Amur leopards, but by 2022, the number of rare big cats has risen to 121. This was due to the creation of the Land of the Leopard National Park. Predators live in the south-west of Primorsky Krai, capturing the border regions of China and even North Korea. Basically, poaching has affected their population reduction, their fur is painfully beautiful and valuable.

4. The red wolf was once found in the eastern United States, but in the 20th century, due to ecosystem destruction and shooting, the predator was on the brink of extinction. In the late 1970s, the red wolf disappeared from the wild. Single individuals are kept in nurseries and zoos. In 1987, authorities released several dozen wolves into the wild in North Carolina. Initially, its population grew to 100-120 individuals, but without the necessary control, it fell back to 8 in 2021.

The red wolf is in danger of extinction.

5. Kakapo is a unique parrot. Firstly, it lives for 60 years, secondly, instead of trilling or imitating the sounds it hears, it makes a hoarse chest “boom” and can roll into a squeak, thirdly, the kakapo smells good, in fourthly, it does not fly, small wings, therefore it bypasses its territory and only at night. And this species, which lives in New Zealand, is in danger of extinction: for 2019, 147 individuals are known. Many have beacons installed and given names. The colonization of the islands influenced the decline of the kakapo population: the Europeans brought with them cats, rats, opossums, which exterminated the species, and the Polynesians hunted and hunted. Now the country’s authorities are working to restore the population.

“We recently learned how to preserve DNA correctly”

– Restoring an extinct species is quite difficult. First, you need a living close relative. With mammoths, it is more or less clear: this is an elephant. In general, this is possible, but still the difference between them is great, and they are very distant relatives of each other. Second, you need to restore the DNA of an extinct species. This is quite difficult to do, often DNA degrades and breaks down over time, even if we find whole chunks of frozen mammoth meat lying on the ground. This also applies to the DNA of recently extinct animals. In fact, there are not so many of their well-groomed bodies. You can see them in the form of bones, skins or fully formalized objects. But all these substances strongly destroy DNA over time. Only now have scientists learned how to preserve DNA well – to freeze animals in alcohol. And then the DNA is stored like this for decades, and then it’s slowly destroyed. In addition, it is necessary to understand that the ecosystem is changing. It is possible to restore the animal, but whether it will be able to survive on our planet and continue the race is a big question.