HomeLatest NewsGeopolitical Astroforecast: In 2023, the world will return to the equilibrium that...
Latest News

Geopolitical Astroforecast: In 2023, the world will return to the equilibrium that prevailed before 1991 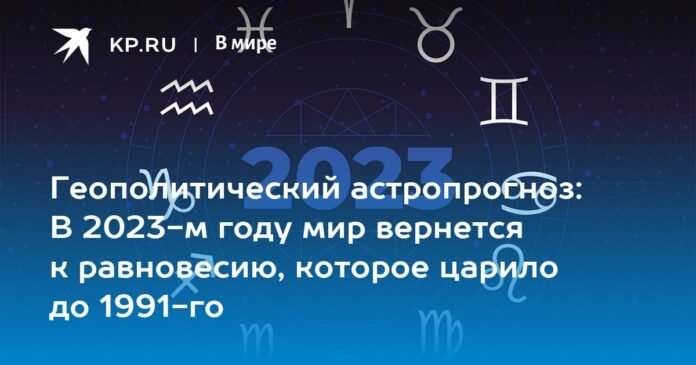 Who else to turn to for a geopolitical forecast for 2023 if not to the sky and the stars? KP.RU spoke with the rector of the Academy of Astrology and the Astrological College Mikhail Levin, who spoke about what the celestial bodies of our civilization are preparing.

– Last year he finished with a deuce, and this is the confrontation number. All three of all problems will not be solved, but something will smooth out. Also, this number is harmonizing and gives a positive dynamic. The crisis that has been growing lately will really end only in 2025, then a stable phase will come. And 2023 will lead to an intermediate balance. The confrontation will continue, but it will soften by the end of 2023. In general, the next year will be easier than the previous one, notes Mikhail Levin.

In 2023, an old factor returns: Neptune’s sextile aspect to Pluto. It was in the sky for almost 50 years, from 1943 to 1991, and maintained global balance, despite local wars, the formation and collapse of alliances. We live in the days of the Cold War, but this confrontation was balanced. There was no feeling that tomorrow the world would collapse. In 1991 this aspect collapsed and the balance was upset. But it comes back in February 2023 and will continue until 2039. I think after this, a sense of global stability will gradually start to return. It will not be the stability of universal love, it will be the stability of the hidden confrontation.

Pluto changes sign for a short time: April, May, and June. He will first touch Aquarius and will return to Capricorn. He will finally return to the sign of Capricorn only in 2025. But the first signs of future changes should already be observed in the next short period. Pluto is a whole generation – 15-20 years in one sign. When Pluto finally entered the sign, global changes took place: it entered the sign of Cancer, World War I began, and World War II entered the sign of Leo. Then there were no wars, but crises, after which the world order changed. Now we are about to change the two world orders. It will mainly affect the western world, since it sets the main course.

The astrological New Year will come on the night of March 20-21. After the day of the vernal equinox, there will be noticeable changes. For Kyiv, this will be a more difficult period than for Moscow. The planet of conflict, Mars, is in the eighth house (the house of death). But in Moscow, its action is greatly weakened (the distance to the top is three degrees), but for Kyiv, Mars is exactly at the top. For Ukraine, I foresee another difficult, stressful and disruptive year.

As for Belarus, the situation there is tense, but it will manage without military action. Rather, there will be internal problems.

The peak of the confrontation between Russia and NATO will end in the spring. Then we will swear, but the danger of a direct military confrontation will disappear. There will be no nuclear war. But this is only a movement towards the end of the conflict, the really hot phase will last all of 2023. The conflict in a non-military form will last for a long time until Europe calms down and the United States does not leave the world stage until the Ukrainian people find a agreement within itself (and this can only happen at the end of the century). .

For States, 2023 is a difficult year, but not of a military nature, but financial and political. The eighth house is influenced by the Sun (general tension), Mercury (commerce) and Jupiter (money, banks). I hope that a complex crisis picture will prevail there. The United States is facing a serious political crisis, partly financial. The dollar will not collapse. But starting in 2023, the US enters a prolonged period of escalating crisis from which it will not emerge this century. From 2035 to 2041, the United States will withdraw from the world stage. They will go back to being isolationists, as they were before 1916, they will deal with their internal affairs, ceasing to fulfill the role of world gendarme. This process will start slowly now.

Brussels, the capital of the EU, here the stellium is located in the upper part of the 5th house (house of power), the tension will occur at the level of the European authorities. The hostilities will not directly affect the countries of the European Union, only indirectly: they also have Mars in the eighth house, but weakened. It appears that indirect participation will manifest itself through the supply of arms and mercenaries.

CHINA WILL CONTINUE WITH THE RECOVERY

China has a stable situation next year, the trends of last year will continue in 2023. However, Beijing is starting to move away from the West, that is, from the US, and will move closer to Russia. The most interesting thing in the future of China is expected in the mid-2030s, when it will bully the United States, and a confrontation between Beijing and Washington is not ruled out. Moscow can also take an indirect part in it, as was the case during the Vietnam and Korean war in the last century. This confrontation will probably end with the defeat of the United States sometime in 2035, its economic activity will go on and on, but military leadership in the world will wane. China will maintain its position as the world’s economic and possibly financial leader. But Beijing is unlikely to be an ideological leader, its era is long gone. In matters of military leadership, it is worth remembering that the Chinese are a non-aggressive nation, prone to diplomacy and defense. They are not prone to expansion, no matter how many weapons they have accumulated. It will be a great feat if Beijing can retake Taiwan.

RUSSIA WILL NOT COLLAPSE IN THIS CENTURY

The economic situation is difficult, but not destructive. Despite all the difficulties, there is a good chance that we can maintain balance. I don’t think the Russian sanctions will be lifted, but the overall financial picture will improve markedly from the late spring and summer. The economy will stabilize and may even begin a slow recovery. There is a global restructuring of social relations: a change in the form of property, a change in the relations between large, medium and small companies, businessmen and authorities. The entire socioeconomic structure is slowly being rebuilt in both 2023 and 2024. These changes will also affect the financial structure. Russia cannot collapse either now, or in the near future, or in general in this century. There is a strengthening of the central government, which is expressed in the restoration of order, even in the entire bureaucratic structure. Also this year, the activity of local authorities will increase, apparently, they will be given more rights. There will be an attempt to improve social security, but it is likely that in early 2024 some problems in this area will begin to be exposed.

Share
Facebook
Twitter
Pinterest
WhatsApp
Previous article
What will happen to the prices of taxis in Moscow on the New Year holidays? KXan 36 Daily News
Next article
This is how this young woman earns more than 3,700 euros a week with her business