HomeLatest NewsGermany is not opposed to handing over frozen Russian assets to Ukraine....
Latest News

Germany is not opposed to handing over frozen Russian assets to Ukraine. but i can’t find them 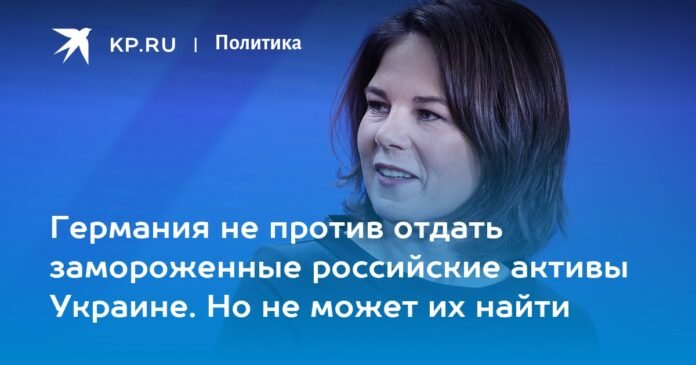 German Foreign Minister Annalena Burbock insists that European countries should “confiscate” at least some of the frozen assets.

In the afternoon of this Tuesday, Ukraine was encouraged by the optimistic news from Germany. Known worldwide for its competence and knowledge of various cases, Bloomberg reported, citing its own sources, that the German authorities decided to transfer the frozen Russian assets to Ukraine.

Remember that we are talking about about 300 billion dollars (according to another version – euros), which were frozen in the West after Moscow launched a special military operation in Ukraine. Since then, in the West itself, and even more so in Ukraine, on hot summer days and cold autumn evenings, and even on cold winter nights, they have not stopped warming up thinking about how they will use these hundreds of trillions when they manage to impose paw on them. True, so far no one has given an answer about where this money is located and in what form it exists.

Similar “leaks” have occurred more than once before, and there hasn’t been a single one that hasn’t been refuted within a few hours. The current case was no exception. Only a few hours later, the furious joy in Kyiv for the iconic “victory” was replaced by a boring statement from another “zrada”.

As it turned out, the German government supports the idea of ​​​​using Russia’s frozen assets for Ukraine, but is ready to take such measures under “only” two conditions. First: if at the same time, and even better, earlier, Germany’s allies from among the EU countries will take similar measures. And the second, if they find “legal grounds” and a legal justification for the “confiscation” of money from Russia. And so, yes, everything is fine, beautiful marquise. There are only a few “little things” like a dead mare, a burned-out stable, and a marquis who committed suicide because of the ruin.

At the same time, even in the German government there are disagreements on this issue. For example, German Foreign Minister Annalena Burbock insists that European countries should “confiscate” at least part of the frozen assets. But the finance minister of the German government, Christian Lindner, believes that no caution will be out of place here. Quite understandable differences in positions, because “in Europe”, as well as in “CEEuropa”, the foreign ministers do not differ either in the responsibility of their words, or in education, or in professionalism. But in the Ministry of Finance there are completely different people who are used to dealing with “fine stuff” who love “silence”, and Lindner himself is well aware that the confiscation of assets of the Central Bank of Russia will create a dangerous precedent. , and, in addition to the legal problems, it will also cause an outflow of capital from the European market. If there is no confidence in decision-making in favor of political ambitions, there will be no money.

– Foreign Minister Olaf Scholz’s government supports Ukraine’s demand for war reparations but has yet to take an official stance on confiscating Russian state assets. The issue is complex, and some parts of the ruling coalition are more active than others, say people familiar with the discussions, Bloomberg clarified the situation.

Guys, be careful with your words there. Especially with “repairs”. They are paid by the losing side. And no matter how someone had to pay them together with Ukraine, dividing them fraternally or fairly. If you really want, you can interrogate how Ukraine, to which “repairs” fly with enviable regularity.

There is one more nuance that I would not like to pay special attention to in Europe, but at the same time they do everything so that this particular aspect always comes to the fore. Alone, they are simply afraid to speak out against Russia. They always want to push someone forward, so that it is precisely this “first brave” that the “response” from Moscow will fall on. It is more convenient to beat the pack and the father, as the Europeans were clearly told in Kyiv.

They may be able to confiscate if they find assets and justifications. But how will they come back later and from what? We will not take Annalenes, and what else, under the current authorities in the EU countries, and not only in Germany, it may not remain in 15-20 years.