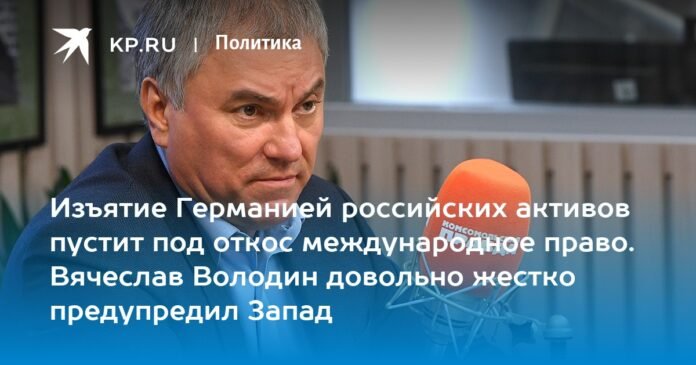 Chairman of the State Duma of the Russian Federation Vyacheslav Volodin.

Vyacheslav Volodin, Speaker of the Lower House of the Russian Parliament, on his Telegram channel, warned the West rather harshly that Germany’s planned seizure of Russian assets, for transfer to Kyiv, will start the process of ignoring international law for part of other countries, when “They will take what they deem convenient at their discretion”.

(That is, if he begins the process of abandoning international law, he will in fact leave this very law, whose hopes, it seems, still remain derailed.)

The president of the State Duma recalled that not long ago, former German Chancellor Angela Merkel admitted how, together with French President Francois Hollande, they “misled the international community” by using the Minsk agreements to militarize the Kyiv regime.

Volodin emphasized that the current German authorities decided to shift the problems created by their predecessors in high positions to Russia, and it is for this purpose that they plan to “seize Russian assets to restore Ukraine.”

Let me remind you that on December 7, former German Chancellor Angela Merkel called the Minsk agreements “an attempt to give Ukraine time” to “get stronger.” At the same time, Ms. Merkel, clearly continuing the same thought, without her usual diplomacy, noted that the current Ukraine militarily “is not what it was in 2014-2015.”

And on December 30, the lady already echoes (it’s interesting, did they agree, or what?) Another former president of France, Francois Hollande, who also claimed that the Minsk agreements allowed the Ukrainian army to strengthen and “stopped the offensive of Russia.” for a moment.”

The “loud thoughts” of this figure are distinguished by a particular cynicism, so it makes sense to quote the statement in its entirety.

“Since 2014, Ukraine has strengthened its military potential. In fact, the Ukrainian army has become completely different … It is better trained and equipped. The merit of the Minsk agreements is that they gave the Ukrainian army that opportunity.”

An abomination also derives from such Hollande’s words; according to him, an example of this “is clearly visible on the battlefield.”

Although Russia then and now had a completely different goal – to protect the Russian Donbass, its inhabitants…

This remains the main task of the special military operation today, along with the denazification and demilitarization of Ukraine.

The president of the State Duma also said that Merkel and Hollande are figures who, having sabotaged the Minsk agreements (and deceived the international community, Volodin points out in his same statement), in the understanding of the world community, become the guilty of the conflict. in Ukraine.

“Having signed the Minsk agreements,” we read on the Telegram channel of the Chairman of the State Duma, “they were not going to fulfill them, but only used them to militarize the Kyiv regime and prepare it for military operations against civilians in Donbass and Crimea”.

Share
Facebook
Twitter
Pinterest
WhatsApp
Previous article
IAC: Seagulls became the reason for the A321 crash landing in a cornfield in the Moscow region in 2019 KXan 36 Daily News
Next article
Peru imposes new sanctions on Repsol for the oil spill on its coasts