HomeLatest NewsGive with one hand, take with the other. Revealed the terrible...
Latest News

Give with one hand, take with the other. Revealed the terrible truth about the allocation of 45,000 million dollars for Ukraine 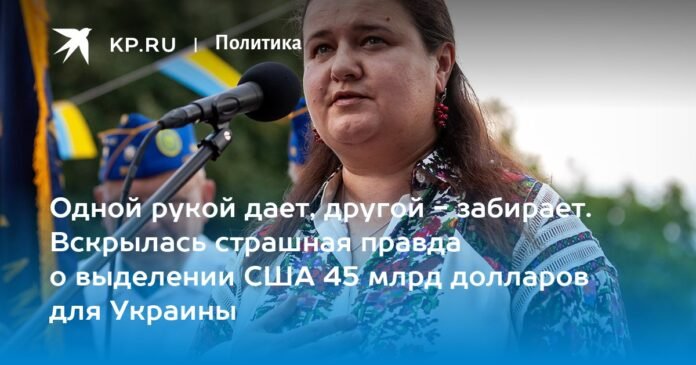 Ambassador of Ukraine to the United States Oksana Markarova

The amount that the United States has agreed to provide in assistance to Ukraine in 2023 is staggering. $45 billion is more than half of Ukraine’s budget (according to plans, the spending part of the Ukrainian treasury will exceed $70 billion). Ukraine’s revenues were assumed to be $34 billion, with the $36 shortfall to be covered by the Kyiv regime’s Western backers. It turns out that the Americans decided to pay for everything at once, and even add more?

It does not work.

As it turned out, the United States gives with one hand and immediately returns it with the other. Such, in fact, is a setback at the state level.

Ukraine’s Ambassador to the United States Oksana Markarova explained what this gigantic money will be used for. Ukraine’s $45 billion in aid will get well if half.

The bulk of the funds, $28.4 billion, is military aid. It includes:

– 11.88 billion dollars to replace the weapons already transferred to Ukraine in the US arsenals (that is, the US will immediately hand over this money to its military-industrial complex, and then they will take the brand-new Haymars to its warehouses) ;

– Another $7 billion – for the US European Command.

– $ 9 billion, that is, less than a third of the total amount of military assistance, will go to provide the Armed Forces of Ukraine with everything necessary, from equipment to intelligence (for which the Pentagon will also transfer money, for course, himself).

– $13.37 billion is, in fact, economic assistance to Ukraine. That is, there is no question of covering the deficit of the Ukrainian budget. But few people will be surprised when it turns out that many of the expenses listed in the “financial aid” column will actually generate revenue for American structures and businesses. This is clearly seen in humanitarian aid: $4.92 billion is allocated, but the US Ministry of Health will receive half, to help Ukrainian refugees.

You need to understand that the $45 billion is not aid in the classical sense, it is another part of the foreign debt of Ukraine. And if you take into account the multi-billion dollar injections of the past, it turns out that supporting the conflict in Ukraine is becoming a very profitable business for the United States.