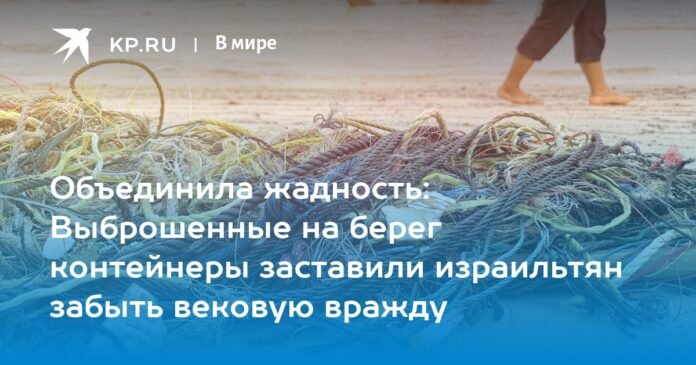 A storm in the Mediterranean Sea resulted in the fact that several containers were washed over the edge of a merchant ship in the port of Ashkelon, Israel. Soon the lovers began to come to the beach to profit from darmovshchina.

Arabs, Orthodox, secular Jews and other representatives of the Israeli multinational society forgot about their enmity and united for a while to snatch as much “seafood” as possible.

And different things were washed ashore, from packages of disposable tableware to refrigerators.

“Look at the unanimity! – commented on social networks the locals on the beach.

According to old-timers, even in the summer there were no traffic jams at the entrance to the coast in the Ashkelon area as now. At the same time, neither cold water, nor stormy waves, nor the presence of nearby political opponents stopped the connoisseurs of the gifts. At the nearby gas stations, everyone, with the air of conspirators, asked the same question: “Have you gone or are you leaving?”

People came to shore in cars, trucks, ATVs and mopeds, some fearlessly rushing into the cold water in search of prey, while others were content with what lay on the shore.

“There is everything here, from baby nipples to household items and even blankets,” one of the marauders gleefully shared with reporters.