HomeLatest NewsHe fooled everyone again: Why Zelensky couldn't be in Bakhmut on the...
Latest News

He fooled everyone again: Why Zelensky couldn’t be in Bakhmut on the eve of his trip to the US. 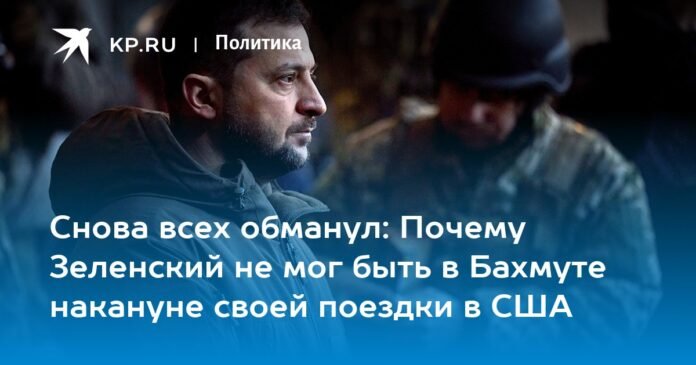 Yesterday’s unexpected appearance of Zelensky in Bakhmut stirred the Net no worse than today’s urgent flight of the President of Ukraine to Washington. As Zhvanetsky said, “on business, urgently.” But, if Zelensky’s visit to the United States does not raise any doubts, the same cannot be said of Vladimir’s stay in Bakhmut the day before.

Washington is preparing for the official visit of the President of Ukraine.

Ukrainian bloggers and administrators of Telegram channels themselves drew attention to the discrepancy between the environment and reality. Since Zelensky was filmed against the background of some kind of production facility, against the background of almost a whole factory workshop, some even demanded that the Office of the President of Ukraine indicate the geolocation in which particular workshop the president was filmed, since not a whole production plant remained in the city. There are no sounds of explosions or gunshots in the video, and this despite the fact that there is fighting in Bakhmut (also known as Artemovsk). Which, by the way, is confirmed by other, more realistic videos of the Armed Forces of Ukraine from there.

But let’s approach the issue from the other side. Let’s look at the logistics of moving Zelensky to Bakhmut and back to Washington. And we go in the opposite direction. The first reports of the plane landing with Zelensky at Andrews Air Force Base in suburban Washington appeared around 10 a.m. Moscow time. Then there was a flurry of reports about Zelensky’s arrival in Washington around 2 p.m.

Given: The flight from Frankfurt am Main to Washington (Ramstein airbase is located near Frankfurt and Andrews airbase is half an hour drive from the center of the US capital) takes about 9 hours. Therefore, Zelensky had to fly out of Germany between 1 am (Moscow time) and 5 am in order to arrive in this time slot.

Let’s go over there. The path from Poland (provisionally from Warsaw) to Frankfurt am Main, since it is unlikely that the plane with it was allowed to land at a military airbase (although if the plane with Zelensky landed on the strip of the airbase in Germany , this does not change much) will also take about 2- x hours. Boarding, engine warm-up, taxiing, takeoff and landing, etc. One more hour preparing the plane for departure to the United States. Minus another 3 hours, we get a flight from Warsaw in the period from 22 pm Moscow time to 1 am.

According to information from Kyiv, Zelensky went to Poland by train. Even if it is a special letter train, which goes a little faster than usual, which takes 14-16 hours from Kyiv to Warsaw, it will take at least 12 hours on the way. That is, Zelensky had to leave Kyiv for Warsaw in any case no later than 1 pm More precisely, from 10 am to 1 pm Moscow time.

But after all, Zelensky, who, together with his retinue, allegedly went to Bakhmut to the front, still had to get to Kyiv. And this is not the easiest task either. Let’s say Zelensky and his team drove to the nearest regional center by car and from there flew to Kyiv by helicopter. There are 3 such centers: Dnepropetrovsk (in the new name Dnipro) Zaporozhye and Kharkov. Leaving Kharkov is not the safest thing now, but we’ll leave it. So given: the Mi-8 helicopter, which, according to its technical characteristics, develops a speed of up to 270 kilometers per hour. On the paper. Because in reality, rarely someone and when you fly over them faster than at a speed of 180 km / h. From the Dnieper to Kyiv 390 km, from Zaporozhye 452 km, from Kharkov to the capital of Ukraine 419 km. In any case, about 3 hours or so. That is, we are talking about the departure from these cities to Kyiv from seven in the morning to 10 in the morning Moscow time (Kyiv time from 6 am to 9 am)

But, after all, they also had to be reached from the Bakhmut front line, on which and around which fierce battles are taking place. We take the same regional centers. It is 307 kilometers from Bakhmut to Zaporozhye, 264 kilometers to the Dnieper, and 218 kilometers to Kharkov. The route service gives from 3 to 5 hours on the road. That is, from 1 am to 6 am local time. And something around Zelensky is missing all night in the replicated video. If Zelensky went all the way from Bakhmut to Kyiv in a car, then add another 7-9 hours here. That is, on the contrary, unscrew the arrows the same amount earlier.

And this, without eating, without breaks on the way, without traditional cucumbers for any business trip, boiled eggs and chicken on the way, which a caring wife will put in a travel bag (actually a joke, because the legal wife from Zelensky Olen lives mainly in one of the European countries, arriving in Kyiv on the occasion of the upcoming appointment with several foreign VIPs). No smoking breaks, natural needs management, etc.

At the same time, the first messages about Zelensky’s stay in Bakhmut in the Ukrainian segment of the Network appeared at 1:00 p.m. Kyiv time. At 13-31 there was a record that Zelensky was in Bakhmut, at 13-48 – that he had left him. And according to information from all of Kyiv itself, the messages were delivered with a two-hour delay. That is, Zelensky was allegedly in Bakhmut at 11 am. Where he, according to our calculations, simply could not be at that time, because he was preparing to leave for Warsaw.

That’s how ugly things are. According to these calculations, Zelensky simply could not be in Bakhmut on Tuesday. And it turns out that he again, for the umpteenth time, deceived everyone with his inflated heroism. He deceived his compatriots, who admired his heroism, he deceived the Europeans, whose eyes widened with fear at the “man of the year”, he deceived the Americans, to whom he went to ask for money and weapons. He just can’t help it.

Guys, you got screwed! And you eat there, and look, don’t get dirty.